I have mixed feelings about this one. Felt like Lynch already reclaimed Twin Peaks for himself in the final episode of the series. Sheryl Lee is great, and it’s a good movie about her increasingly troubled youth, dodging her upright boyfriend James to hang out with drug-supplying Bobby (who kills a guy in the woods), and grappling with her realization that her tormentor “Bob” is actually her father. Lynch’s heart may have been on poor Laura’s side, wanting to spend time with her while she was alive, but it comes off as a redundant prequel, full of fan-servicing cameos by the show’s cast and decisions based more on actor availability than artistic concerns.

Lynch practically writes Agent Cooper out of the show, replacing him with Chris Isaak (and wonderful sidekick Kiefer Sutherland) in a long opening segment about the disappearance of Laura’s associate Teresa Banks and her mysterious ring, but he can’t write out Laura’s best friend Donna. Lara Flynn Boyle was a superstar in 1992, appearing in Wayne’s World and Matthew Modine identical-twin thriller Equinox, so Moira Kelly (With Honors, The Cutting Edge) is the new Donna. The whole Horne family is missing too (Sherilyn Fenn was costarring with Danny Aiello in a movie about the JFK assassination from Jack Ruby’s point of view) though they’re mentioned in the deleted scenes.

Rewatched this the night Bowie died. He has a tiny role in the movie, but fits into Lynch’s netherworld perfectly. I forget some of the Twin Peaks mythology (planning to rewatch some episodes before the new one comes out), but I’m into this brigade Lynch was building of dimension-hopping special agents: Kyle, Bowie and Isaak. Re-reading a Cinema Scope article from when the deleted scenes came out, there are plenty of interesting connections to the series that I missed from not having watched it in 14 years.

Who can identify all the people in Whatever Lodge This Is? There’s Bob and MJ Anderson up front, then we’ve got papier-mache-face, cane fella, old woman, suit kid, and the fake beard brothers. According to a Twin Peaks-dedicated wiki, the old woman is Mrs. Tremond and “her intentions are unclear”. 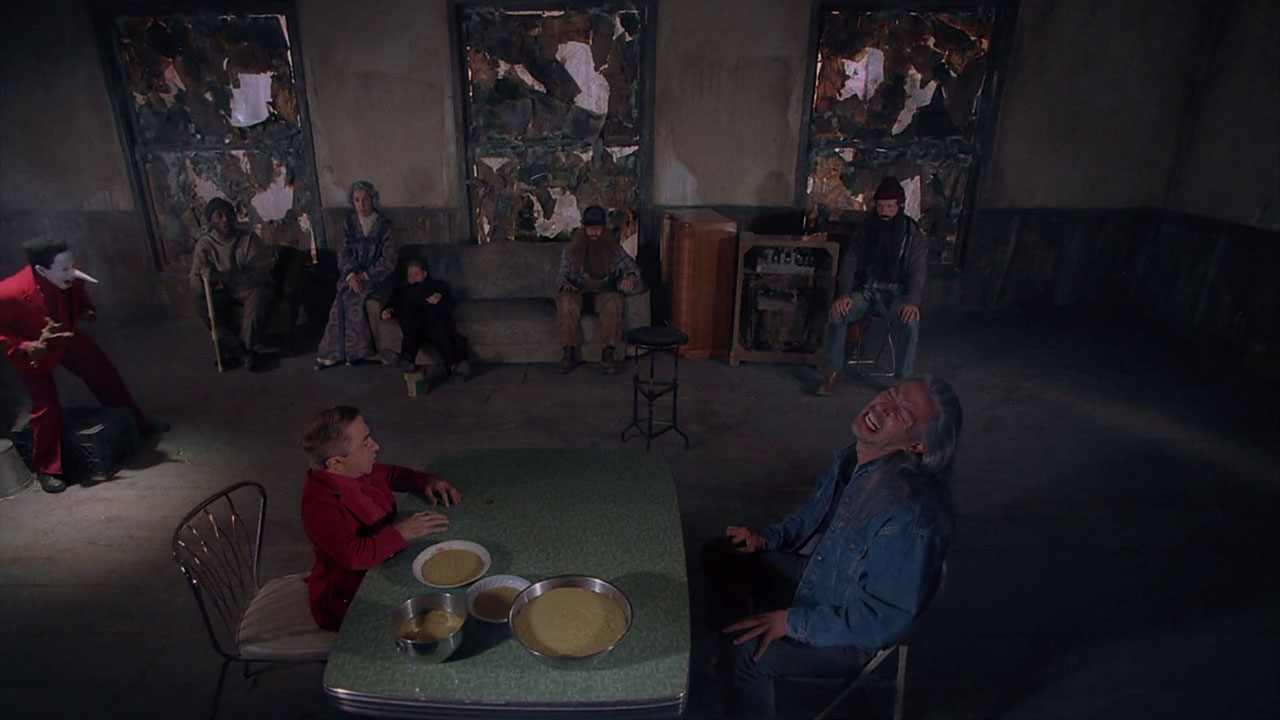 Thanks, Wikipedia… so the red-curtained, zigzag-floored place is The Black Lodge, and that’s one-armed Mike sitting with MJ Anderson (who refers to himself as “the arm” in the film) facing Bob and Leland.