Every camera and editing trick known to man (at the time), in a rhythmic collage of pleasingly odd images. Plucky string music by Paul Mercer on this version.

The women (woman?) of Ballet Mecanique:

Someone allowed a filmmaker to shoot a sold-out boxing match, not knowing Dekeukeleire was a lunatic obsessed with film reversal and superimposition who would shoot anything but a standard angle on the action. Who did the great soundtrack, all pulsing sound effects and breathing? Dekeukeleire was a Belgian film pioneer, made two other influential avant-garde films in the late 1920’s according to wikipedia. 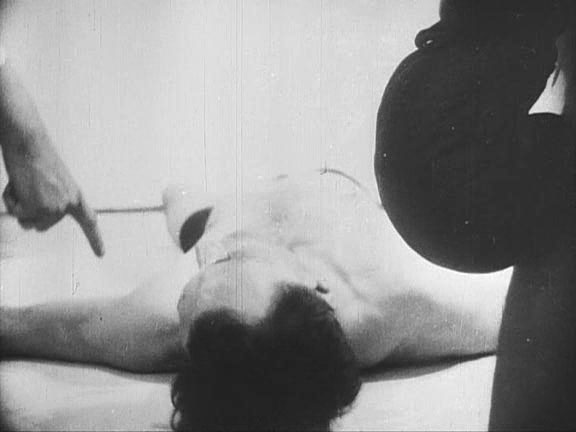 Cornell’s re-edit of East of Borneo, which appears to be a somnambulist jungle picture, highlighting the scenes of star Rose Hobart. Oh wait, he has slowed the film to silent speed, that’s why it looks so dreamy. The not-exactly-fitting-the-mood soundtrack is from a record called Holiday In Brazil.

Cornell’s first film, and his most famous. Reportedly during the premiere screening Salvador Dali attacked the film projector in a rage, claiming the film had been stolen from his dreams. I watched a whole program of Cornell shorts at Eyedrum in the pre-blog era, but hadn’t seen this one before.

Rose chats with a monkey:

B. Frye in Senses of Cinema:

Rose Hobart was only one of several mythologized actresses who populated Cornell’s hermetic world. Many of his boxes were homages to the actresses that formed his pantheon: Lauren Bacall, Hedy Lamarr, Greta Garbo and Deanna Durbin, among others. In Rose Hobart, Cornell holds Hobart in a state of semi-suspension, turning the film itself into a sort of box. She moves her hands, shifts her gaze, gestures briefly, smiles enigmatically, perhaps steps slightly to the side, and little more. The world appears as a sort of strange theatre, staged for her alone.

Okay, what? That is a cynical view of government for the 1930’s. Betty does caricatures of I’m not sure who, and appears to be a communist. Her opponent is Mr. Nobody, who gets booed by his crowd. After she’s elected, her victory parade fades into a giant beer mug, implying the entire film has been a drunken fantasy.

Bimbo and Koko are incompetent, cat-tormenting mad scientists obsessed with their next door neighbor Betty. They accidentally create a Chemical Frankenstein who pursues her before being turned into a flower by her perfume. Insane and wonderful. Nice variation on the ol’ blackface Al Jolson gag.

I don’t watch much opera, so don’t know the plot of Carmen. It seems she lures some fancy man to her sexy lair, then steals his clothes and sells them, buying herself a new outfit. But she fails to impress an even fancier man, the famous bullfighter, so she heads into the ring, dodging the first man who is now trying to murder her, and dances with the bull. Is that the general idea? Oh yeah, Wikipedia says that’s pretty much it, except the first man ends up killing her. The first of Reiniger’s silhouette films I’ve seen and it’s just wonderful.

More opera… guess I never wrote up the Julie Taymor theater version of The Magic Flute we saw last year. It wasn’t a proper Taymor film like Midsummer but a live-televised version of her play. Anyway we both enjoyed. I wouldn’t have figured the carefree singing bird catcher Papageno for a spinoff film, but that’s what we’ve got here, set to the Mozart music. Papageno’s a real hero in this one, fighting off a giant snake that attacks his girlfriend Papagena by harnessing his bird-friends’ powers, like an avian Aquaman. She escapes on an ostrich, is gone for a half minute, which is too long for ‘geno, who attempts suicide, saved by a flock of parrots. Definitely best part is the ending, while the reunited lovers are singing to each other and the birds start rolling in eggs hatching baby Papageni.

There’s a lot of kissing and disrobing in these movies – guess you could get away with sexier stuff in silhouette animation than using actors in the 1930’s.

Making out in the trees:

About to catch an escape-ostrich outta here: