I’ve heard Jean Rollin’s movies are very bad, but I’ve also heard that they’re sensual atmospheric wonders full of naked woman, so finally I am finding out for myself. Started with Rollin’s fourth feature after Rape of the Vampire, The Nude Vampire and Requiem for a Vampire, cowritten by Bernard‘s daughter Monique Natan. The verdict: it’s bad, but it’s true about the naked women, and I also enjoyed the groovy electric guitar music.

Half the cast: newlyweds framed by mute girls: 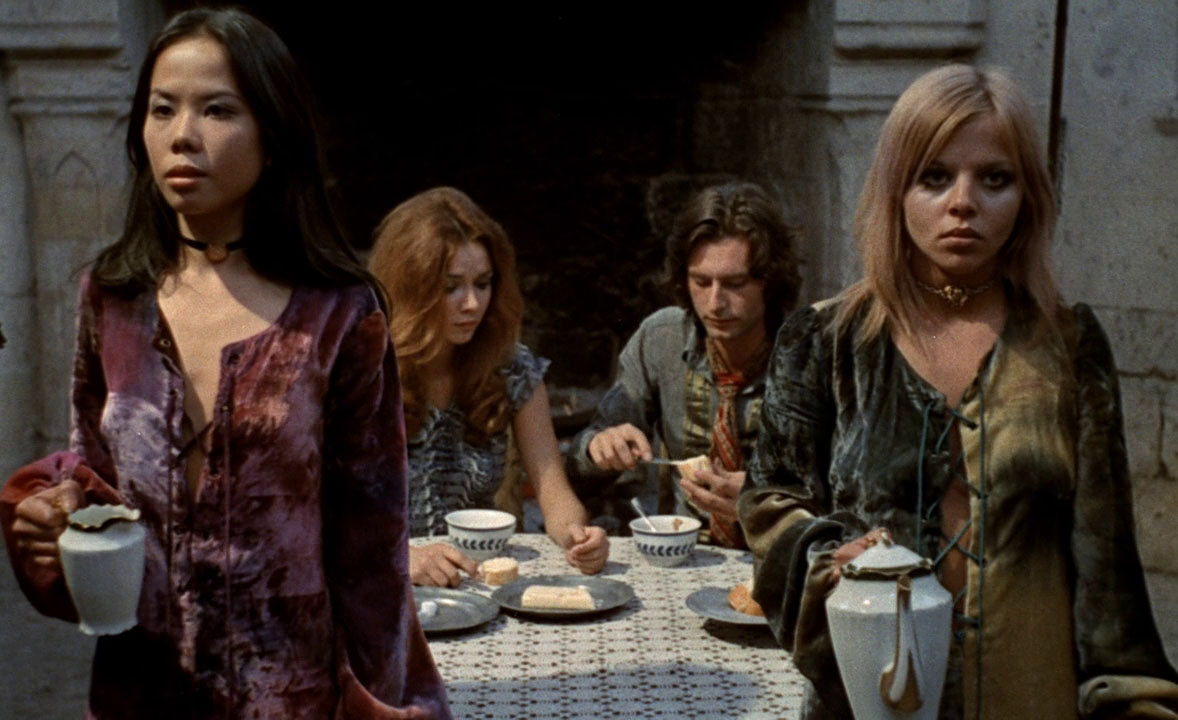 Whatever is going on, we’ve got two women who aren’t saying a word and there’s a coffin ritual and some unhappy guys chained in a castle. I’m starting to suspect vampires. The next(?) morning newlywed Isle (Sandra Julien of Je suis une nymphomane) arrives with her guy (Jean-Marie Durand, who had a career in film doing everything except acting) and learns that the cousins she has come to visit have just died. Then the cousins show up and say no, just a joke, everything’s fine. Isle meets the two silent women and two others: widow Isabelle (Nicole Nancel of Don’t Push Grandpa Into The Cactus) and Isolde (Dominique of Rollin’s previous film), who walks out of a clock. Everyone’s a vampire, of course, and there are playful attacks and serious attacks and lots of boobs, and I think Isolde uses boob-daggers to stab Isabelle in her boobs, and despite all this bawdiness I couldn’t focus very hard because it’s all so terribly dull, the sort of thing that happens when your slow arthouse movie relies on a sense of atmosphere you failed to create. There are some freeze-frames and fun camera pans, but there’s no saving it. One of the cousins was Michel “The Ethnologist” Delahaye, at least.

The Ethnologist and his dark-haired brother in front of some vampire wall art: 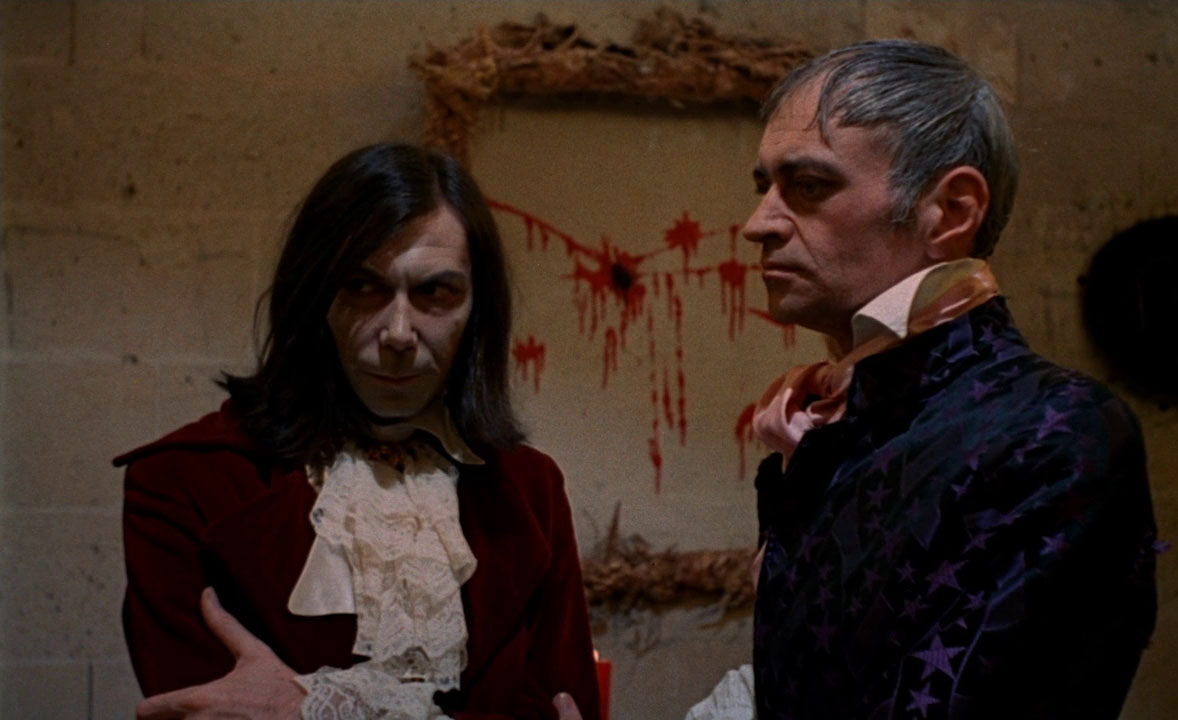 I guess the groom and the two unnamed girls from the beginning help defeat the evil Isolde and/or Isabelle, then the two male cousins and the bitten Isle die on the beach as the sun comes up. It’s possible that the groom Antoine was meant to be our hero, but he also gets beaten up by a library.

Isolde and her daggers… I’m actually trying to avoid nudity in the screenshots because I know all my traffic on this post will come from guys searching for “boobs”, but with this movie it’s difficult: 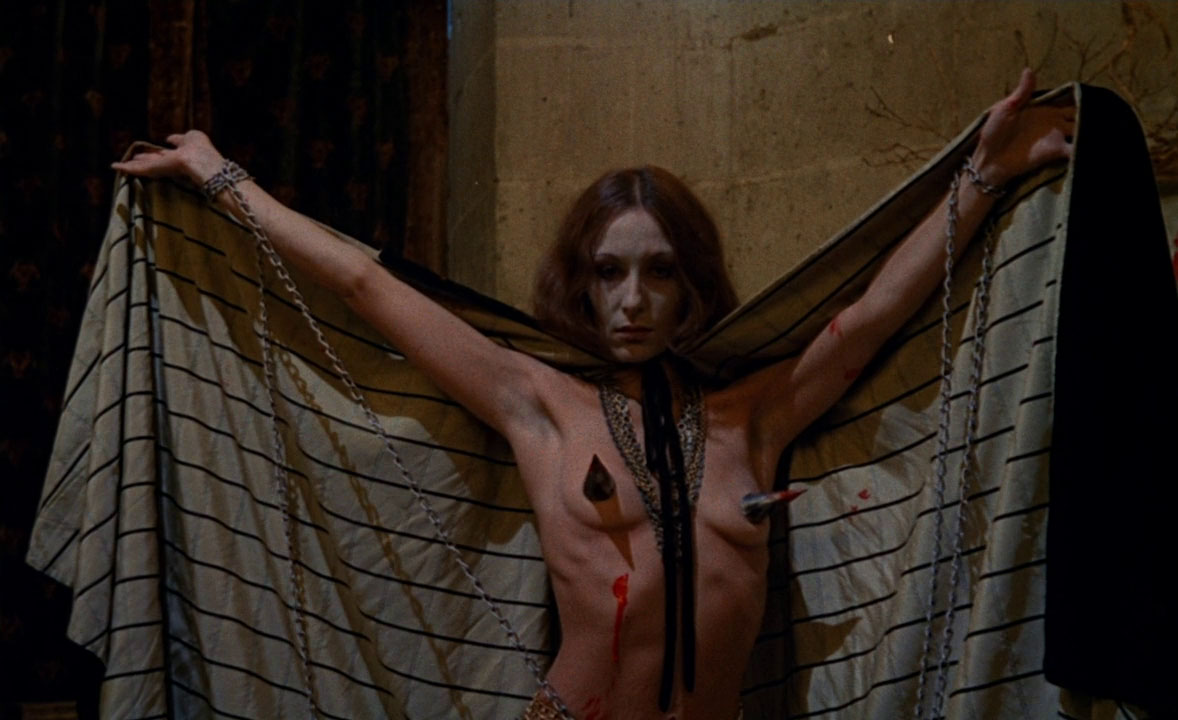 Every wall in the castle where they filmed has been vandalized: 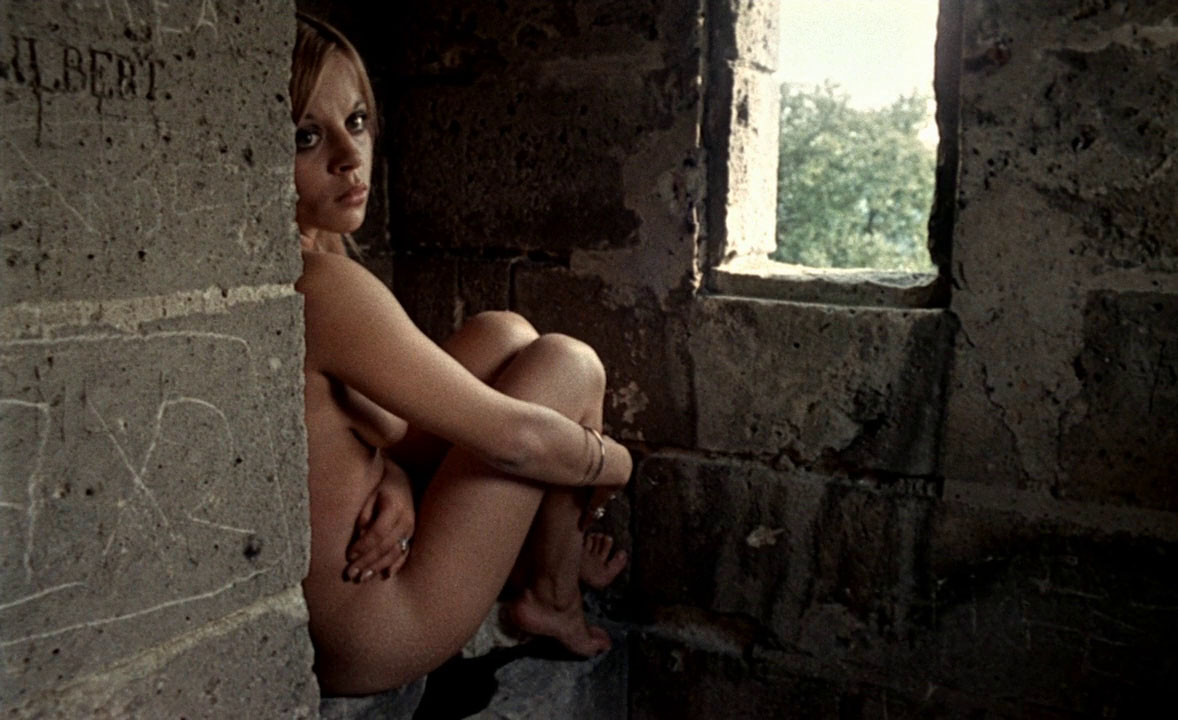