I finished two of these shows on the same day, deciding that’s a good amount of TV to write about, and wondering what to watch next. Looking through the archives I started numbering these posts retroactively, just to amuse myself, and this is roughly the 44th roundup of TV shows.

It’s so hard to decide which Prestige TV Drama I am gonna waste 8-13 hours watching when they churn out a hundred per year and I get around to watching maybe one. This seemed safe, since it’s where Soderbergh had ended up after “retiring” from the film industry. But it took me a year to finish watching, and in that time Soderbergh has released two new films to theaters, so his fake retirement needn’t have been a factor. First half of the season is rocky, mostly unfun, with gruesome surgery scenes (most patients die) and a hella unlikable lead (moody racist drug addict Clive Owen), establishing a whole pile of characters, then the second half lets loose raining down all the drama in the world upon their heads. The writing is trash, actors mostly good, and the style pretty cool, with a terrifically unusual shot every couple scenes and bloopy Cliff Martinez music. Mobile camera, longish takes, some crazy subjective shots and a couple wicked angles per episode. But that trash writing weighs heavy upon the show, and after hate-watching the last couple eps, I’m skipping season two.

Dr. Thackery (Clive Owen, last seen in Valerian) is our hero, a brilliant doctor thinking ahead of his time, addicted to cocaine and morphine and a huge racist, though he becomes enlightened and suddenly stops being racist in episode six, just in time to defend against race-rioting whites in episode seven.

Nurse Elkins (Eve Hewson, a Hanks family member in Bridge of Spies) is the new nurse, sent to awaken Thack with coke injections before surgery. They’re having an affair by the end, and she’s on the drugs but not as hopelessly as he is.

Cornelia (Juliet Rylance of Sinister) is one of the hospital’s all-important rich benefactors. She goes on adventures with the health inspector tracking Typhoid Mary through the city, is a childhood friend of Dr. Edwards, and they have an affair but she decides to marry another rich white person with a pervert father instead. 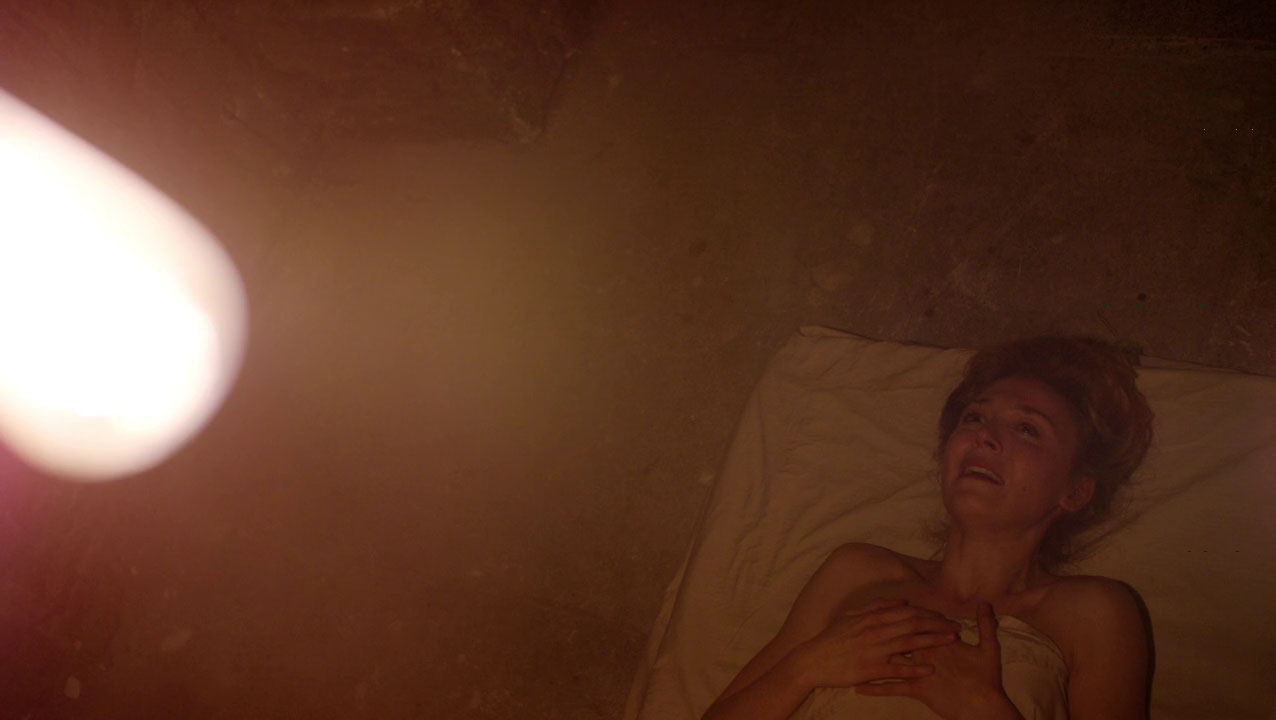 Dr. Edwards (André Holland, Kevin in Moonlight) is just as brilliant as Thack, but black, so nobody respects him except Cornelia and post-racism Thack and he ends up opening his own secret clinic in the hospital basement. He’s asked to abort his own baby after getting Cornelia pregnant, is an excellent boxer, and likes to get his ass kicked in bar fights when frustrated.

The hospital boss is Barrow (Jeremy Bobb of the show Godless and Under the Silver Lake) who sometimes seems underwater from all the drama but can be very determined, like when he hires Thack’s opium dealer Wu to murder the gangsters who punched him in the dick. Other major doctors include young upcomer Bertie (Michael Angarano of Red State) whose dad wants him to work someplace nicer with a better salary, and pissy Everett (Eric Johnson, Flash Gordon in 2007) who was supposed to get the position that Edwards holds.

And the others… Dr. Christiansen (Matt Frewer: Max Headroom, Trashcan Man in The Stand) was Thack’s mentor, kills himself in the first episode after the failure of an operation that the others later perfect. Tom Cleary (Chris Sullivan of Guardians of the Galaxy 2) is an ambulance driver who steals other hospitals’ patients and starts an underground business with abortionist nun Sister Harriet (Cara Seymour, abused Aunt Linda in Jack & Diane). Everett’s wife Eleanor (Zoe’s sister Maya Kazan, who would play a character named Zoe on Sleepy Hollow) loses her baby, kills the adopted replacement baby, then is sent to the booby hatch where they pull all her teeth. Dr. Zinberg (Michael Nathanson of TV’s The Punisher) is the Jewish doctor who Thack feels is his greatest rival. And Bunky (Danny Hoch of We Own the Night) was the lead gangster/loanshark/pimp killed by foot fetishist Wu (Perry Yung of John Wick 2). John Hodgman does not appear, despite a bunch of people kinda looking like John Hodgman. 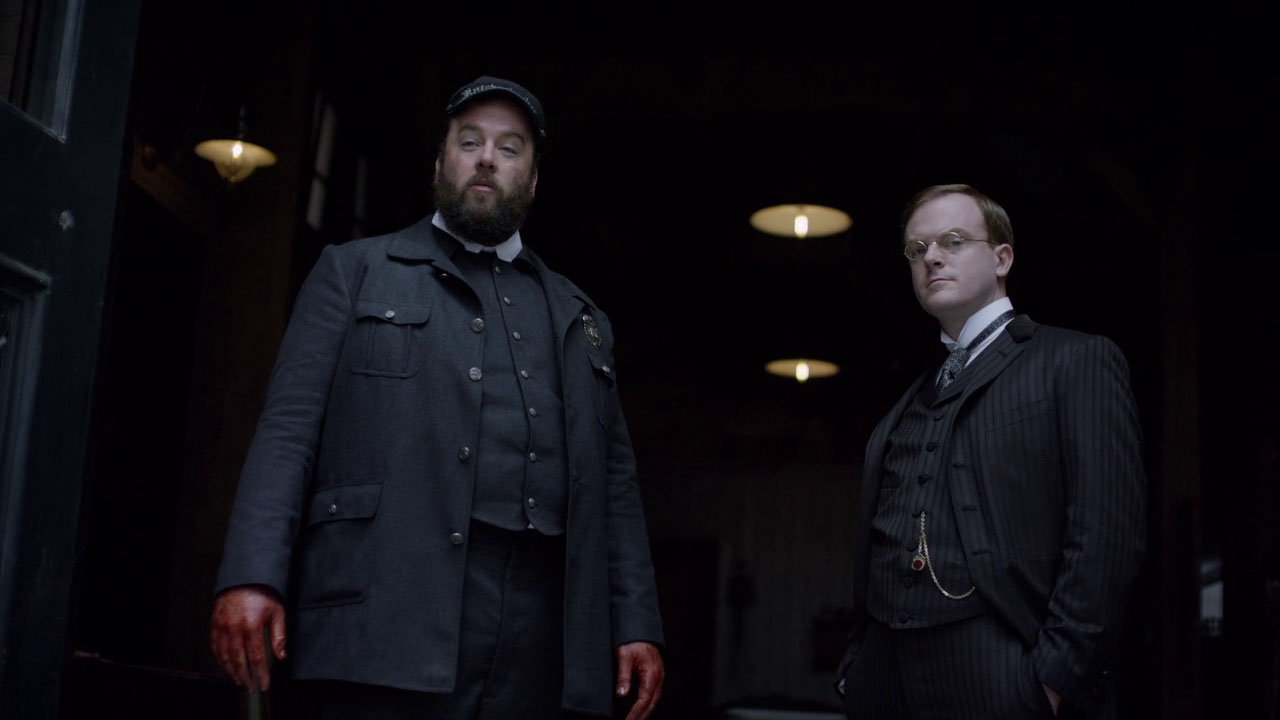 Bad Medicine: a pregnant woman is told to stick her belly in ice water. A nurse dies putting out an electrical fire with a bucket of water. Barrow puts his head in an x-ray machine for an hour. Thack’s ex Abby loses her nose to syphilis and gets her arm and nose grafted together. Holes are drilled in peoples’ heads, limbs are lost, things are burned and severed and pulled, and towards the end it’s all done without anesthesia because war in the Philippines has caused a cocaine shortage, causing Thack to go increasingly mental from withdrawal and kill a kid with a bad blood transfusion after misunderstanding how blood types work.

The stinger ending is the hospital shareholders vote to move uptown and Thack is given a new drug called heroin to cure his coke addiction.

The lighting is often quite nice: 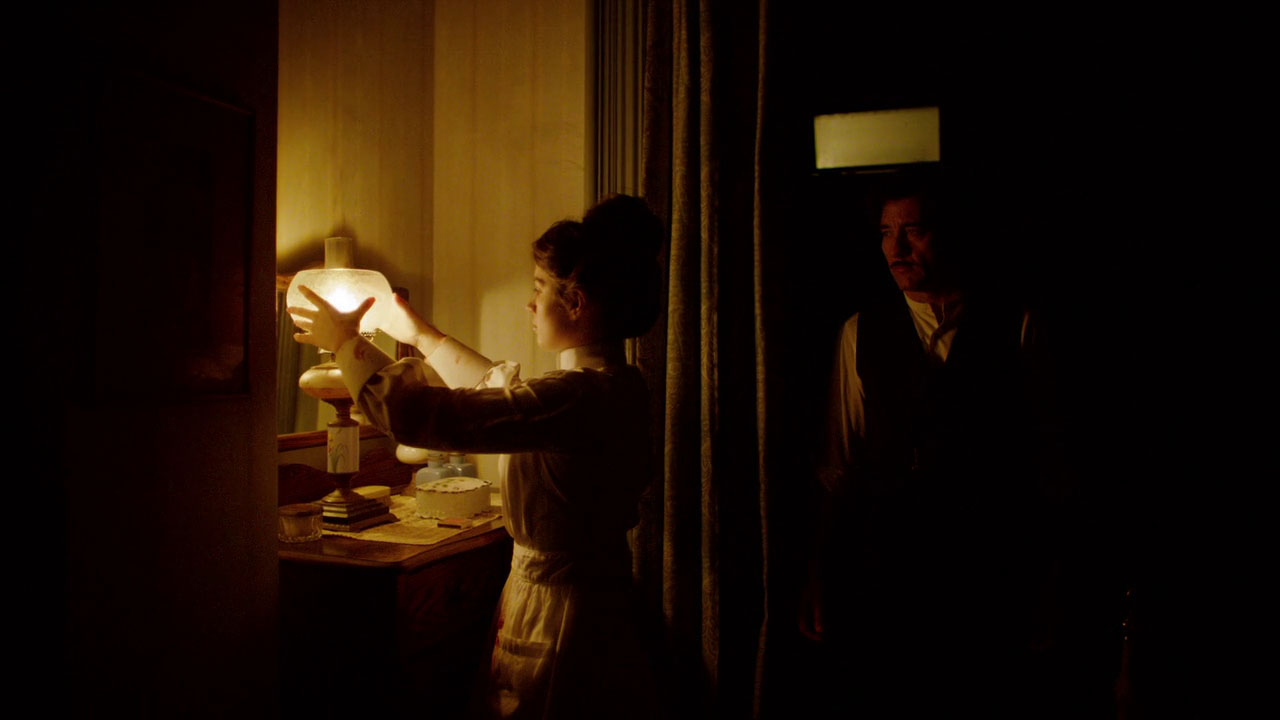 To make sure I don’t watch season 2, I’m spoiling it on wikipedia… looks like the abortionist nun goes to jail and Cleary blackmails their former clients into bailing her out. Bertie goes to work for Dr. Zinberg then quits after killing his own mom during cancer surgery. The guys start a prostitute clinic, discover radiation therapy, learn how to cure syphillis, and separate conjoined twins. Thack studies addiction, trying lobotomy and hypnotism. Everett becomes a eugenicist, decides to sterilize the poor, and sabotages Edwards’ surgeries. Edwards’ secret wife arrives, and he considers black nationalism. Abby dies during nose surgery. Barrow kicks out his wife, who then blackmails him over the money he’s stolen from the hospital. Nurse Elkins murders her abusive preacher father. Cornelia’s rich dad dies saving her from a fire set by her brother. And Thack performs surgery on himself, passes out, and the show was mercifully cancelled before his fate was revealed.

Animated cop-show parody starring a drunken, mumbling ass with legs who often shoots innocent civilians while failing to solve silly crimes. Not a good show, but the whole season is only an hour so I let it keep running. Larry Murphy (Teddy in Bob’s Burgers) does most of the voices, including Assy, his partner Sanchez, and his angry supervisor. The creators have cred: Carl Adams wrote for Dr. Katz and Matt Harrigan for Space Ghost C2C. Director David SanAngelo worked on Home Movies and WordGirl. 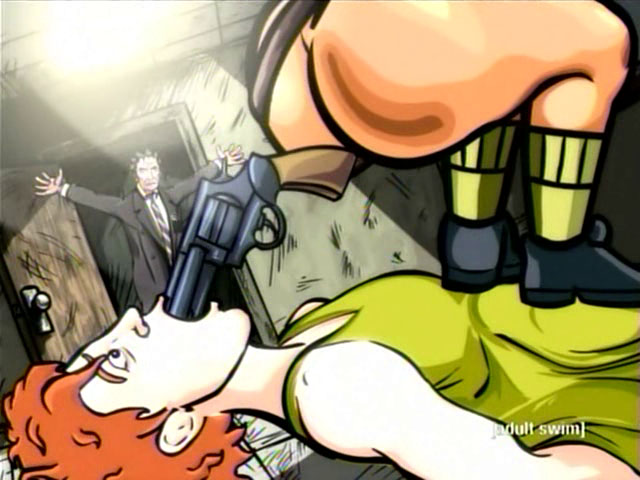 Maybe the most consistently funny show about depression. BoJack gets everything he wants in this season – a perfect girlfriend who’s never seen his TV show, the leading role in his dream film, renewed friendship with his first girlfriend, and a big-ass boat – and throws it all away because he’s a self-destructive prick. Meanwhile, Princess Carolyn starts a new agency with a coworker/lover, Diane falls into a funk and hides at BoJack’s house for months, Mr. Peanutbutter hosts a hit game show produced by JD Salinger, and Todd joins an improv-comedy cult.

I didn’t watch most of season 1, but after hearing about its ending (it was the Bad Place all along and the entire neighborhood is Ted Danson’s torture experiment, which is why there are so many frozen yogurt stores), I joined Katy for this one, which was terrific, opening with hundreds of “reboots” of the experiment, until a desperate Danson confesses and enlists the others to play along so they all don’t get sent to the real Bad Place. Also: Chidi teaches ethics classes, Janet becomes more powerful and erratic and creates a boyfriend named Derek, they sneak into Bad Place HQ and ask mercy from a goofball Judge, then are sent back to Earth for further study.

“Paycheck stole Patsy Cline’s car!” I only heard about this from a Robbie Fulks post, am assuming it mostly flew under the radar. Good-natured stories of the highs and (mostly) lows on tour with some country legends, with generous song clips balancing out the bad behavior, animated and rotoed by Mike Judge, who clearly loves this stuff. Will be interesting to see if the new Blaze Foley movie can stand up to his episode here, and how the less country-focused second season will go.

Tammy and the President: 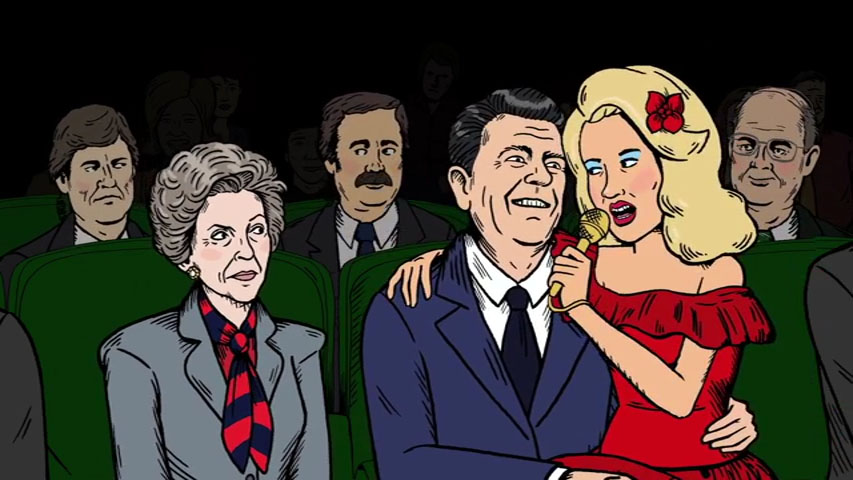 Bookended by double episodes with Dev’s almost-girlfriend Francesca, first in Italy then New York, the middle half has Dev hosting a cupcake show. More movie references than ever, a couple standalone/gimmick episodes, some good flashbacks in a Denise-focused episode (with Angela Bassett as her mom) and lots and lots of food.

This belongs in the pantheon of absurd sketch shows, with Mr. Show and Kids in the Hall and Human Giant and Chappelle’s Show. Created by the writers of Father Ted… so maybe that show is good? The three guys from season 1 are now joined by The Dark Haired Woman (Rebecca Front of The Day Today, The Thick of It season 3) and The Woman With The Bouncy Curls (Tracy-Ann Oberman of EastEnders). 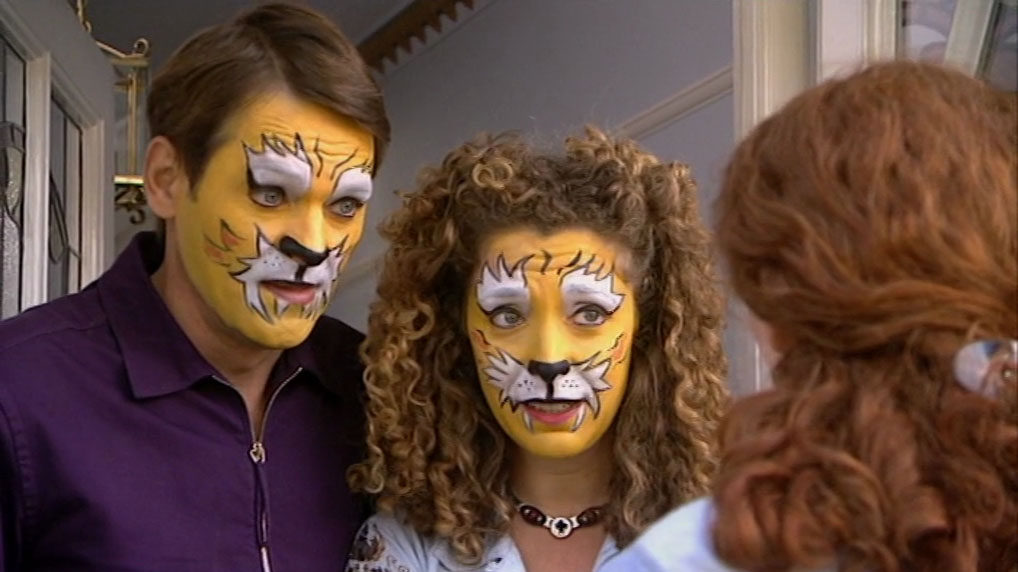 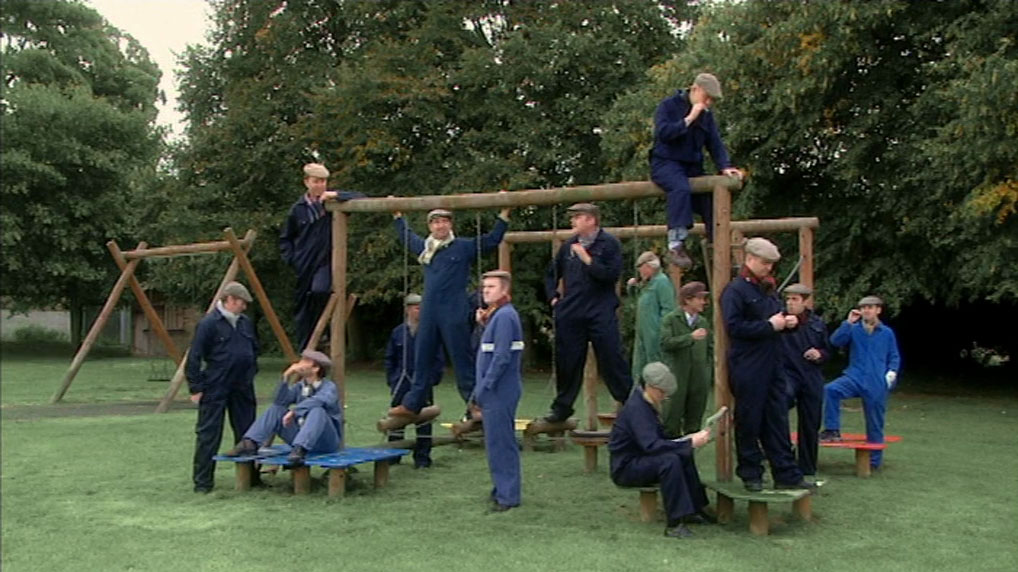 –
And we watched enough of the Great British Bake Off to last a lifetime – though I’m slightly curious to check out the Boosh-hosted season. Also watched a Todd Barry standup special, the Fred Armisen one about drumming, and probably a few others I’ve forgotten. With limited TV time we still haven’t finished The Deuce or the new Mystery Science Theater 3000, gotten back to Atlanta or Blackish or Steven Universe, or started the latest seasons of Kimmy Schmidt or Search Party or Black Mirror [edit: one of these things is no longer true – stay tuned for details in Season 45].