Ah, I was right when I watched Scars of the Sun and assumed that it wasn’t Miike’s primary focus of 2006. This movie (AKA 4.6 Billion Years of Love) is where all the innovation went. After all, the man himself called this his masterpiece.

Opens with a clapboard, a guy reading poetry about light and the past and the five senses, an older fellow telling a kid about homoerotic rites of manhood, then suddenly Masanobu Ando is doing a frenetic dance against a white background. Later there are intertitles, crazy sets, unusual CGI, and an animated segment of someone frying on the electric fence. 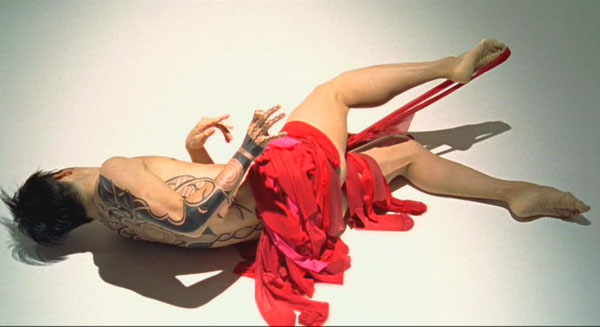 Once you unlock the story from all the craziness, it’s about two guys sent to prison together – tattooed tough-guy Kazuki (Ando) and weak, sensitive, gay Ariyoshi. K likes A and looks after him, but doesn’t quite warm to his sexual affections. Both are frustrated, yearning for escape (symbolized by their long conversation in an imaginary outdoor field in front of a pyramid and a space shuttle).

Ryuhei Matsuda (Ariyoshi) is the guy on the poster of Oshima’s Gohatto and the star of Nightmare Detective: 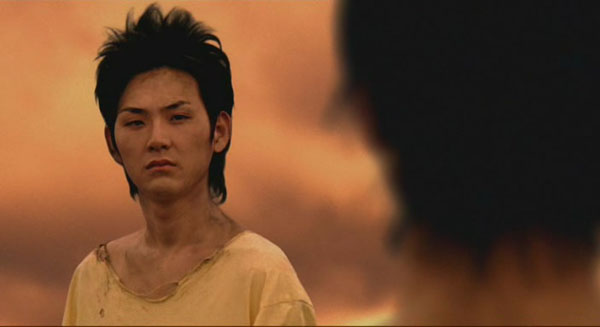 At the end it turns into a whodunit, as Ariyoshi is suspected of strangling Kazuki to death. He’s caught in the act, and tells everyone he did it but nobody believes him capable so the investigation continues. 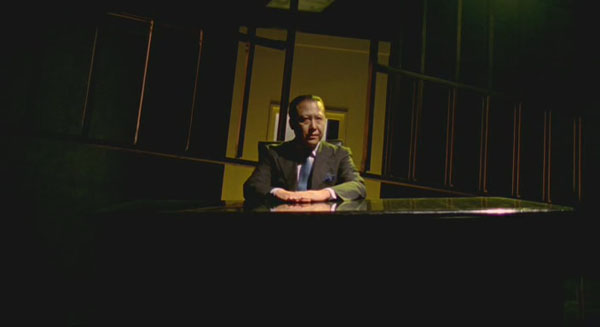 But it’s not the kind of whodunit where the audience participates and could possibly guess the culprit. We’re just left to wonder “Did Ariyoshi kill him, and how?” because the other inmates don’t get much to say until after the investigation is underway. I figured Kazuki could’ve let A. kill him, a la In the Realm of the Senses, but no – it was giant Tsuchiya who works in the infirmary and regularly summons A.’s co-worker from laundry duty for sexual liasons. Even Tsuchiya didn’t think he could take Kazuki – he attacked him as a way to commit suicide, and when K. let himself die, T. took his own life a couple days (hours?) later. 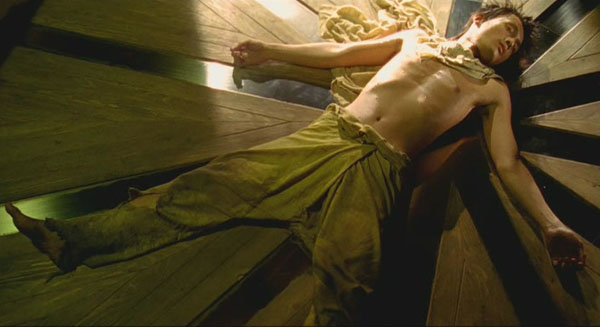 Sounds like kind of a sad story, but the filmmaking is so invigorating there’s no time to be bummed out.

For a film whose premise is a homoerotic romance set in a prison, Miike has studiously avoided the obvious, the cheap, and the cliché. The prison itself is not so much a set as an abstraction—the architect appears to have run out of ink and paper before he got around to designing the usual attributes of a prison: cells, bars, walls. 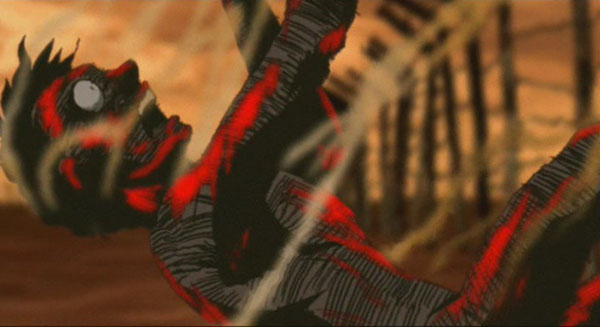 There is a lot of meditation in Big Bang Love, Juvenile A too. It’s perhaps one of Miike’s most meditative films ever. Oddly, on the one hand, because it was produced by Hisao Maki, responsible for Silver, Family and several other of the most thick-headed turkeys in Miike’s career. Not so oddly, on the other, because it was scripted by the great Masa Nakamura, writer of Dead or Alive 2, The Bird People in China, Young Thugs: Nostalgia and several other of the very finest films in that same career. The big bang of the title is also the clash between the two furthest extremes in Miike’s filmography and the spectacle of its scattering stardust is one to behold.

Yes, but is it any good? This is a Takashi Miike film. It will make you wonder, curse, marvel, tremble, scratch your head, grow bored, and awaken rudely. Celebrate it.