“Help me. Rats are eating me.”

Rose (not shown here because I didn’t think to get screenshots until after she’d died) lives in a spooky “New York” apartment building above a rare book store run by cat-hater Kazanian. She reads his book about The Three Mothers (which is not such a rare book since he has a few copies in stock). Bumbles around the basement, drops her keys into an underwater room with a portrait of a Mother and some floaty dead bodies, then recovers from that only to be stabbed in the neck.

Kazanian hating on some cats: 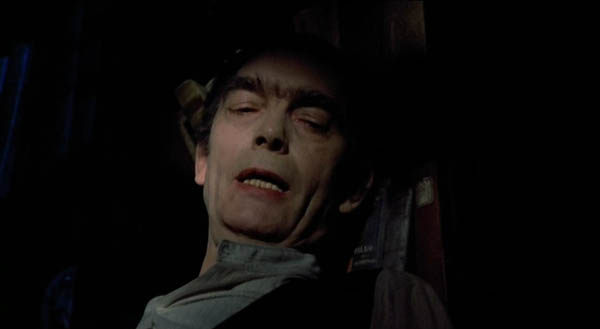 How to die in this movie, in three steps:
1. a hand injury
2. (optional) animal attack
3. stabbed in the neck

Rose’s mustachioed brother Mark is in Rome studying music with his buddy Sara, when he gets a mysterious letter from Rose referencing the Three Mothers book. 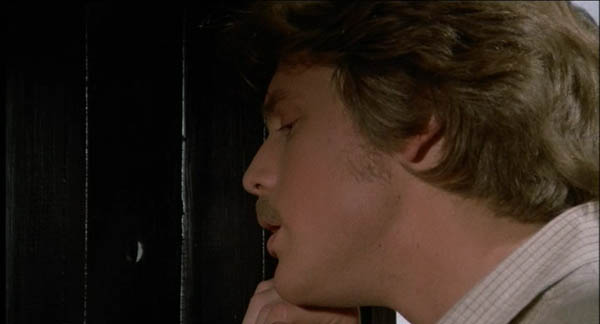 Mark runs off, freaked out by a cat lady who appears in class, so snooping Sara reads the letter. 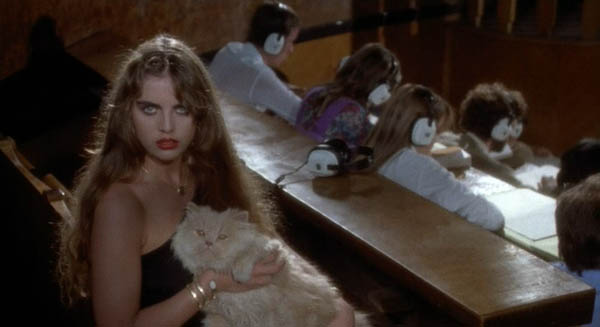 Sara picks up a copy of the not-at-all-rare book in Rome, and stumbles immediately upon another of the three evil buildings that the book mentions. She runs away from an evil alchemist and befriends a man in the elevator who soon gets stabbed in the neck. 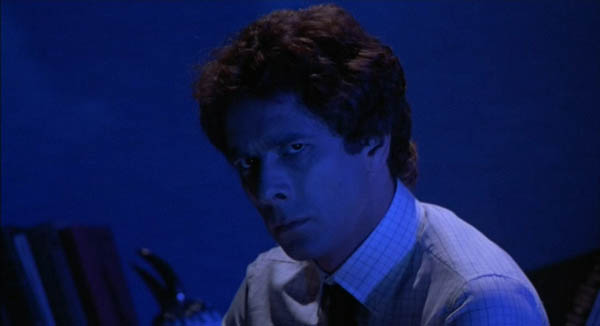 A monster catches Sara and dispatches her with a broken window to the neck. I am not kidding.

Snooping Sara shortly before getting her stupid self stabbed: 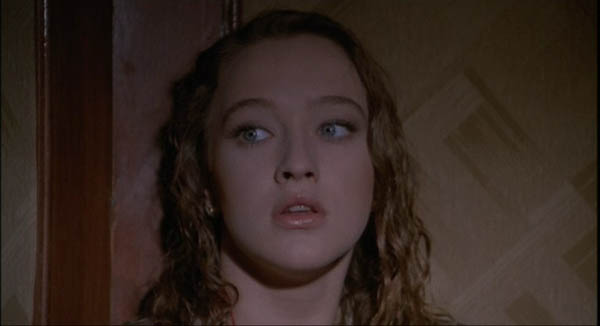 Mark goes to “New York” to find his sister, meets her hot neighbor Elise. Elise helps get him caught up on the mystery, then she gets tormented by having stagehands throw cats at her from off-camera, and stabbed to death.

Elise on the set of INFERNO:

Also in the apartment are an evil nurse who wheels around an evil old man, a nondescript woman (not shown), and a loyal butler.

Mark hassles poor Kazanian, who is later tormented by cats in his bookstore. Kazanian loads the cats into a bag, takes it to the river to drown them, falls down and is nibbled by rats before being stabbed in the neck. His own fault, really.

Back at the mysterious apartment building, the butler is probably evil (aren’t they always?) but I don’t remember for sure… anyway, his eyes are gouged out, breaking the knife-to-the-neck rule set forth by INFERNO in order to keep the “an eye must always be gouged out” general law of Italian horror.

Butler near a birdcage: 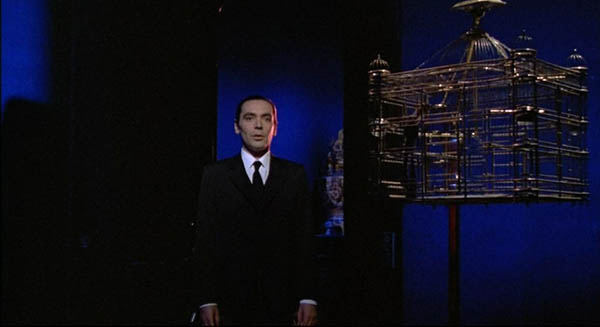 If the butler isn’t the mastermind behind all this evil, it must be the old man, who lives like Phantom of the Paradise in the cellar with his listening devices and his robot microphone. 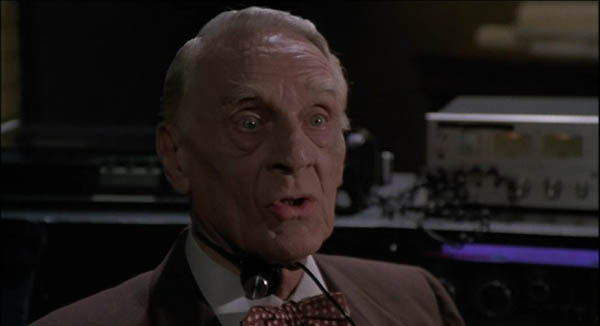 Wrong again! It’s the nurse who wheels him about! I think the movie is saying that she’s one of the Three Mothers and that she is very evil, but I’m not sure how far her evil extends, or if it’s even dangerous to people who don’t live in this apartment or attend music class or hate cats. But oh my god, when Mark goes downstairs to face her, the movie’s theme song plays with lyrics sung in Latin, and that is great.

The nondescript woman sets the place accidentally on fire (it’s an “inferno”, if you will), and the Mother is either delighted or horrified by this, hard to tell since at this point she is wearing a rubber skeleton mask, but anyway she throws her hands in the air and Mustache Mark escapes, the end.

My favorite part of the whole affair is the interview on the DVD, where a weary-looking Argento talks about what a difficult and personal film this was, and how he and assistant director Lamberto Bava (dir. DEMONS and DEVIL FISH) and his father Mario Bava (dir. Black Sunday and Diabolik) struggled over this effects shot where a woman dramatically crashes through a mirror and comes out wearing a fakey skeleton costume. Yep, it took the three greatest minds of Italian horror to come up with that one. If only they could’ve got Lucio Fulci (Zombi 2, The Beyond) and Umberto Lenzi (Cannibal Ferox) to make her a better rubber suit.

The underwater bit isn’t bad, which is the same thing I said about Zombi 2. Maybe the Italians should make a whole horror movie underwater.

At least I was so busy marvelling at the silliness of the whole thing that I didn’t notice the dubbing.

Implications of this movie:
– women (or maybe actors in general) are just set dressings to be put in pretty poses and then threatened and stabbed.
– there is something evil, and it’s been around forever, and it is easily defeated by unknowing incompetents, though honestly it’s better off being left alone since it’s not much of a threat to anyone.
– alchemists are scary, cats are evil, architecture is evil

I think Eyes Wide Shut was based on this movie. The atmosphere and pacing, the camera zooms, the drowsily agitated characters, the fake New York, the singing in Latin… it all adds up.

Total Film mag and the They Shoot Pictures List call this one of the best horror movies of the ’80’s, but those people are tripping.

This is a semi-sequel to Suspiria, and Dario Argento’s brand new film Mother of Tears is a sequel to this one starring his daughter Asia (as a woman in trouble) and Udo Kier. Mustache Mark never amounted to much… Rose appeared in Puppet Master and Watchers II… Sara was in something with Marcello Mastroianni and Tom Berenger… Elise has been in all the big Italian horrors and will appear in Mother of Tears… the nurse was in The Beyond… Sara’s blue-tinted friend dubbed the title character in the Italian release of V For Vendetta… the old wheelchair man appeared in The Seventh Victim in 1943… and Kazanian was the husband in Last Year at Marienbad!