First rented this in December 2005, took over two years to finish it. Only movie to top that is The Decalogue (begun in 2001, still unfinished).

Katy didn’t want to watch it, and I’ve got trouble with it myself, not having any experience with opera. Some of the songs (“all in vain”) are lovely, though. The acting is extremely stagy, with huge facial expressions and body movements. Hoffmann himself moves stiffly through the film, maybe the only non-dancer in the cast but with a great voice (if he’s not dubbed). Sumptuous set design and costumes, one large room at a time with not much that is apparently cinematic about it. Even some of the effects (scattered, living doll parts created by actors wearing mostly black) are stagy. But then it can explode into incredible matte-painting sets with killer editing tricks and one very memorable camera-trick perspective shot involving a staircase shot from overhead. Camera is mostly still during dialogue/singing scenes, with some well-parceled sweeping movements… all fits together amazingly. Some of the richest color I’ve seen on my little television and laptop screens. They make great use of height in the frame, all columns and high-ceiling rooms. Since the dance numbers are mostly one or two people at a time, you never wish for widescreen. Only thing that really needs to be said is that it has more amazing bowl-me-over visual moments than almost anything else I’ve ever seen. Need to watch again as many times as possible.

Hoffmann is at the ballet falling for the dancer, whom his rival is also lusting over. He and his friends abandon the show for a bar where Hoff narrates three stories, starring himself, his rival, and Hoff’s nearly silent male companion (played by a female redhead), about three thwarted romances. At the end, the girls all dance together and collapse back into the original girl. And as Hoff falls exhausted to the bar table at the end of his story, the dancer shows up only to be escorted away by the rival. 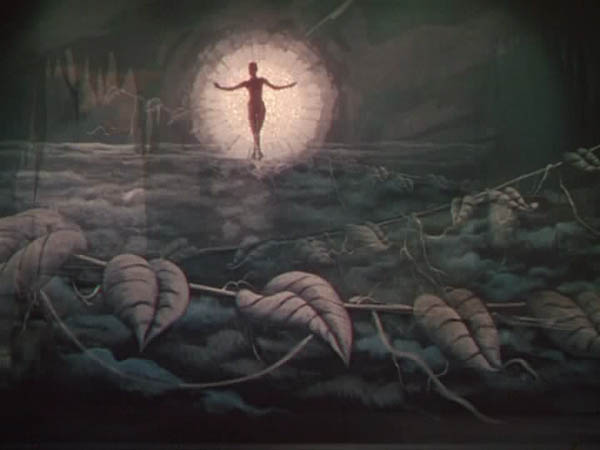 The main dancer and the doll in the first story were Moira Shearer from The Red Shoes. The second girl with a jewelry obsession was Ludmilla Tcherina. Third girl, sickly with a dead mother, was Anne Ayars. All are stage dancers best known for this and other Powell films.

Hoffmann was a big opera star, also appeared in Carousel. Rival Robert Helpmann (probably the most facially expressive here) has played sinister characters in a few films. The most prolific was Pamela Brown, Hoff’s silent companion, who had fourth-billed roles in Cleopatra, Lust For Life, Olivier’s Richard III and Powell/Pressburger’s I Know Where I’m Going, which is the next one I’ve gotta see. 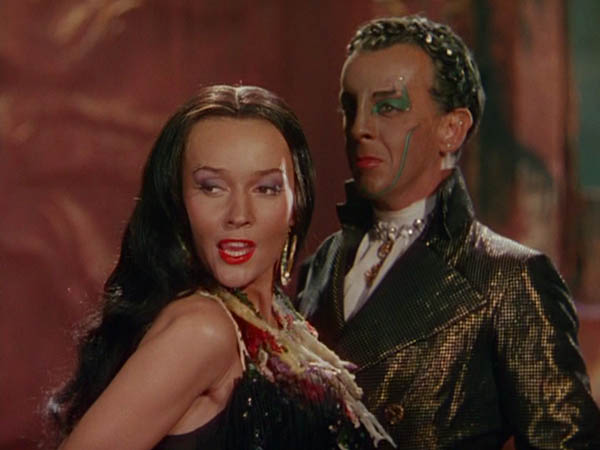 Also watched a 1956 widescreen Powell solo short of The Sorcerer’s Apprentice with some of the same art crew as Hoffmann. It was an early showoff reel for CinemaScope, only now available in a shortened far-from-pristine print. The voiceover stands out awkwardly, but the costumes and dancing are great – the living broom and dancers representing the water that fills the room. Cool little film. IMDB says the apprentice, Bulgarian born, was the second woman to ever be knighted in Norway.