Congoma-player Marigo hasn’t paid the rent in a few months, so his landlady (the griot from Touki Bouki) has confiscated his instrument until he pays up.

With no way to earn a living, Marigo buys a lotto ticket from an optimistic dwarf acquaintance. 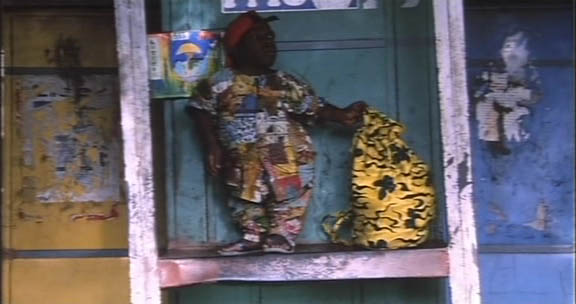 Marigo has got the winning number… but he pasted the ticket to his front door behind a poster of Yadikoon (“an African robin hood”), so he has to take the whole door to the lottery office.

…along the way, dreaming of the rich life… 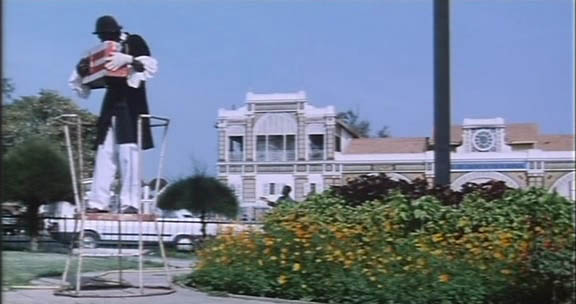 …only to be told that the ticket needs to be detached from the door to be authorized. 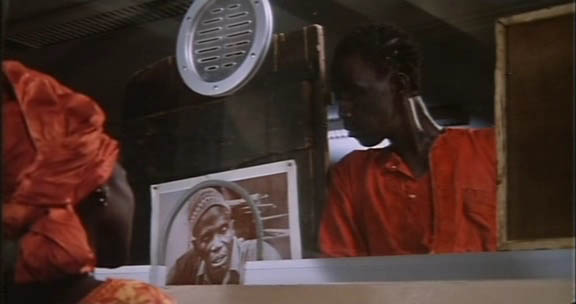 So Marigo makes a run for the beach and uses the pounding surf to remove the ticket, dancing and dreaming on the rocks, losing his poster but getting the ticket off successfully, screaming ecstatic laughter. 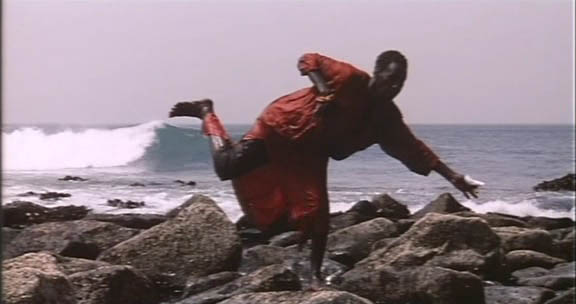 I pretty much loved it.

Culturebase.net:
“We have sold our souls cheaply!“, Mambety concludes, though he never described himself as a political director. Yet his films always refer to the economic reality of his country, which is entirely dependent on the World Bank, monetary funds and French economic policy. This is true for his last two films. They were part of a trilogy on “The story of small people.” “Le Franc” and “La petite vendeuse de soleil” are from parables on the lives of people who must ask themselves the same question every morning, namely how to gather the most fundamentally necessary means to survive. The small people in this trilogy are the counterparts to the greed of the hyenas in his longer feature films.”

Filmref.com:
“Mambéty introduces the trenchant idea that the power of the imagination to raise post-colonial African consciousness does not exist in fanciful, but ultimately empty, idle dreams or wistfully dwelling over a lost – and stolen – noble past (a theme that is also articulated in Jean-Marie Téno’s films, as well as Ousmane Sembene’s Borom Sarret), but in a certain wide-eyed innocence and naïve determination that recovery and advancement are still possible with dedicated effort.”

California Newsreel:
“In both films there are conspicuous references to Yadikoon, a semi-legendary figure who in popular memory became a kind of Senegalese Robin Hood, robbing from the rich to give to the poor. In Le Franc, the main character, Marigo has a poster of Yadikoon in his room. Mambety himself named a foundation he established for Dakar’s street children after Yadikoon.”

The only hits I get from “Yadikoon” on google are from articles on these films, so either he’s a Mambety-created character or we are all spelling his name wrong. 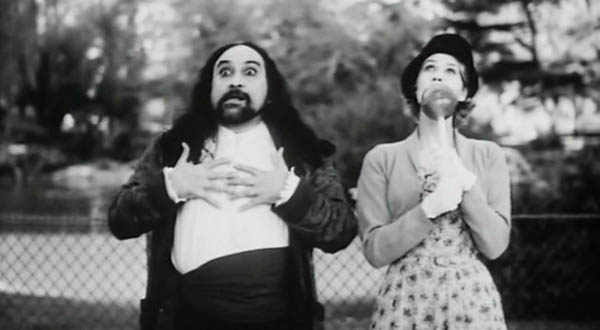