Sodie’s fifteenth film of the 2000’s. I like a filmmaker who can be good and productive, and there aren’t many of those left. And this was good for sure. Steven and the actors and production designers and music composer Marvin Hamlisch all seem to be having a good time, turning a low-key piece of mid-90’s corporate intrigue into a light comedy – the comedy being provided by Matt Damon’s character Mark Whitacre, his odd behavior and agent Scott Bakula’s incredulous reactions, as set forth in the trailer. We never do meet the “real” Mark, figure out exactly what’s going on in his mind – I suppose that’s because of the non-involvement of the real Mark, now out of jail and president of a biotech firm. The filmmakers taunt us by offering a voiceover of Mark’s thoughts, but only the most irrelevant non-sequitur thoughts.

Damon with wife Melanie Lynskey, who played one of George Clooney’s sisters in Up in the Air – and I didn’t realize she also starred in Heavenly Creatures:

The payoff is when the movie strays from the light tone at the very end. Whitacre is prosecuted for embezzling and lying to the feds, and ends up serving far more time in prison than the executives he had been working to successfully convict. The sleight-of-hand here at the end makes the movie more interesting than the straightforward hero story of Erin Brockovich (or Flash of Genius, I’m guessing). The supporting cast is peppered with comedians (Scott Adsit, Patton Oswalt, Dick Smothers, the little lovesick poet from Waitress) – strange, since there doesn’t seem to be any improv and no one gets to be funny except for Damon.

To hit a target as broad as a barn – American corporate atmosphere – Soderbergh and screenwriter Scott Z. Burns (who adapts Kurt Eichenwald’s book) narrow the subject as much as possible, getting just so the exacting blandness of 1990s corporate culture. … But a brief picture of The Informant!’s genre parody does little justice to the closet character study that emerges from Damon’s performance and the story’s deadpan plot twists. The crackling humor of the film—which comes from a myriad of sources—then builds off the inane, if not legitimately surreal impossibility that someone so high up and so well off would ever dare expose the horrible mechanisms behind their success and others’ suffering.

Good to see Scott Bakula, even if he’s under some very silly hair: 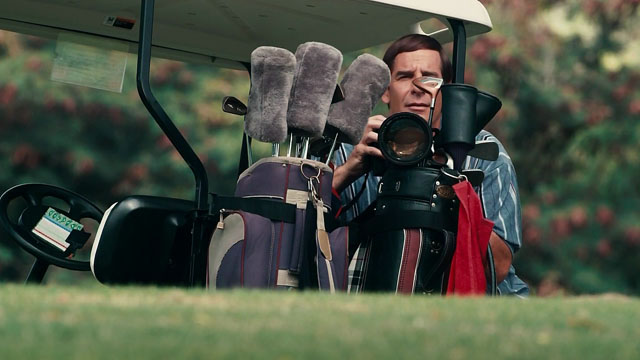