“My films are the expression of a desire for a better world,” Haneke says. In the same interview, he says he regrets once having called this the “glaciation trilogy” because he wants it to be more complex and not so easily labeled.

Old man living alone having trouble communicating with family. Student into ping pong and gambling. Runaway immigrant kid adopted by local family. News reports on global wars and celebrity scandal. A shooting at a bank. Punctuated by sudden silence and black between scenes.

A clear predecessor to Code Unknown, but where I didn’t get C.U. at all, this one at least makes sense. Kind of your Amores Perros cross-sections of people united by an incident of violence, but of course far less obviously scripted. Not a causes-and-effects-of-violence sort of thing. The Haneke quote above makes perfect sense. He’s showing a bunch of familiar events, saying “what is wrong with this picture” and daring us to connect the dots. One of the most immediately easy to understand of his films, but still hard to watch.

Well, I don’t know about that, “hard to watch”. With the long static shots and the lack of narrative structure, I think of them as hard to watch. But then, I compulvisely rent them, and I’d watch Time of the Wolf or Cache again right now or anytime. Not unenjoyable, but not exactly a magic-carpet-ride of entertainment. Need to come up with a new term to describe these. How do you recommend a Haneke movie to someone? Obviously I’m not alone, since the thursday afternoon show of Cache was sold-out in new york, and the video releases have been flying off the shelf here for a month now… he’s a popular guy. 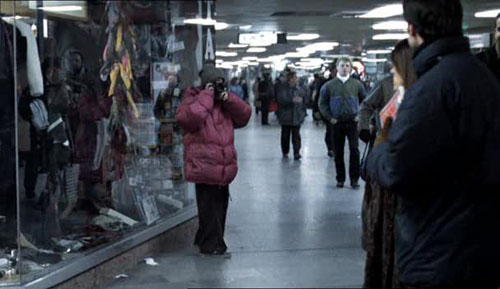