A true “late film,” Cold Lazarus was the final script completed by Dennis Potter just weeks before his (and his wife’s!) death from cancer. He wrote it after his diagnosis as a companion piece to Karaoke, which he didn’t feel should stand alone as his final work. I watched Karaoke a year before starting this memory-enhancing blog, and so don’t remember it perfectly, but enough to get the connections between the two stories.

Potter on Potter:
“You don’t mind the frozen head in itself so much as you care about the stories it’s telling.” 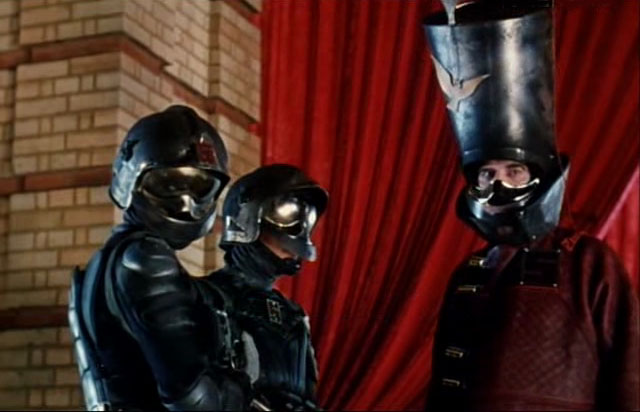 Set in the year 2300, a lab run by Prof. Emma Polack (Frances de la Tour of Rising Damp, suddenly in a bunch of mega-budget Hollywood movies) has got the frozen head of Albert Finney’s character from Karaoke hooked up to machines and chemicals, with which the lab rats can visualize his memories. Unfortunately for them, Finney was a creative type whose thoughts don’t always reflect events as they actually occurred – a fun premise which I wish had been given more time. Had Potter lived long enough to workshop the script with actors/readers, assuming he ever did that sort of thing, he may have realized how much time was spent instead on typically tedious sci-fi blather, characters rattling off endless serial numbers (because in The Future, numbers replace names for everything) and silly futuristic words (the scientists didn’t go to college, but “cyber-college”). He also may have noticed how clueless these supposedly brilliant scientists seem when they ponder aloud the nature of subjective memory. I don’t mean to be hard on the guy, though – it’s an interesting story, and he was under the strictest writing deadline: to finish the story before his imminent death. 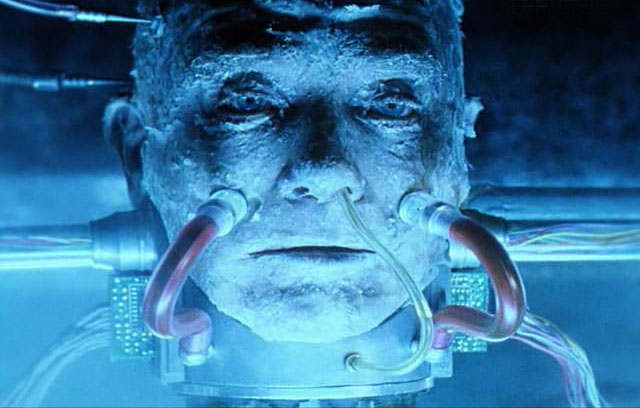 Frances de la Tour and Ganiat Kasumu, whose hilarious hairstyle you can’t make out properly from this screenshot: 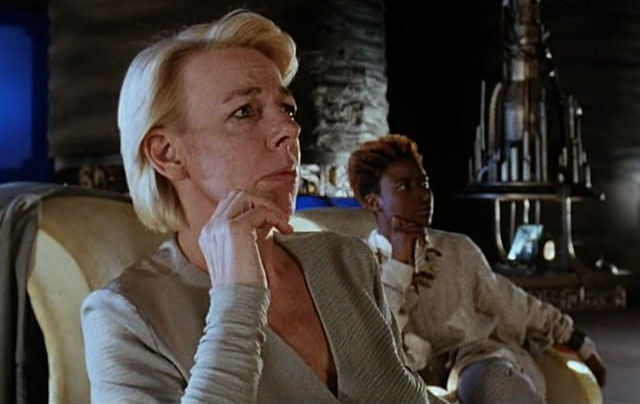 So, Emma runs the lab along with shady Fyodor (Ciaran Hinds, a henchman in The Cook, The Thief, etc, and FBI in Miami Vice), straight-laced Tony (Grant Masters, whose previous claim to fame had been “man in laundry room” in a Mr. Bean episode), Luanda (Ganiat Kasumu of Nigeria), Kaya (Claudia “no relation” Malkovich) and Blinda (Carmen Ejogo, Maya Rudolph’s sister in Away We Go). They’re all under severe budget restrictions from artifically-young Cruella DeVillianous lab owner Martina (Diane Ladd: Laura Dern’s lipstick-smeared obsessive mother in Wild at Heart). But Martina’s buddy/rival Dave (Henry Goodman of Taking Woodstock), a benevolent television mogul, finds out about the lab’s research with the aid of Martina’s VR helmet (remember VR?) and his own network of robotic-bird spies, and secretly offers to buy them out, offering them an unlimited budget in exchange for the rights to broadcast Finney’s memories. 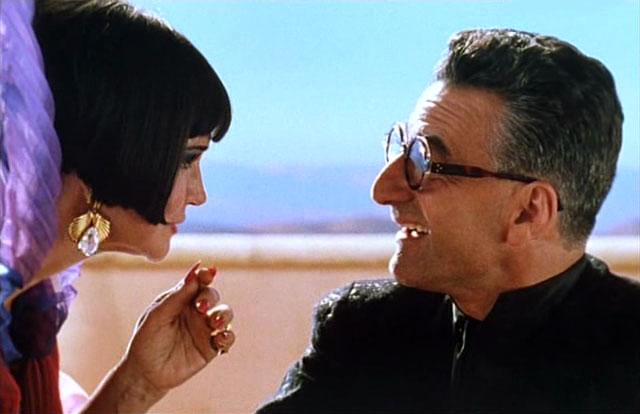 Intrigue: Fyodor is secretly an agent of the underground RON (“Reality or Nothing”) organization, and when Kaya exhibits enough human compassion that he thinks she might be turned to their cause, he introduces her to a RON-affiliated coworker, to disastrous results. Blinda is found to be a spy for the owner, so Fyodor takes her out in the movie’s most Army of Shadows-worthy scene. And new boss Dave’s supposed benevolence turns quite unsurprisingly evil. The movie’s most interesting unanswered question is what will happen when Finney’s conscience is broadcast into every home. Dave is counting on an unprecedented ratings bonanza, people passively consuming a man’s psyche as entertainment, but Fyodor hopes that glimpses into a less-authoritarian past will make people realize their own lack of freedom and rise up, inspired by the RON slogan. Potter preferred not to allow us an answer, as Fyodor shoots first Dave then the head (which somehow provokes a lab-consuming, Fyodor-vaporizing explosion).

Ciaran Hinds, about to shoot either Goodman or Finney:

Of course since it’s Potter, there’s also rape and depression, torture and nihilism, and Finney sings Pennies From Heaven (probably a scene from Karaoke). Funny how his “memories” are edited rather to the rhythm of a 1990’s British TV miniseries, heh. The perverted sex-scientist whom Dave places on the team in the second half and Martina’s series of scantily-clad poolboys were a fun touch.

In the doc Dennis Potter: A Life in Television, someone says at least Potter was never boring – which is true of this. It’s not his very best writing (I’d even prefer the hardly-ever-discussed Lipstick On Your Collar) but it’s never boring. It’s a classy production too, with CGI effects that seem very good for mid-90’s television. The John Williamsy music is a bit loud, and the actors are more than a bit loud, everyone seeming drunkenly overenthusiastic.

Finney appears full-grown in his own childhood memories, an approach used before by Potter in Blue Remembered Hills: 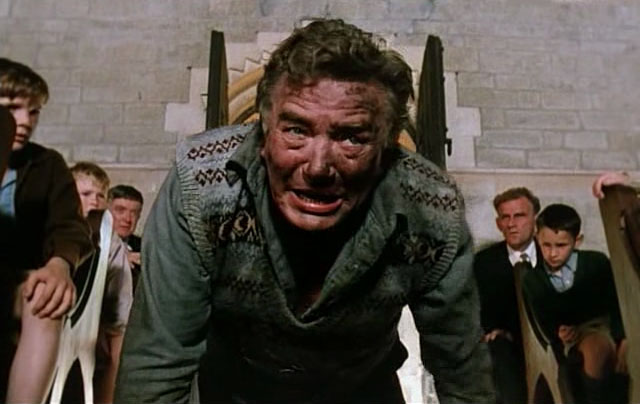 Director Renny Rye (who also made Karaoke, Midnight Movie, Lipstick On Your Collar) was hand-picked by Potter for having no personality. Rye:

One of the reasons about Dennis wanting me to do it, was that he had this anxiety about directors wanting to impose their own stamp to such a degree that the writer’s original voice is masked or overcoloured. That distancing is one of the things he was dramatising. … Dennis loved the conceit of this group of scientists exploiting a writer’s brain after his death. ‘That’s what you’re going to be doing in a year’s time,’ he said: ‘exploiting my work.’