Vincent Gallo was amazing in this, won an acting award in Venice. He plays a soldier captured by U.S. forces after blowing up three guys with a rocket launcher – at least that’s what I thought. A couple things I read online suggest that he lifted the launcher off another soldier in the cave, or found it there when he was just stumbling by, but that wasn’t how it looked to me. Anyway, he kills enough people over the course of the movie – and is antagonized and tortured enough – that it’s clear (even from the title) that the movie isn’t making him out to be evil nor especially sympathetic. He is trying to stay alive in the midst of social and military conflict. He doesn’t manage, but not for lack of trying. The movie’s many action scenes are tense and powerful, the images are often poetic, and with Gallo’s great performance on top of that, this has become one of my favorite recent films. 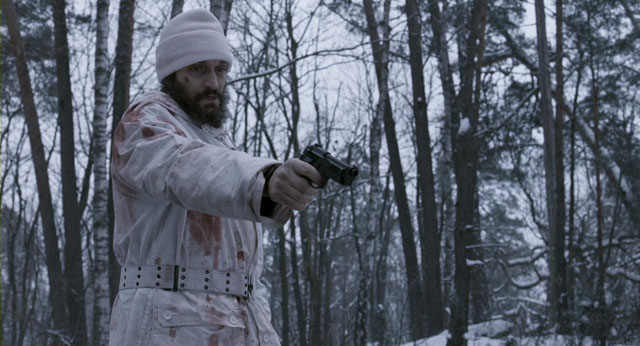 After the initial attack, Gallo is pursued by helicopters and deafened by a rocket strike. He’s interrogated and waterboarded, then escapes when a prisoner transport truck tumbles off-road in what turns out to be Poland. He tries to surrender and make himself known to his captors, but sees a chance and kills a couple of guys instead, escaping into the wilderness – later pursued by dogs and falling into a river to escape. Now he’s in the snow on unfamiliar ground, eating insects and berries to survive, starving, having delusions. He hitches a ride on a logging truck and kills a logger, then in the movie’s weirdest scene, assaults a nursing mother to get milk. He ends up at a sympathetic mute woman’s house (Emmanuelle Seigner of The Ninth Gate and Bitter Moon), for one night of rest and recovery. But by now he’s mortally wounded, escapes on a white horse but doesn’t last long.

As a filmmaker with a puzzling half-century of peculiar projects and long silences and catholic passions behind him, Skolimowski has always been a marginal figure, erratically appearing and helming films so disparate he’s a living disputation to the auteur theory. His work defines him as a searcher, a road movie antihero still looking for his mythical home on the horizon. One of the most interesting nomads in a film culture filthy with them, Skolimowski was cut loose from the Eastern Bloc in the late ’60s and has been roaming the plains of the global industries ever since, coming full circle in his new film, lost in the icy Carpathian wilderness.
…
It’s a film designed to be noticed, a film about the Afghanistan war that doggedly, even perversely, resists overt politics; an on-location survival saga shot with a recognizable American-indie star (Vincent Gallo) who has not a word of dialogue; a physically rough ordeal that’s meticulously staged and framed on the razor’s edge between pulp excitement and arty poeticism but never quite tumbles into either camp.