What a cheap-ass movie. The fights are clumsy, the acting seems first-take, the overall look is made-for-TV and the audio always sounds like there’s a photocopier running nearby. It’s a fun time though, if you overlook the unpleasant bit where Foxy is drugged and raped by rednecks. At least she reserves her harshest revenge for these two guys – one gets his face torn off then they both get set on fire. Can’t you just picture a twelve-year-old Quentin Tarantino sitting alone in a broken-down movie theater burning this movie into his brain?

Pam Grier (who’d already starred in Coffy and a couple others) is in love with her undercover boyfriend “Michael” (Terry Carter of Battlestar Galactica), who is killed by drug-dealer enforcers the day he’s released from the hospital post-plastic-surgery, because Foxy’s own brother Link rats on him for quick cash. 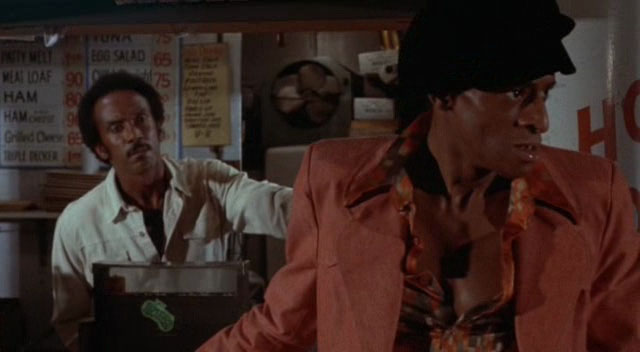 The movie shows us repeatedly that Foxy is a total badass, and Pam Grier is up to the task, but Antonio Fargas (best known as “Huggy Bear” on Starsky & Hutch) as Link is the one actor with enough energy to transcend his low-rent surroundings. On the other end of the spectrum are white crime lords Kathryn Loder and Peter Brown (a teen delinquent in Kitten with a Whip) who at least seem to be having a good time delivering their awkwardly terrible performances. Foxy masquerades as a prostitute, a dumb broad and a revolutionary, and kills pretty much everybody.