Found a new version of Fantomas – see also the Feuillade original, the stupid 1960’s version and the surrealist 1930’s short.

The original novels and/or serials may have been written as they went along, but in 1980 they should’ve had time to shuffle things a bit. Instead this first episode faithfully recreates the major plot points of the first Feuillade episode – master criminal Fantomas kills an ambassador, is having an affair with the dead man’s wife Lady Beltham, sneaks into a rich woman’s house handing out vanishing-ink business cards, is caught and sentenced to death but switches with an actor, who goes to the guillotine. In this version at least, Inspector Juve discovers the fake seconds after the beheading instead of seconds before – makes Fantomas’s switcheroo more of a sinister plot, less saving his own skin.

Written by Bernard Revon (two of Truffaut’s Antoine Doinel features) and directed by Claude Chabrol, who would tackle another silent-film master-criminal a decade later in Dr. M. Kind of disappointing for what used to be an adventure series – slow and talky, achieving in 90 minutes what Feuillade did in 60 (including intertitles). Fantomas doesn’t get a great introduction as a criminal mastermind, either. He starts strong, killing a woman en route to cashing in her winning lottery ticket under the nose of Juve (Jacques Dufilho of Black and White in Color). Then he breaks into the rich Princess Sonia’s house and. . . bugs her? After Juve catches on to the Lord Beltham disappearance, Fantomas is caught by the Belthams’ gardener, beaten up and handed over to the cops, then relies on his girlfriend, a gullible prison guard and incredible coincidence to escape prison.

Fantomas vs. the Princess:

Juve’s reporter friend Fandor isn’t a pre-existing character here, but the revenge-seeking orphan godson of the slain lottery-ticket woman. Juve assigns him a new name and destiny in an awkward scene.

Fantomas is Helmut Berger, star of some Visconti films. He’s good at playing both the criminal and the windbag actor doing a Fantomas play. Good to see the elegant Gayle Hunnicutt, star of Feuillade-affiliated Nuits Rouges, as Lady Beltham.

Directed by Juan-Luis Bunuel, immediately better than part one, more stylish and energetic. The plot is even stupider and more convoluted – a dead woman is planted in a half-deaf doctor’s house, while a gangster called Lupart has some scheme involving his prostitute girlfriend. The doctor is Fantomas (not sure about the gangster) taunting the police. Shootout at the docks follows, a definite throwback to the originals even if I don’t remember the rest.

Lady Beltham was presumed to be the dead body found earlier, but is discovered alive in a convent – and then she’s followed to her old house, where she has been secretly meeting with Fantomas. Two more good bits from the original follow, to lesser effect than in the silent – a snake attack and the house explosion that “kills” Juve. 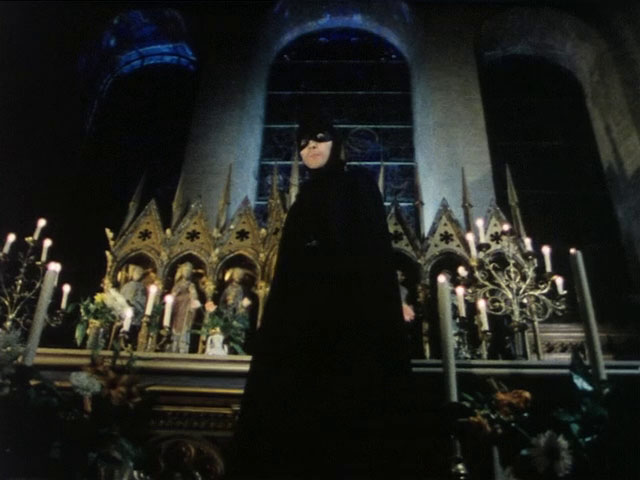 The Baroness (Danielle Godet of The Fighting Pimpernel) is told by her banker Fantomas that she is ruined. She’s soon found dead, and a young painter asleep in the same room – so the painter (Maxence Mailfort of elder Bunuel’s films and a version of Bartleby) is arrested and hangs himself in prison – then disappears from his cell. It’s always gotta be complicated.

Dead painter’s sister and Fandor are on the case, while an instantly recognizable Juve is undercover in the underground. A sweet train heist featuring a bulletproof mask breaks up all the dialogue and the pointless return of the princess from part one.

Fandor, stopped in his tracks by magnetic floor:

Back over to Chabrol, and it opens with Fantomas knifing a cat. Now he’s Mother Kirsh, friendly landlady in Moravia, and also a fake marquis, both framing a vacationing Fandor for murder then getting Juve caught under suspicion of being Fantomas, the master criminal whom nobody but Juve has ever seen. Lady Beltham, a kidnapped king, and trap-murders causing the cops to kill victims with strings tied to triggers and doorknobs. 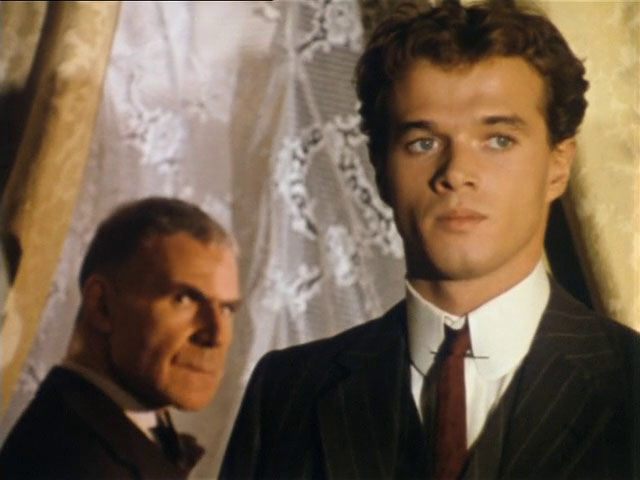 The dubbing seems worse than usual, and the subtitles aren’t perfect but I can’t complain. “To use the alarm clock technic to kill is abominable!” Nice that F. and Lady B. get away at the end. 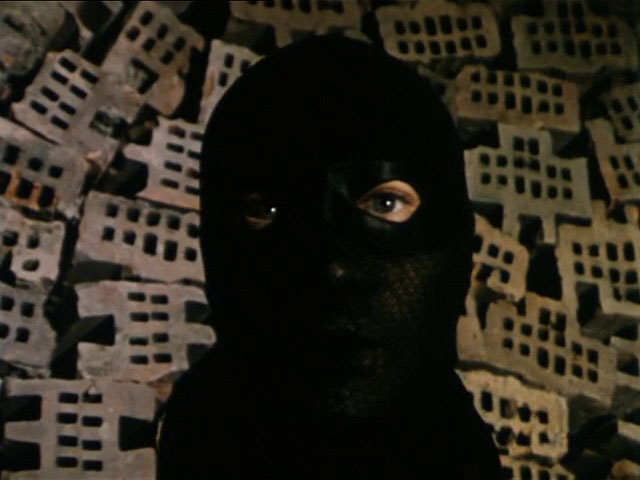