A pained old man in fancy garb staggers around before entering a secret room with his wind-up doll, and so dies top-billed Pierre Brasseur within five minutes. Soon his whole estranged family is summoned, and told that they’ll have to maintain his castle but can’t receive an inheritance for five years since the man’s body was never found. It is decided to turn the castle into a tourist attraction, using an electronic light & sound system to tell a ghost story. Meanwhile, all the (generally disrespectful) cousins and siblings and girlfriends and spouses are gradually turning up dead, leaving fewer in line for the inheritance.

Dead man in the walls:

Both movies feature a guy aiming a gun at his reflection: 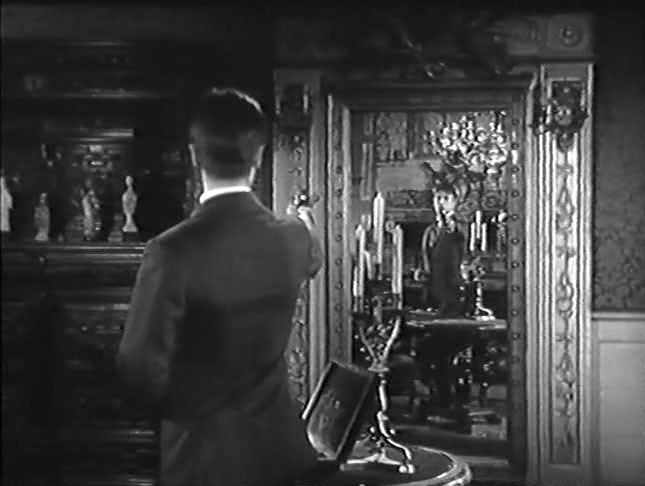 Murder story full of unmemorable characters, a stock mystery with a less mysterious atmosphere than most of Franju’s non-mysteries, and my faded grey VHS tape defeating Franju’s usually deep shadows. Jean-Louis Trintignant (star of My Night at Maud’s) is our young protagonist, with his girlfriend who is not into the whole castle thing (Dany Saval of the Envy segment of The Seven Deadly Sins). I like how her car radio is tuned to the movie’s score, a sweeping, upbeat waltz. Gerard Buhr (of Bob Le Flambeur) dies first, then Philippe Leroy (fresh off his debut in Becker’s Le Trou) is killed in a jealous rage by Claude, husband of Jeanne (Pascale Audret of Phantom of Liberty), who later jumps from a tower in front of a paying audience (after being attacked by an owl!). An unseen evil manipulating people to their deaths using a microphone and sound system – someone has been watching Dr. Mabuse movies. 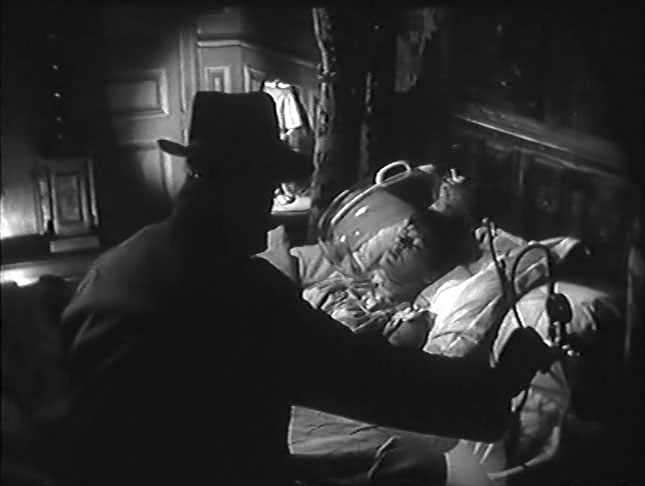 Marianne Koch (A Fistful of Dollars) is thrown from her horse but lives, helps unmask the killer/instigator as Jean Ozenne (Bunuel’s Diary of a Chambermaid). They get Jean Babilee (the great dancer of Duelle) to shoot Ozenne as he’s escaping, then we see Babilee attend the funeral so I guess that turned out okay. Same writers as Eyes Without a Face and cinematographer as Judex.

Don’t think I’ve ever seen a horse running with its hair on fire before. Thanks, Franju. A WWI movie based on Cocteau’s story of a blank-faced boy faking his way into the war. Thomas (Fabrice Rouleau, son of the actor who played the mysterious leprous baron in L’assassinat du Père Noël) uses the charmed name of his general “uncle” to ferry socialite nurse Emmanuelle Riva (star of Hiroshima Mon Amour) through barricades. Industrialist Jean Servais (the Stephanois of Rififi) wants to marry Riva, finds out the truth about Thomas.

Was less interesting in the second half, as Servais pulls strings to get Thomas an actual army position with Captain Roy (Cocteau regular Edouard Dermithe, hot young poet of Orpheus). A lot of strings are pulled in this movie, all to get unhelpful people closer to a war they should be avoiding. Roy gets a soldier killed through reckless flashlight use, reluctantly sends an eager Thomas on a mission that gets him shot, then Riva’s Thomas-smitten daughter kills herself. Slow, elegant camera – this would be worth seeing again if a better copy shows up.

Released two years after Cocteau’s death, supposedly inspired by his experiences as an ambulance driver during WWI.