Great picture quality on my downloaded copy, but forgot it had no subtitles. Movie seemed to show statues and masks in a museum setting, then as part of daily life, and finally in a large storeroom in a government building. Half an hour long.

Harvard Film Archive, or someone they’ve quoted, says: “This collaborative film, banned for more than a decade by French censors as an attack on French colonialism (and now available only in shortened form), is a deeply felt study of African art and the decline it underwent as a result of its contact with Western civilization. Marker’s characteristically witty and thoughtful commentary is combined with images of a stark formal beauty in this passionate outcry against the fate of an art that was once integral to communal life but became debased as it fell victim to the demands of another culture.”

Chris Marker wrote the commentary, not a bit of which I understood. Actually I got the word “mask” a few times. Don’t think this will help Katy’s research any, but she graciously watched it with me anyway. 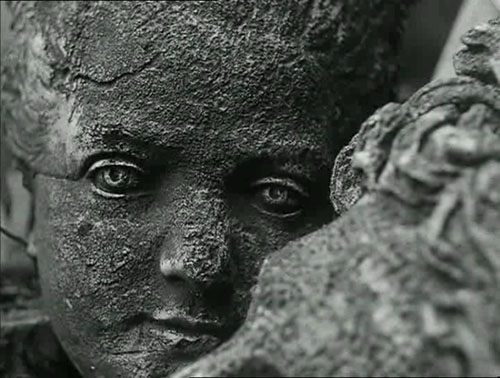