Shot immediately after Nosferatu. Kinski looks worn out, stupid and insane. IMDB says “The entire 80-minute film was shot with only 27 cuts.” but I remember five or six in the opening credits alone, so nice try. I didn’t know there was a best supporting actress award at Cannes, but Eva Mattes won it. Movie was trounced by Tin Drum and Apocalypse Now for the grand prize, though, and it’s not on either of the top 1000 movies lists that I track, but it’s now on mine. Looks just like Nosferatu, same crew worked on it. All giant buildings and city and space dwarfing our characters. Feels like a play – you can totally tell the way people talk to themselves that it was written for the stage. Dialog is awesome. Writer Georg Büchner is famous mostly for Woyzeck, and this is one of twenty film adaptations of it. 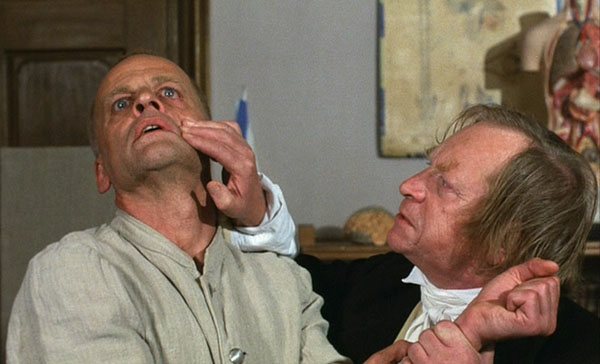 Kinski is a soldier, or a military barber I guess, in the 1800’s. He’s seeing Marie, and has been for a while since they have a son together. Lately Marie likes a drum major, no surprise since Kinski is completely nutty and nervous, due in part to the all-peas diet his doctor (above) has him on. After a movie’s worth of foreshadowing that crazed Kinski will kill someone and most likely his wife, he kills his wife down by the river. That’s it, except the film and script are way more poetic than my description.

V. Canby in the Times: “At the heart of each Herzog film is a mystery, not because information is arbitrarily withheld, but because every Herzog film is a record of the director’s questions and speculations about his subject — which is, I suspect, why he chooses to do the films he does. To do anything else would be storytelling of a kind that doesn’t interest him. Questions for which the answers are simple aren’t worth asking.”

Shadow of the Vampire should’ve portrayed Klaus Kinski as a demon instead of Max Schreck. Anyway, I’d like to see Malkovich playing Werner Herzog.