Before looking for critical articles and reading the Criterion extras, I supposed this was an important film for a few reasons. Firstly, it’s part of the French New Wave movement to bring the new, portable film cameras into the streets. Then it’s a portrait of the times, an ethnography of 1961 Parisians and their thoughts, two years before Le Joli Mai did similar work with a more political flavor. And it’s also a total meta-film, which I hadn’t realized going in.

Rouch & Morin introduce their “novel experiment of film-truth” to interviewer Marceline. I correctly assumed this was Marceline Loridan Ivens of A Tale of the Wind. Either I’d read it before, or she was mentioned in opening credits, or she’s just the only Marceline I know of. Anyway, they intend for her to ask people “how do you live? What do you do all day,” and everyone’s acting like this is the first time people have ever been interviewed on camera.

A backlit Marceline from the best shot in the film: 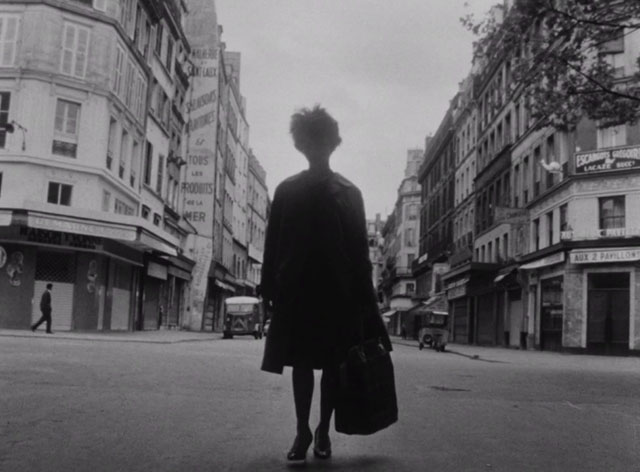 Then a montage of Marceline interviewing people on the street, or trying to, since nobody is much interested. I was afraid the whole movie would be like this. They find some people willing to talk (ahem, friends of the filmmakers) and hang out at their places. They find a black student named Landry, and one of the first questions is “so you don’t mind being black?” Marceline gets her own turn to speak, then they regroup and discuss their progress. “So far, the film has confined itself to take in the events of this summer of 1960,” then they bring in the war in Algeria, racism, the newly independent Congo, Marceline’s concentration camp tattoo (Landry: “I’ve seen a film about them, Night and Fog“) which leads into a dreamy monologue about her camp experience, and the movie starts to get interesting. Interview subject Angelo is being harassed by his employer for participating in the film. Landry goes to St. Tropez as “the black explorer of holiday France.” Morin: “You know Rouch and I are making a film. We don’t agree. Rouch thinks life is fun and I don’t.”

This is the first movie I’ve seen to include its own test screening. Participants and non-participants give their reactions. “It’s completely phony.” “Extremely painful. When it’s not terrifyingly boring, it’s at the cost of total indecency.” Finally, the directors interview each other about the test screening results. “As soon as they’re more sincere than in life, they’re labelled either as hams or exhibitionists.” One of them finally decides the film is about the failure to communicate (isn’t that what all films are about?). 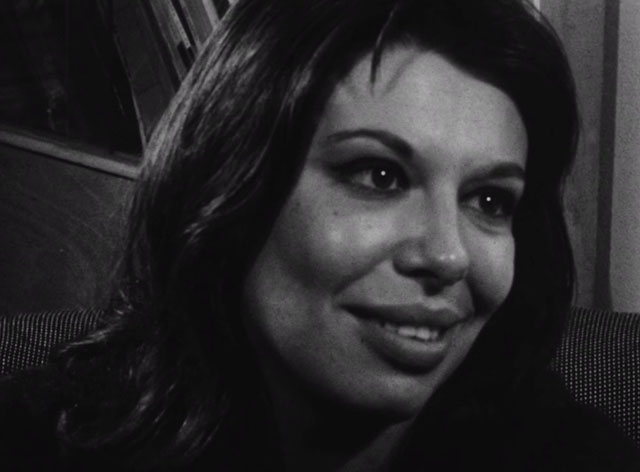 and her boyfriend Jacques Rivette: 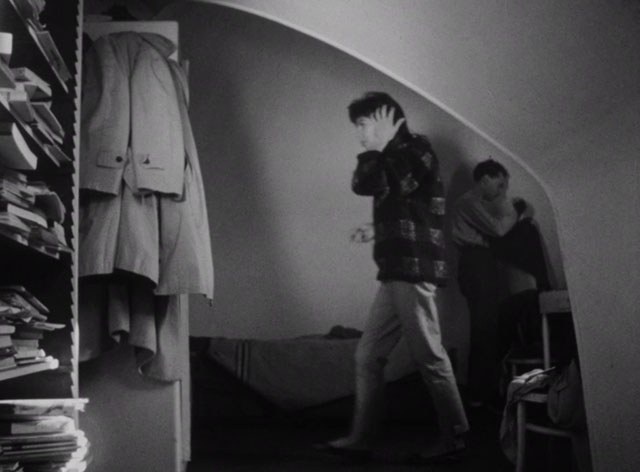 Morin was largely responsible for the film’s radical content: alternately analyst, priest, and spectator, he led the in-depth conversations that formed the backbone of the project and worked to facilitate moments of communal contact … Rouch, on the other hand, was concerned with form, and spent much of the production developing a walking-camera approach – they called it “pedovision” – that offset the closed-room structure of his partner’s scenes with renegade expeditions into contempo­rary France. While the film’s oscillation between sincere attention (Morin wanted to listen) and anarchic exuberance (Rouch brought water skis) almost justifies Morin’s self-deprecating description of the two of them as a kind of Martin and Lewis of ethnographic cinema, what matters more than these differences is the fact that, as partners, they shared fundamentally similar values. Both were confident that cinema offered a means to analyze everyday life; both believed that invaluable discoveries could result from what Lautréamont and the surrealists framed as the friction of unexpected encounters; both were convinced that their film would be determined by the chance associations and meandering pathways of open-ended conversations.
…
For Chronicle, Rouch and engineer André Coutant developed a prototype of the first handheld, sync-sound 16 mm camera ever used in France.

I thought we would start from a basis of truth and that an even greater truth would develop. Now I realize that if we achieved anything, it was to present the problem of truth. We wanted to get away from theater, from spectacle, to enter into direct contact with life. But life is also theater, life is also spectacle.