Gymnopedies (1965, Larry Jordan)
An egg floats around on different backdrops interacting with various objects, all cut-out animation a la Gilliam or Borowczyk, set to calm piano music. Feels more like a proof of concept than anything else – if there was a narrative present, I didn’t catch it. Cute, though. 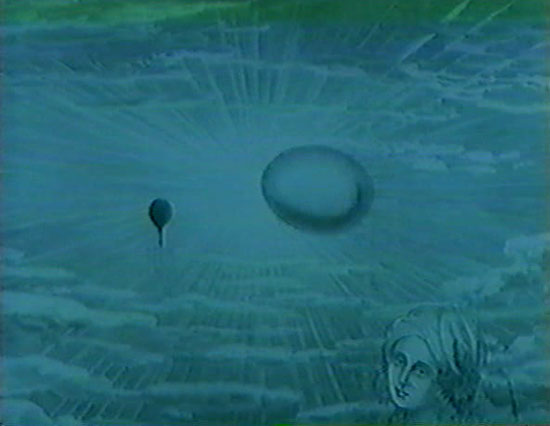 Lipstick (1999, Pascal Aubier)
Single 6-minute shot beginning under a bed, unsubtitled. Family is getting ready to leave for a trip, the mother is briefly visited by her lover who comes in through the window. Aubier was assistant director on some French New Wave classics in the 60’s, now an actor and a director of (mostly) comic shorts. Liked this a lot (and not only because of the naked dancing), will have to check out more of his stuff. 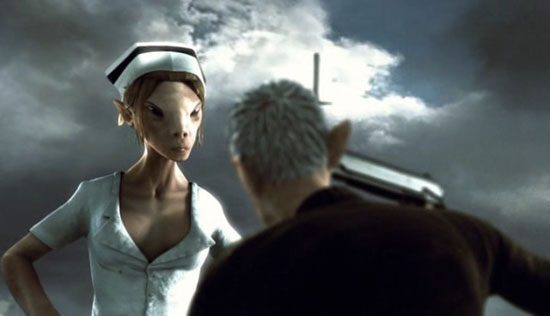 Happy-End (1996, Peter Tscherkassky)
Found footage of a couple sitting down for dinner, toasting the camera, drinking… and drinking and drinking! Dancing, drinking, sitting, more drinking. Different days, different clothes, edited together, eventually with scenes superimposed atop each other, a haunted distortion of a French pop song as the soundtrack.

Two Solutions To One Problem (1975, Abbas Kiarostami)
Very short with narrator, two kids get in a fight over a torn book. We tally the damages then rewind, and instead of starting a fight, they help repair the book and remain friends. Nice. 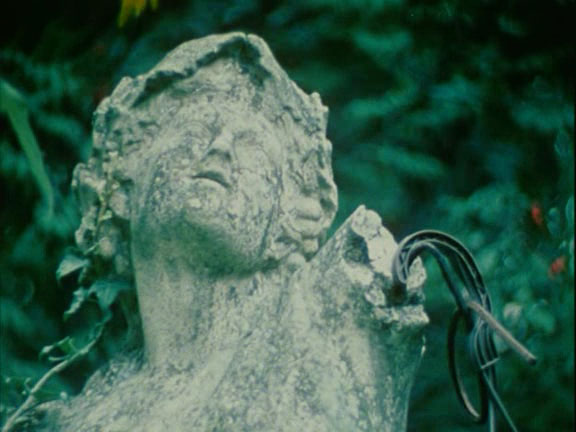 A Girl, She is 100% (1983, Naoto Yamakawa)
Wow, that wasn’t very good at all. They must’ve thought it’d be the simplest Haruki Murakami story to film. Straightforward, with some good still photography and some bad acting by our IMDB-unknown hero, closing with some rockin’ 80’s music. 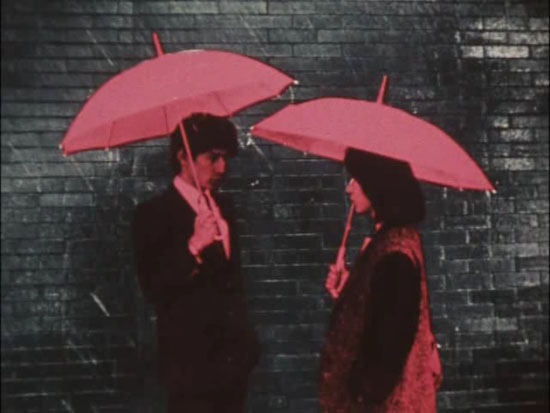 Foutaisies (1989, Jean-Pierre Jeunet)
Young Dominique Pinon with 80’s hair tells us about the things he likes and does not like. Very Amelie-feeling, with Delicatessen opening titles (and Deli‘s lead actress). 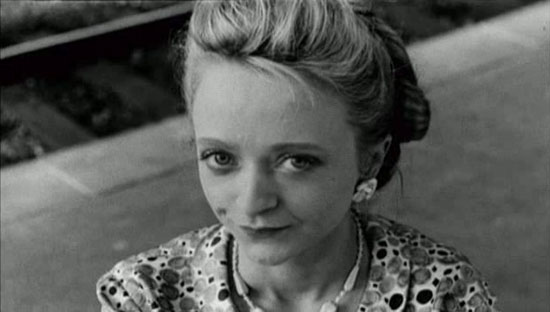 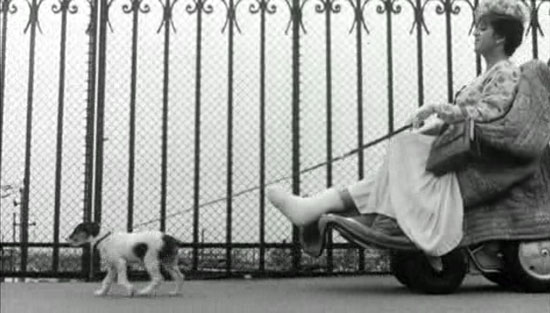 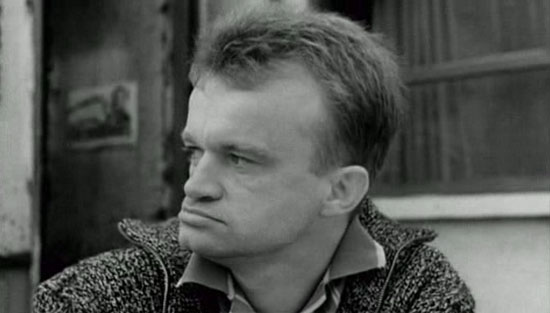 The Hitman (2001, Ruben Fleischer)
Mary Lynn Rajskub decides to be a hitman, but her first mark (Paul F. Tompkins) decides not to go through with it and asks her out instead. Just your typical indie comedy short. From the director of Girls Guitar Club, whose film career didn’t take off, I guess.

What Is That (2001, Run Wrake)
Buncha funny animated business involving insects and meat and ringing sounds. Cute, but only three minutes long and pretty inconsequential… not up to Rabbit level. Guess it’s an early work. 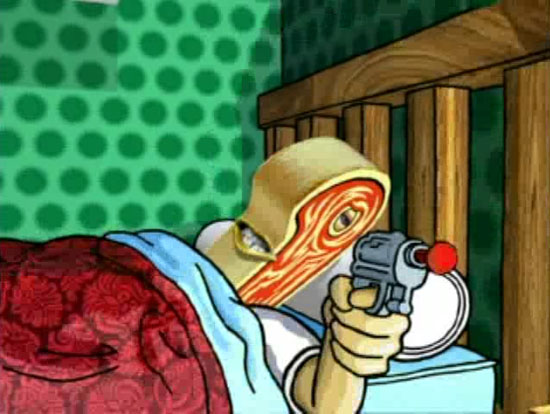 Film Noir (2005, Osbert Parker)
Awesome, very short. Like Fast Film but slower. Some After-Effects-lookin’ animation combined with models and lots of cutouts – not trying to tell a story, just cool visuals/mood. Ahhh, the internet reveals that it was all created in-camera – impressive! 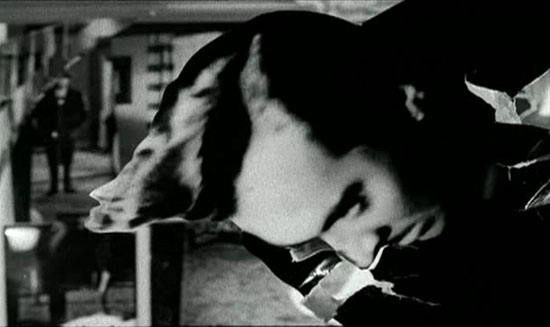 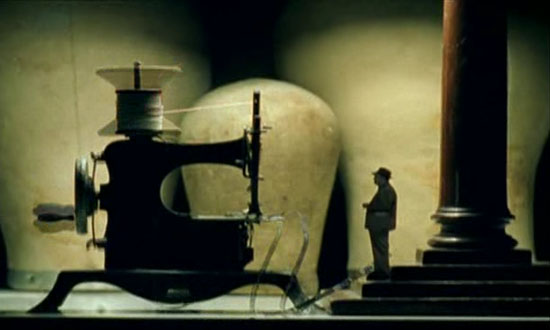 Banquize (2005, Claude Barras)
Boyer’s French Dictionary: “banquize – heap of floating ice frozen together in close masses.” Might be called Banquise, actually. Simple animation, fat kid wears his snow clothes in summer, dreams of living on banquize and playing with penguins. One day trying to hitchhike there he drops dead from heat/dehydration. Hmm.

Herakles (1962, Werner Herzog)
Herzog’s very first film, six years before his first feature. This was really good, and not like anything else I’ve seen by WH. Pretty simple structure so I’ll let wikipedia take it below.

The film relates to six of the twelve labours of Heracles. The film starts with shots of young male bodybuilders working out in a gym, posing on a stage and flexing their muscles. Each of the labours are then announced by on-screen text in the form of a question, followed by related scenes of modern challenges intercut with the bodybuilders. The audio track of the film is saxophone jazz and sounds from a gym.

Matta (1985, Chris Marker)
“What I am showing here is no exhibition. It is an appeal: Come and play with me! It’s a very lively game, but nothing happens.” Simple interview with Chilean artist Matta (not surprisingly an Allende supporter), an original member of the surrealist group, talking coherently about his art and all art, human beings, dimension and meaning. Would be nice to get/make a transcript. Would be even nicer to have been able to see the Matta paintings that Marker frames him against, but my video was too low-quality to make out much visual detail. 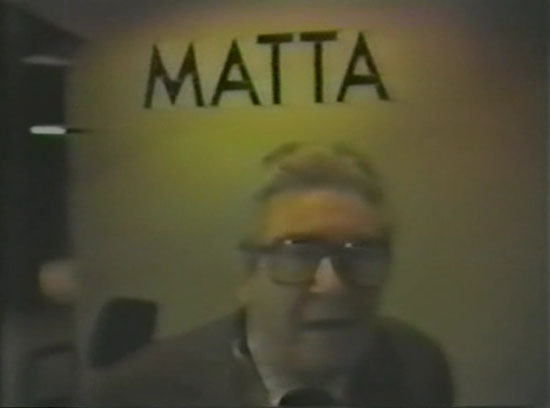 Not as audacious as La Soufrière nor as profound as Grizzly Man or moving as Little Dieter Needs To Fly, but has its measured share of audacity, profundity and… moving… ness. Motion? Werner goes to Antarctica to look at things, interview people, and express his contempt for it all. He finds some stuff to love, and there’s some gorgeous, wondrous underwater photography (non-Herzog-directed) by Henry Kaiser – THE Henry Kaiser, guitarist friend of Fred Frith – who also did the music. For above-ground shooting Werner brought along his Rescue Dawn/Little Dieter cinematographer Peter Zeitlinger.

We get the obvious “ice is melting and we are all doomed” bits, and shots of penguins, and interviews with the philosophers and scientists who live (either temporarily or not) in the ugly US base city of McMurdo. Touristy reaction scenes and the training sessions given to visitors before they’re allowed to leave the base. Then there are more typically Herzog moments. He comments on the commercialization of the south pole, the end of human discovery over the planet, signs we leave behind for future generations and visiting aliens. He cuts off some interviews, giving his own postscripts and summaries and arguments in their place (interrupts one woman flatly saying “her story goes on forever”). It’s a cool movie and a nice addition to Herzog’s philosophical travelogue cinema of human behavior on the edge, probably not destined to be a classic Great Film. Was very happy to see it on the big screen, and it was a nice breather among all the avant-garde shorts. Katy was a little disappointed with her first Werner Herzog experience, then I think after I told her she’d already seen a Herzog film and it was Nosferatu: Phantom of the Night, she liked Encounters a little more by comparison.