After Love & Friendship in the early afternoon, I was gearing up for a night of comedy. Checked out the first episode of Maria Bamford’s Lady Dynamite (featuring Patton Oswalt), then watched Patton Oswalt’s great new standup special Talking For Clapping. Patton is super funny, but whenever he mentioned his (recently deceased) wife or their daughter I got a little sad. Deciding to follow that up with something lighter, I put on the great Bobcat Goldthwait’s documentary on his comedian friend Barry (which of course also ended up featuring Patton), forgetting that Bobcat movies are never light, unchallenging fun. So when Cindy Sheehan showed up, and Barry appeared at a Senate hearing shutting down an AOL lawyer, and none of this is funny (but it’s a hugely better film than I imagined it’d be), I shouldn’t have been surprised.

Barry Crimmins goes way back with the director. Barry used to call himself “Bear Cat,” so as a spoof, some of the young comedians who frequented his club nicknamed themselves “Tomcat” Kenny and “Bobcat” Goldthwait, and one of these names stuck. For a comedian I’d never heard of, he has some powerful fans: Marc Maron, David Cross, Steven Wright, Louis CK. But you don’t think of comedians and artists as literal heroes… sure, Lenny Bruce went to jail and George Carlin and Frank Zappa went to court to protect freedom of speech, but Crimmins made a different sort of legal impact, getting the ball rolling on prosecution of online child pornographers, a pet issue of his since surviving child abuse. So the movie goes to very dark places and comes out cathartically on the other side. I loved it.

I looked up whether Barry’s got any stand-up specials, and there’s one being taped three hours away a few days after I watched this movie… hopefully I won’t regret skipping that (couldn’t get anyone to come along, can’t spend the night because of birds, and that’s a long way to drive alone) but I’ll buy the video version the minute it hits Louis’s site.

Back to straight comedy the next day, I watched Hannibal Takes Edinburgh. I was more listening than watching, but I kept looking up to see if Buress visited any locations I recognized, distractedly forgetting until halfway through the special that I’ve never been to Edinburgh.

Short, found-footage movie where Jim (Bryce Johnson, unsympathetic fiancee in Sleeping Dogs Lie) is a bigfoot obsessive visiting the site of some famous footage, and Kelly (Alexie Gilmore, Robin’s girlfriend in World’s Greatest Dad) is the girlfriend filming and humoring him. In the first half they interview locals and get warned away from the woods, but they forge ahead, and in the second half they’re tormented then killed (after laughably not bringing a map or compass or any way of finding their way out of the woods) by the very bigfoots they hoped to observe.

It sounds very bad, but wait, it’s by the great Bobcat, creator of some of my favorite recent comedies, so surely there’s more going on, some subversive genius to this seemingly dated and pointless movie, or at least a great comic twist? Nope, just the Blair Witch-meets-Grizzly Man premise described above. There’s a kinda great 15-minute shot where they wake up hearing approaching bigfoots (making me imagine the movie’s better with surround sound), and the actors are both committed, but overall it’s a bust.

Amy invites her fiancee to her parents’ house for the usual awkward-family comedy setup – though usually there isn’t a racist meth-addicted brother (Jack Plotnick, star of Wrong) who goes to prison at the end of the movie, causing his mother to have a fatal aneurysm. Before all the prison and death, Amy and her man are having a “you can tell me anything” moment and he doesn’t take her confession well, plus the brother overhears and blabs to everyone.

It’s not generally a laugh-out-loud comedy, but towards the end as Amy is dealing with her breakup, her mom’s death, brother’s imprisonment and dad’s unforgiving attitude, Brian Posehn stops by her place with just the best scene, saying a string of awkwardly terrible things. He and Amy’s father Geoff Pierson (my favorite Goldthwait actor, also playing authority figures in the other two recent ones) are highlights.

Robin Williams is an unpublished author and a disrespected high-school poetry teacher. He’s got a beautiful young girlfriend and a shitty, hateful, porn-obsessed son Kyle (Daryl Sabara, one of the Spy Kids), who dies during an autoerotic asphyxiation session staring at cellphone photos up his dad’s girlfriend’s dress – so Robin stages it as a suicide and writes a note.

Upon reading the suicide note, everyone suddenly sees the “real” Kyle:

Except friend Andrew, who sees some kinda weirdo poet:

The note becomes huge news on campus and soon everyone is acting like Kyle and his dad are heroes. Kyle’s “journal” (hastily written by Robin) is locally published, and his story inspires everyone: a closeted homosexual athlete, the goth girl considering suicide, the guidance counselor nobody talks to… everyone except Kyle’s best (only) friend, who sees through the ruse and tries to talk to Robin, who’s too busy dealing with his new celebrity.

Bobcat plays the chauffeur who takes Robin (and his self-obsessed girl) to a TV studio to discuss the inspirational journal (Tom Kenny and Jill Talley cameos), and national publishers express interest in the journal and in Robin’s novels, but he finally confesses the lie and goes home to watch Night of the Living Dead with his group of misfits: the lonely next-door neighbor and Kyle’s one friend. Amazing blend of humor and pathos, like when Robin starts crying in front of a porno-mag street vendor. 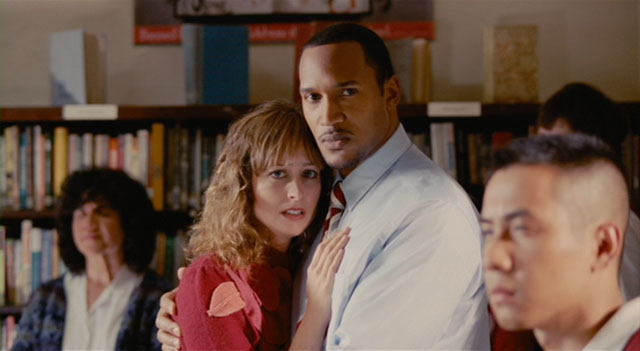 Of all the loud genre movies I rented this week, this one was the champion. A lot like Super (or a comedy Falling Down), a hilarious piece of wish-fulfillment that turns ever-darker. Joel “Bill’s brother” Murray hates his life (in which everyone calls him “bro”) but mostly hates self-centered airheads on television, so after he’s fired then misdiagnosed with a Joe vs. the Volcano-esque brain-plot-device, he chooses to go on a rampage instead of killing himself, killing a spoiled sweet-16 reality star, then her parents. It gets uncomfortably more similar to Super when Frank unwillingly attracts a teen-girl sidekick (Roxy) whom he keeps calling “Juno”.

Watching this a week after some nut shot up a Batman screening, I was surprised at the scene where Frank and Roxy shoot up an underattended movie matinee because a row of teens wouldn’t shut up and put down their phones (scored to a cover of Bjork’s It’s Oh So Quiet). They kill a republican TV talking-head, a guy who takes up two parking spots and a funeral-protesting cult leader. The media keeps misinterpreting their motives, and the killers grow more comfortable with their motels-and-murders lifestyle, gearing up towards a lovingly-shot slow-motion suicidal massacre on a live American Idol-like show.

The AV Club gets it:

It isn’t a funhouse mirror; it’s just a mirror. The debasement on its airwaves isn’t some Ow My Balls-style future Idiocracy, but rather a straightforward reflection of what’s already present… The key point about God Bless America is that it’s extreme but not exaggerated, a dark comedy that indulges — and questions — a violent, misanthropic fantasy about laying waste to the cultural landscape while staying grounded in a recognizable reality. In other words, Goldthwait isn’t doing the satirical equivalent of shooting ducks in a barrel here, though his recreations of televised stupidity do offer a funny twinge of recognition. What interests him more is how we live in that culture, particularly those who are alienated by it.

I could have made a whiney movie or a documentary about how nasty our culture is, and a couple of other people that may see things the way I do would have liked it. Or I could have made a comedy that was very aggressively saying, “Cram it” to all these people, and that’s what I chose to do.