Michael Nouri (of Flashdance and the original Captain America) is hotshot supercop Beck, and after an ordinary citizen goes on an outrageous crime spree, Beck is joined by serious FBI-guy Kyle MacLachlan (the year after Blue Velvet) who’s on the trail of a body-swapping alien that likes fast cars, hot girls, loud music, and doing murders. The alien’s motivations seem more human-joyride than world-endangering, so its interest in a senator is aiming for high-stakes Dead Zone/Omen III drama but I dunno. Either way, FBI Kyle turns out to be possessed by an alien hunting the rogue alien, and when he check “himself” out in a mirror it’s extremely Twin Peaks. 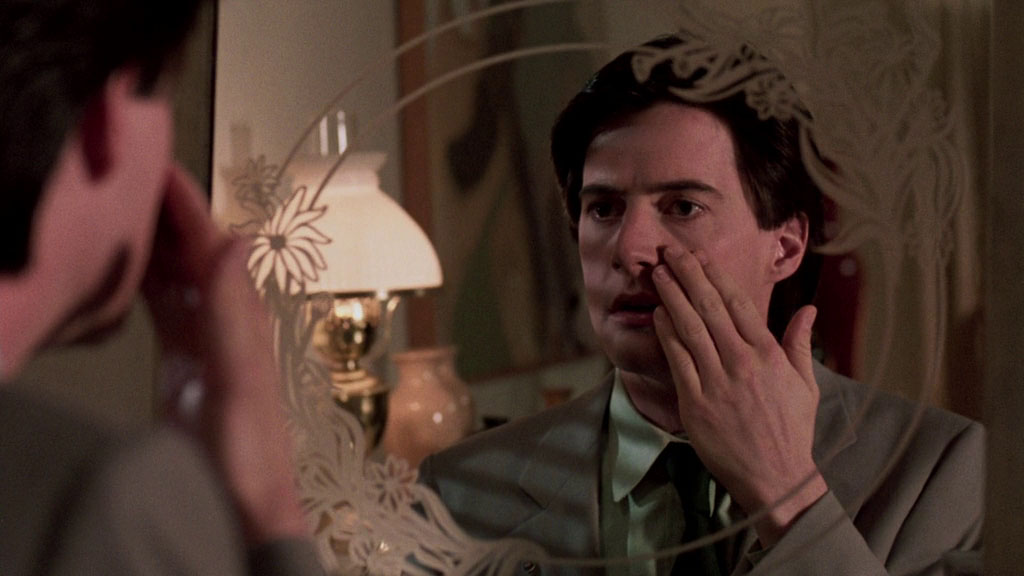 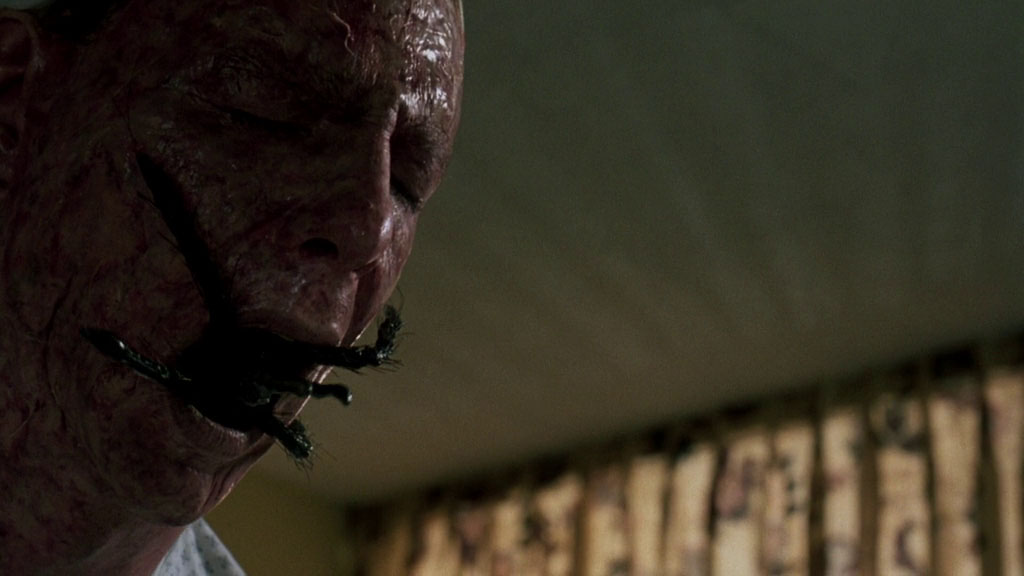 The first alien host is Hank Jennings, Norma’s husband in Twin Peaks, and the second host (William Boyett’s final film was Theodore Rex which has a surprisingly stacked cast) has a heart condition, to the annoyance of the alien who can’t run fast enough to carjack a convertible, so has to go to the dealer and steal one like an ordinary lunk. Then comes a stripper (Claudia Christian of Babylon 5 and Maniac Cop 2), then a dog… a cop who kills Danny Trejo… and the senator. Our heroes prevail, but Beck is fatally shot so Kyle Luzes into him. It is an 80s thriller, so there’s also a shootout in a mannequin factory, a ray gun, and a flamethrower. 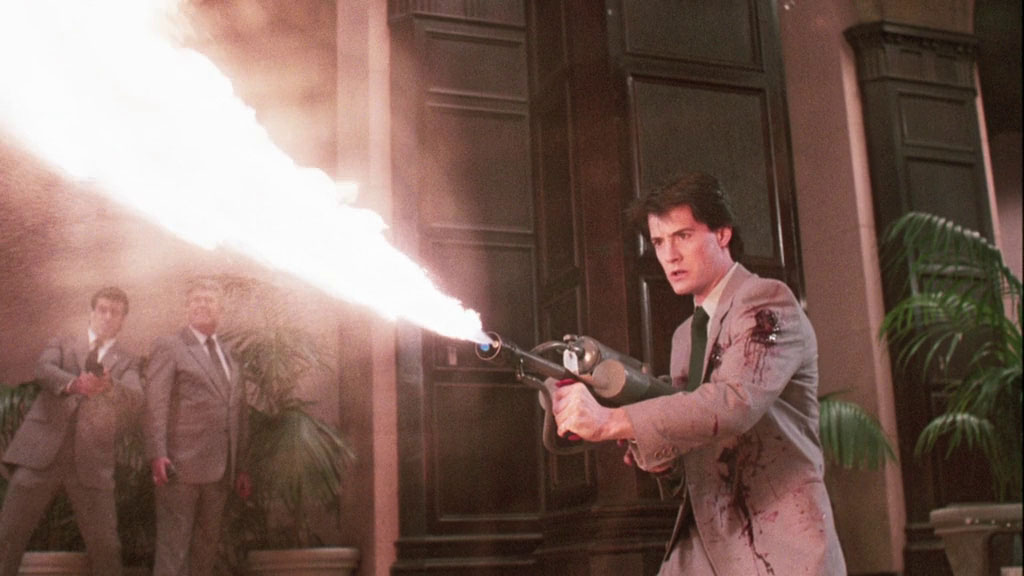 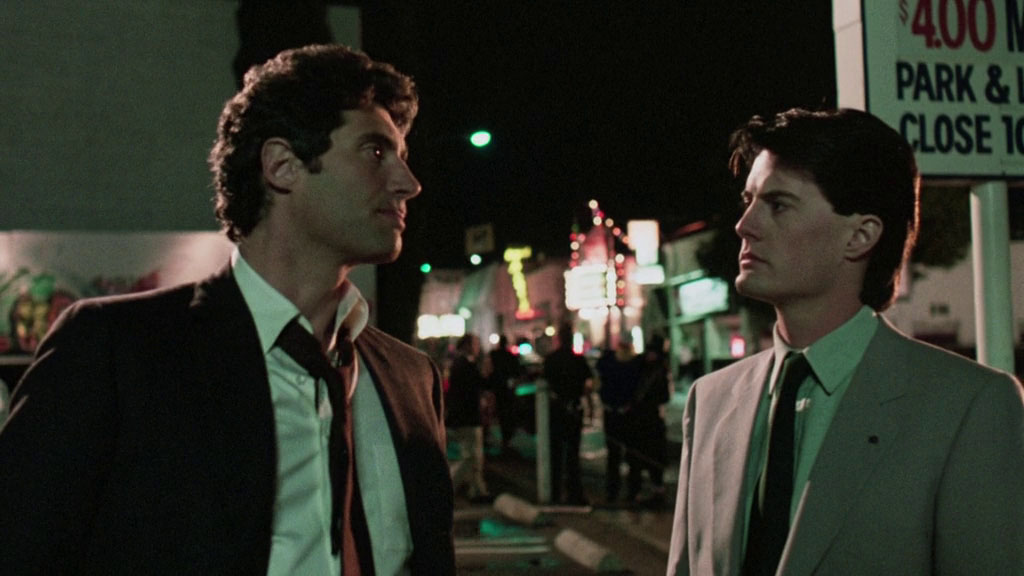 The writer later hit it big with Operation Dumbo Drop, then the National Treasure movies. Director Sholder, the DP and a couple producers had just made Nightmare on Elm Street 2, and apparently they expected to make part 3 since “the third elm street venture” is their copyright company. The 1993 Hidden sequel was directed by nobody, starred nobody, recast Beck and his wife, and had a lead character named MacLachlan.

An exciting anime feature, which we got to see on a big screen thanks to the Alamo (in a dubbed version which was refreshingly free of slumming Hollywood celebs). Jumps between protagonists, between bodies, between time and space, then throws in a town-destroying meteor. Incident and action piles up, more and louder, until the body-swapping boy appears to have saved hundreds of lives and we fast-forward to the couple’s first real-life (chance) meeting.

The film’s body-swapping setup foregrounds questions of identity, beginning with the way that both teens react to their new, temporary genders; Taki-as-Mitsuha spends so much time feeling up his own breasts, for example, that it becomes a running gag. Meanwhile, Mitsuha-as-Taki starts flirting heavily with a slightly older female co-worker at the restaurant where Taki works, and it really looks as if Mitsuha herself is smitten, rather than merely doing Taki a favor while she’s in control of his actions.

Like all of Shinkai’s films, the richness of the light coats everything it touches with such an evocative hue of nostalgia that the plot only puts a damper on things (and there’s a lot of plot here). Watching these colors bleed between Taki and Mitsuha’s divergent lives is all you need to appreciate the beauty of being in this world together, and the tragedy of how that same beauty always seems to slip through our fingers.