Sometimes a movie feels less like a cohesive work to be taken on its own merit than something to be picked apart. As a version of Shakespeare’s The Tempest it’s pretty okay, not as consistent or intelligible as the version we saw at the fountain in Piedmont Park, but more intelligible than Prospero’s Books was on VHS. Helen Mirren is wonderful as Prospera, the set design is marvelous and the rest is hit or miss. Too much flailing about before green screens, and I could’ve done without the song. Personnel in decreasing order of goodness:

– Tom Conti as the Richard Jenkins-looking companion of the king

– Ben Whishaw as the sprite Ariel

– the extras in the shipwreck scene

– Russell Brand as Molina’s companion – he was tolerable for a long time, longer than one would expect, but finally doesn’t belong in this movie or anywhere else.

Reminds of Heat in its attempt to build drama with a career criminal’s romantic relationship endangered by his line of work. But here the girl (Rebecca Hall, Christian Bale’s wife in The Prestige) was a hostage in the gang’s previous job – Ben Affleck was supposed to check on her afterward, eliminate her if she knows too much, but falls for her instead. She is traumatized by her heist & hostage experience so it’s no surprise at all when she’s working with the FBI at the end, although somewhat surprising that Affleck manages to escape the huge shootout after their final Fenway Park heist, killing boss Pete Postlethwaite then escaping to Florida.

Solid crime flick, though Ben is better at Boston-accented dialogue scenes and filming criminals wearing weird masks in cool poses than assembling distinguished action sequences. Jeremy Renner (between Hurt Locker and Mission Impossible 4) got an oscar nomination as the hotheaded, trigger-happy second in command (so, the Joe Pesci role), whose druggie sister (Green Lantern’s Blake Lively) the FBI gets to. FBI is led by Mad Men’s Jon Hamm, are very good investigators but not the best marksmen. Small roles for Victor Garber as a banker and Chris Cooper as Affleck’s imprisoned father.

Large-faced actor Jason Segal had a dream to resurrect the Muppets on the big screen, full of celeb cameos and musical numbers so he called up Flight of the Conchords (not Jemaine – he must’ve been busy on Men In Black 3). Proven cutey musical lead Amy “Enchanted” Adams is a love interest, Chris Cooper a villain, and Jack Black an unwilling celebrity guest. 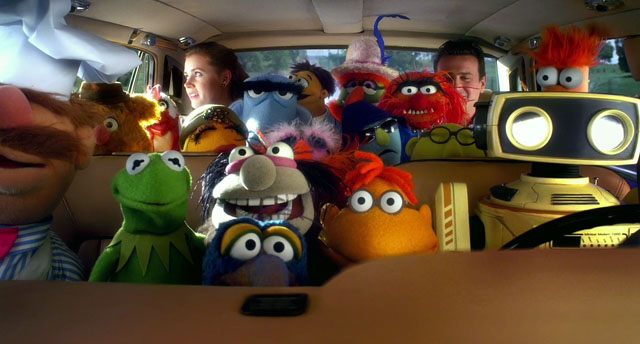 And it worked! Good movie, full of the same self-referential humor and silliness as the originals. Plot revolves around Segal’s friend (brother?) Walter, who is a muppet, idolizes the 1970’s Muppets and convinces them to reunite to hold a fundraiser to save their old studio from an evil oil baron. Two of the voice actors/puppeteers are from the original Muppet Show (and Fraggle Rock too) – including Gonzo. So why is Gonzo barely in the movie? (edit: oh it’s because of Muppets From Space) This one was Kermit and Fozzie-heavy, so maybe they’re saving the others for the next movie.

My favorite bit from the IMDB trivia: “Bret McKenzie taught Chris Cooper how to rap.”