A talky rich-person drama with lots of fainting – not usually my thing. Of course it’s sumptuously shot, and I got caught up in the drama by the end.

The earrings of Madame: 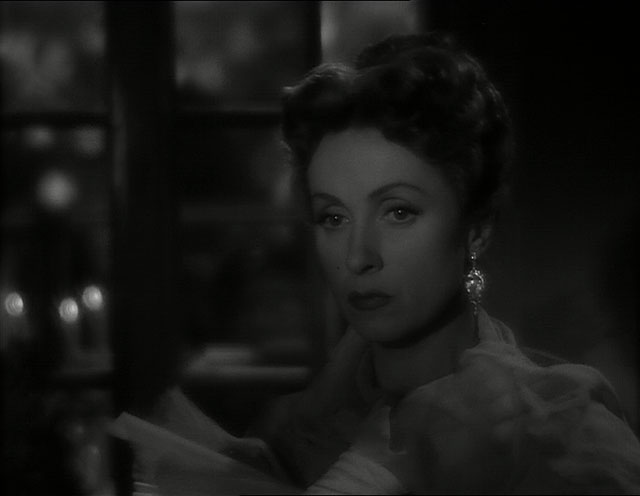 Charles Boyer and Danielle Darrieux, costars of Mayerling seventeen years earlier, are an upper-class married couple (she also played a married cheater in La Ronde, and I know Boyer from Stavisky twenty years later and Liliom twenty years earlier). He’s a general and a count, and she’s a socialite, secretly running up debts, so she sells a pair of diamond earrings, a gift from her husband. 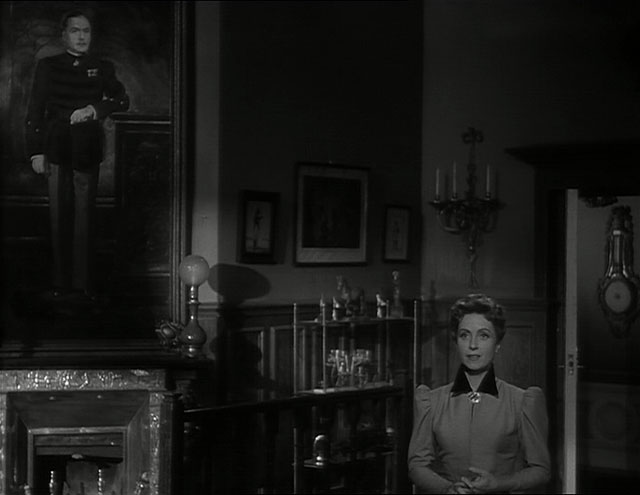 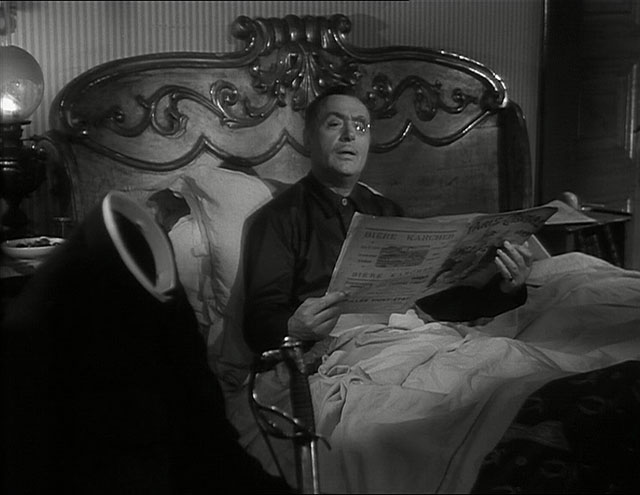 After she claims to have lost her earrings there’s a blow-up about possible theft at the theater, so the jeweler (Jean Debucourt of The Eagle Has Two Heads) contacts the general, tells him the story, and Boyer buys them back, gives them as a parting gift to his affair Lola. She immediately gambles them away and they’re bought by Baron Vittorio De Sica (the year after he shot Umberto D, six years before Il Generale della Rovere), who sees Madame Darrieux then stalks her at every party until she falls in love with him. 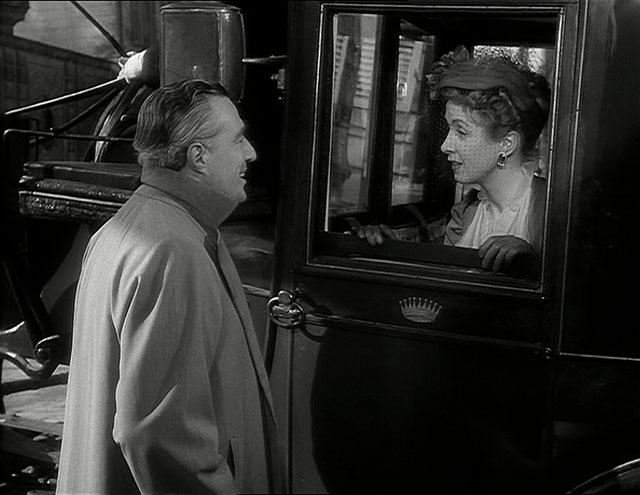 He eventually gives her the earrings, and she claims to have found the lost earrings – a sign to her husband of her extramarital affair, and a reminder of his. Feelings are hurt, honor is challenged, a duel is arranged – she gives away the earrings to a church before fainting to death as her husband shoots Baron Vittorio off-camera.

Ophuls’s second-to-last film, after Le Plaisir. Written by Louise de Vilmorin, who would adapt other writers’ stories into screenplays on The Immortal Story on Malle’s The Lovers.

[Madame de…], beginning in the lilting superficiality of a frivolous woman looking to pawn her jewels and ending in death and the ironic sanctification of those jewels, is Ophuls at his bleakest and most beautiful. The very opulence and swirl of the world from which Madame de is ostracizing herself — the opera, the gowns, the balls, the jewels, the servants — will be stripped away as love burns through the outer layers of life. A woman is rescued from shallowness and inauthenticity, but at what a price!

The last of his quartet of Hollywood films (nobody ever talks about the Douglas Fairbanks period drama The Exile). Ophuls’ attempts at style and elegance are mostly lost here, trampled by the silly thriller plot of this cheapie noir.

Best part is Joan Bennett (star of four Fritz Lang films in the 40’s) who goes to ever-lower depths to protect her foolish young daughter who’s been going out with a sleazeball (Shepperd Strudwick, who’d once starred as Edgar Allen Poe). Joan drives from her idyllic small lake town into the big scary city to tell the guy to piss off, but he comes by the house that night, falling to his death onto an anchor after the girl whacks him on the head with a flashlight. Great, wordless scene follows as Joan discovers the body the next morning then dumps it in the lake. 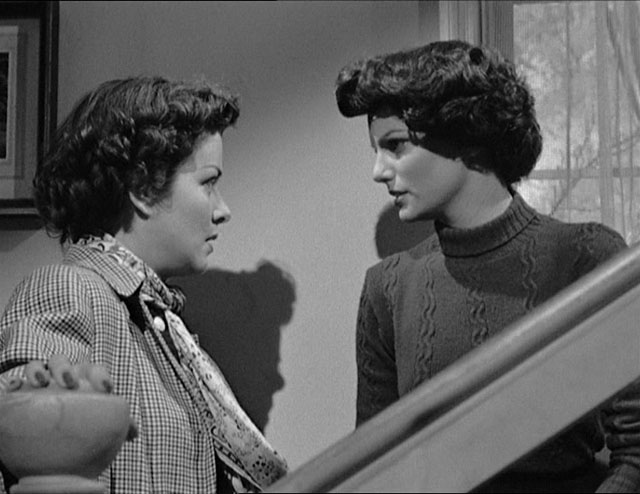 So the cops have found the body and suddenly irish-accented James Mason (returning from Ophuls’s Caught six months earlier) shows up to blackmail Joan over the dead guy. She tries to raise the cash, but with her husband out of town can’t manage it. Fortunately, unbelievably, Mason falls for her and tries to protect her from his partner who still wants the money (Mason is a terrible blackmailer). They nearly kill each other and Mason stages a car crash to get Joan off the hook.

Mason in the shadows: 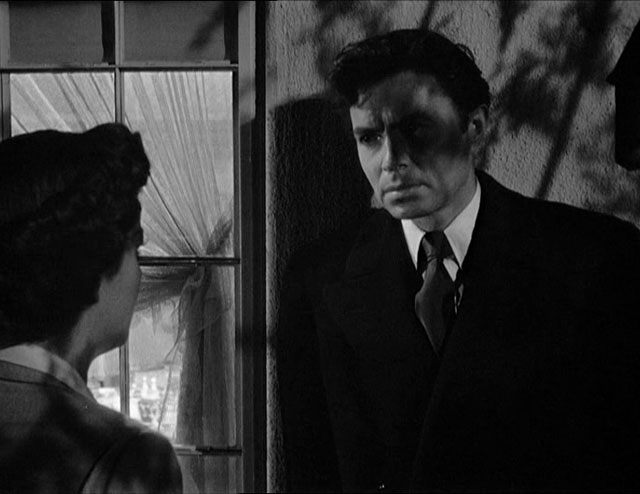 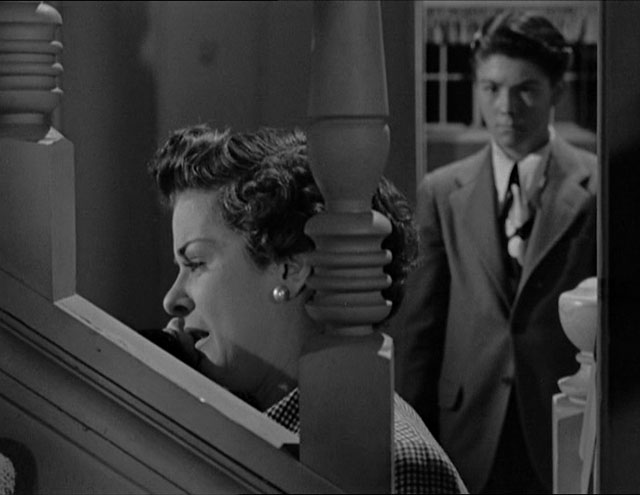 Since it’s a 1940’s movie the family has a black housekeeper, Cybil, who once says an entire line fully on-camera that got erased by the music score. Wonder what it was. Joan’s daughter mostly pouts in her room while Joan’s insufferably hollywood-youth-talkin’ son putters with his jalopy.

Based on a story for Ladies Home Journal, naturally. Remade with Tilda Swinton in 2001.

“Still, it’s very sad.”
“But, my friend, happiness is not a joyful thing.”

Three filmed short stories by Guy de Maupassant, reminding me of Quartet. It wasn’t great and made me not want to seek out any of the author’s books… there it also reminds me of Quartet. Not narrated by the author like Quartet was, since the author is dead, but rather by a sort of author character who shows up as an active participant (the artist’s friend) in part 3.

So, Lola Montes and La Ronde, and even Letter From An Unknown Woman would have been wonderful, but I chose to show Katy Le Plaisir instead and now she thinks I enjoy stodgy period pieces. Sure it had some sparks of life in it, but even the documentary extras on the DVD wanted to talk up the difficulty in finding locations and in making the film rather than giving a reason why people seem to like it. Stanley Kubrick once called it his favorite film, so surely there’s something there.

Movie starts out weird, kicking it into high gear with a creepy-looking masked man dancing gaily at a fancy ball, then quickly passing out. It is discovered that he’s an old man trying badly to recapture his youth and hit on young girls, to his wife’s patient dismay.

Centerpiece segment seems like it wanted to be the entire movie, but wasn’t quite long enough so they tacked on the other two bits… it must be over an hour long, about a whorehouse that the camera can never bring itself to go inside. Fortunately, the whores all come outside, closing up shop to take a trip to the country for an unexpectedly moving wedding, before returning home to the glee of the townsfolk.

Last bit, a model and artist fall for each other, but when things get rough and he might leave her, she tries to kill herself… they end up together forever, she in a wheelchair.

Haven’t seen a Max Ophuls movie yet that takes place in modern day… guy liked to create ornate depictions of times past. Some fantastic shots made the whole thing worth watching, incl. the artist meeting the model in the start of segment 3, and her suicide later, which switches fluidly from an objective to a subjective camera, climbs the stairs with her shadow cast before us then crashes through the window and down.

I am so bad at recognizing people, because Simone Simon played the model and I didn’t know it. Jean Gabin was unmissable as the friend/host in the country in the middle segment at least. Claude Dauphin (President of Earth in Barbarella) was the doctor in the first segment.

Set in Vienna, 1900, same as La Ronde. My third Ophuls movie, and the third with horse-drawn carriages.

Seems a straightforward old-hollywood love story at first, then seems a lot more grown-up and complex than its contemporaries after it’s over (and especially after checking out the DVD extras which conveniently explain everything so I don’t have to put in much thought myself).

Joan Fontaine lives in the same building as a famous concert pianist and falls madly in love with him. She lives her whole life thinking of him, but only meets him twice… once for a dream date at the end of which she gets pregnant, and again years later in a sad imitation of that date, where she desperately hopes he’ll recognize her, but he just recycles the same lines he used years earlier. She flees again, and as she and their son are dying of cholera, she writes him a letter telling her life story. He stays up all night reading it, forgetting to flee the duel he’d agreed to the night before with her husband. Nice.

Lots of graceful camera movements, one sick super excellent part I didn’t notice until watching the documentary (bottom screenshot) where she stands atop a staircase and watches him enter his apartment with a girl, repeated again later in the movie with the same camera position but with her as the girl. The kind of movie I like somewhat while watching, and like a lot more when it’s over… worth seeing again.

The novel by Stefan Zweig was filmed at least four other times. Ophuls made this between The Exile and Caught during his Hollywood period. The same year Welles made Macbeth, Hawks made Red River, Hitchcock made Rope, and the Italian Neorealist movement was taking off.

Joan Fontaine, star of Rebecca, Suspicion and Beyond a Reasonable Doubt: 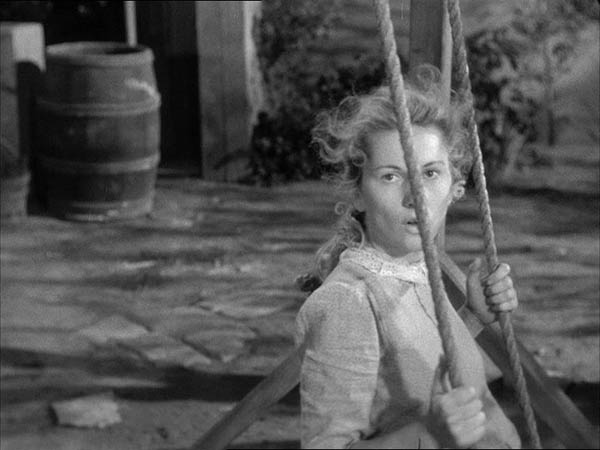 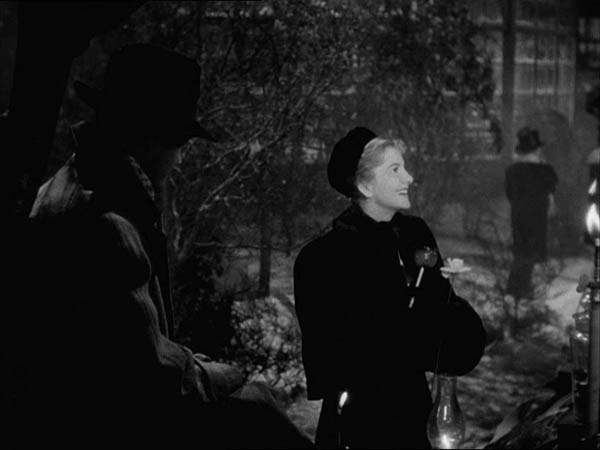 Louis Jordan, also of The Paradine Case, The VIPs, Octopussy and Swamp Thing: 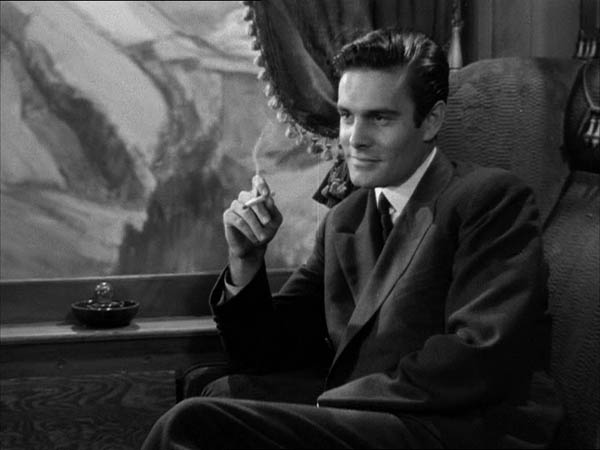 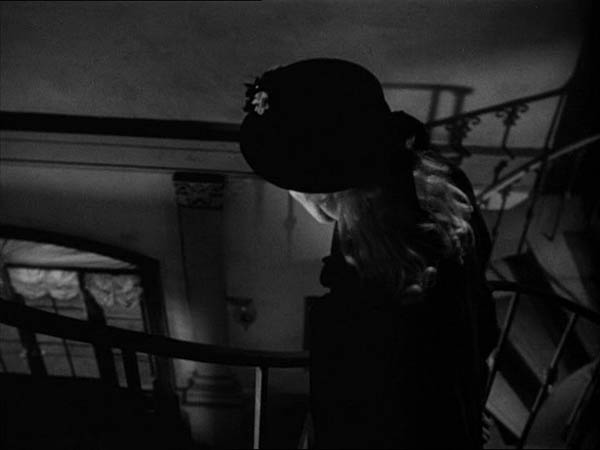 A theater adaptation that starts out stagey and effortlessly segues into movie form. The narrator shows up, walking around a carousel, tells us what’s going on, gives direction to one of the characters, and walks off into the set for the first scene, where the “movie” takes over… very nice. Then this guy keeps showing up comically in the other segments, reminding us of the structure of the movie, of the director/author’s presence, keeping things light and stagey whenever the scene threatens to take over. Of course we’ve got Ophuls’ camera roaming smoothly everywhere in long takes, nice photography and a whole bundle of good actors. I loved it. Much more “adult” than most movies, examines different facets of romantic relationships, one small scene at a time:

Prostitute & Franz The Soldier – he’s in a hurry but she picks him up and takes him under a bridge free of charge, for no apparent reason than the narrator told her to!

Franz The Soldier & Marie The Maid – still in a hurry, Franz manages to get Marie to leave a party and go walking with him. They do something or other on a park bench, but then he wants nothing to do with her after. She ends up fired from her job for staying out late, but the narrator assures her she’ll get a better one soon.

Marie The Maid & Young Alfred – the cutest segment… Marie and Al left alone in the house, trying to approach each other, successfully in the end.

Young Alfred & Married Emma – Al is renting his own bachelor pad these days and trying to be suave around Emma, who finally calms down and lets him.

Emma & Her Husband Charles – sitting up in bed talking about how completely unacceptable extra-marital affairs would be.

Charles & 19-yr-old Anna – Charles is suddenly the lech, running up the bill at a fancy restaurant to get Anna to go home (or to a hotel, I guess) with him.

Anna & Poet Robert – Robert is dreamy… too dreamy for the likes of Anna.

Robert & Actress Charlotte – Charlotte is too famous and dreamy for the likes of Robert.

Charlotte & The Count
The Count & The Prostitute – I start to forget the specifics towards the end of the movie, but gimme some credit, there was a lot going on.

The narrator is Anton Walbrook, a star of Life & Death of Colonel Blimp… prostitute Simone Signoret, a big star from a lotta movies I haven’t seen… soldier is Serge Reggiani, the contrary Don Francisco in The Leopard… the maid is Simone Simon, who I recognized from Cat People… Alfred is Daniel Gélin, who later worked with Hitchcock, Ruiz and Cocteau… Emma is Danielle Darrieux from 8 Women and Young Girls of Rochefort… her husband is Fernand Gravey… Anna is Odette Joyeux… poet is Jean-Louis Barrault, star of Children of Paradise… actress is Isa Miranda… aaaaand Count Gérard Philipe starred in Bunuel’s Fever Mounts at El Pao, released a month after he died.

Godard called it France’s worst film. I can’t figure that guy out.