The 2020 post-election ceremonial final SHOCKtober movie of this extended season. Convoluted murder-mystery involving a pianist getting a hand transplant then being set up by a con man to believe his new hands are committing murders. 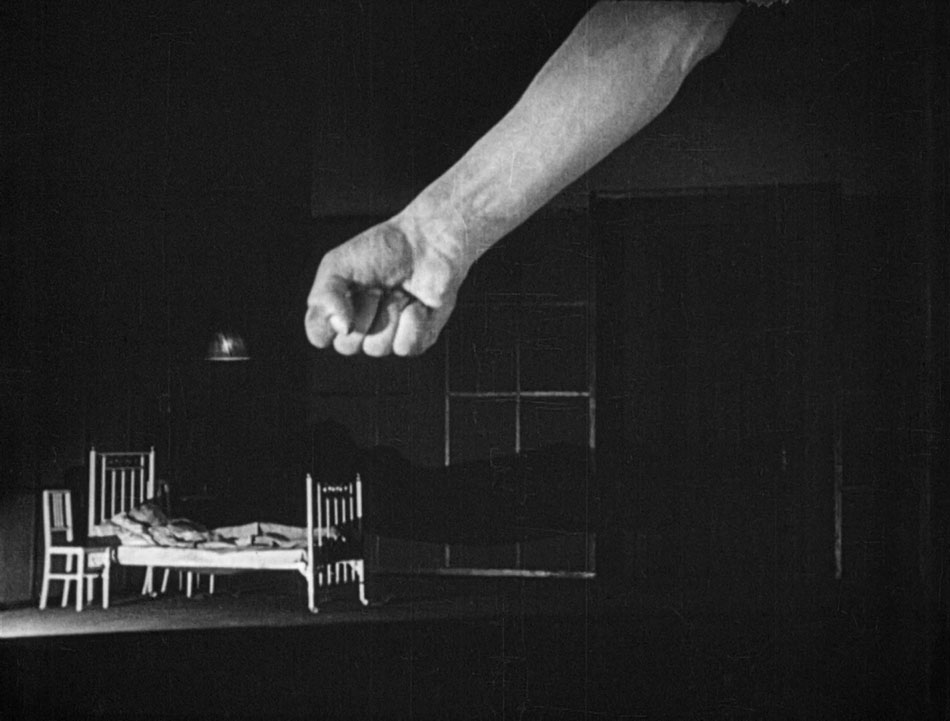 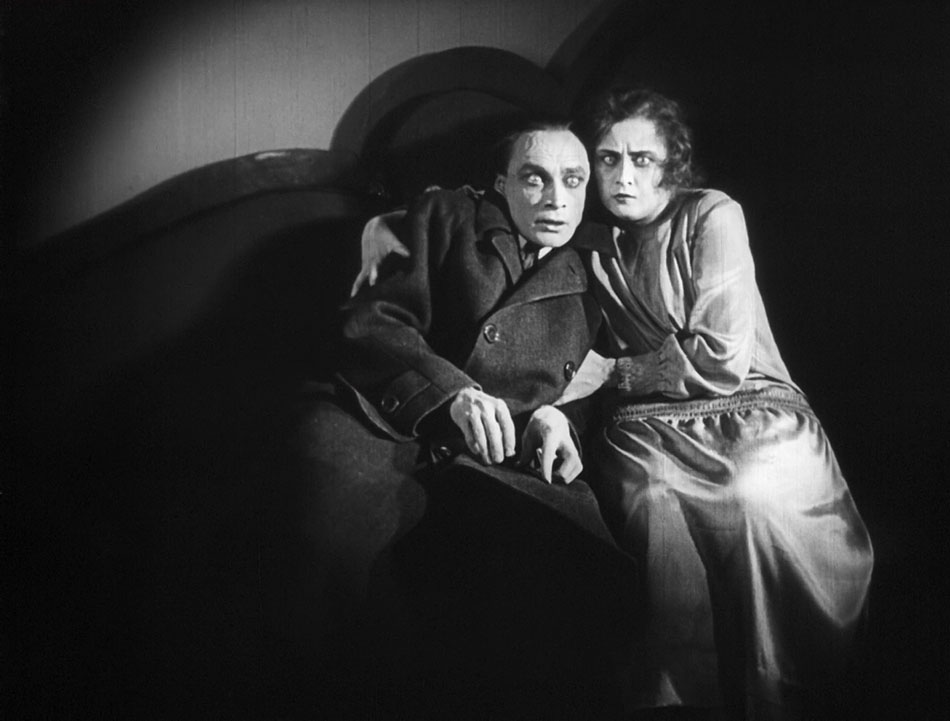 Fat-faced Fritz Kortner (Berlin Express, Pandora’s Box) is the con man. Veidt’s doomed father is Fritz Strassny, villain of The Man Who Laughs – but the 1921 version, of which Veidt’s was a remake. I must now see the Peter Lorre remake Mad Love.

They Might Be Giants “I Left My Body” still has the edge, but this was good too. Told out of order, we see two-handed Naoufel stalking a girl he likes, getting a job with her carpenter uncle and building her a wooden igloo (Neil: “isn’t a wooden igloo just a hut?”). Meanwhile his hand, severed through his incompetence with power saws, can apparently see eyelessly, kill pigeons, and have little hand-flashbacks on its quest to get back to Naoufel. When it arrives, he’s listening to tapes of his dead parents and thinking about jumping off buildings, and the hand wanders off again.

The primary tone is gentle and melancholic – an almost existential evocation of memory, and the longing to be made whole … Just as the themes of I Lost My Body dextrously juggle light and shade, so the film seamlessly blends 2D and 3D-animation techniques with elements of rotoscoped live-action to create what Clapin calls “an animated world halfway between the tangible and the imaginary”.

We saw Clapin’s Skhizein in an animated shorts program a decade ago – can’t remember it well, but it’s also about a guy who lives in two different places at once. The writer worked on my favorite Jean-Pierre Jeunet movies. Played (won!) Cannes Critics’ Week with a bunch of fascinating-looking features that I could spend all week watching, if I could find any of them.

This one has an odd structure, opening with a long scene of Mrs. Bouvier being given limited visitation rights to her son Mouton (“Sheep”) in a lawyer’s office, but she is never seen again.

The main section of the film follows Mouton’s work life as an assistant chef at a seaside restaurant. Long takes, long scenes of daily routine – it’s a Slow Cinema thing – then shorter scenes of the same old thing. Mouton starts dating coworker Audrey, but the movie isn’t giving anyone much of a personality or narrative, just spending time with Mouton and the others. Then after an hour, a narrator appears, and at a festival on the jetty some dude drunkenly attacks Mouton with a chainsaw, cutting his arm off. 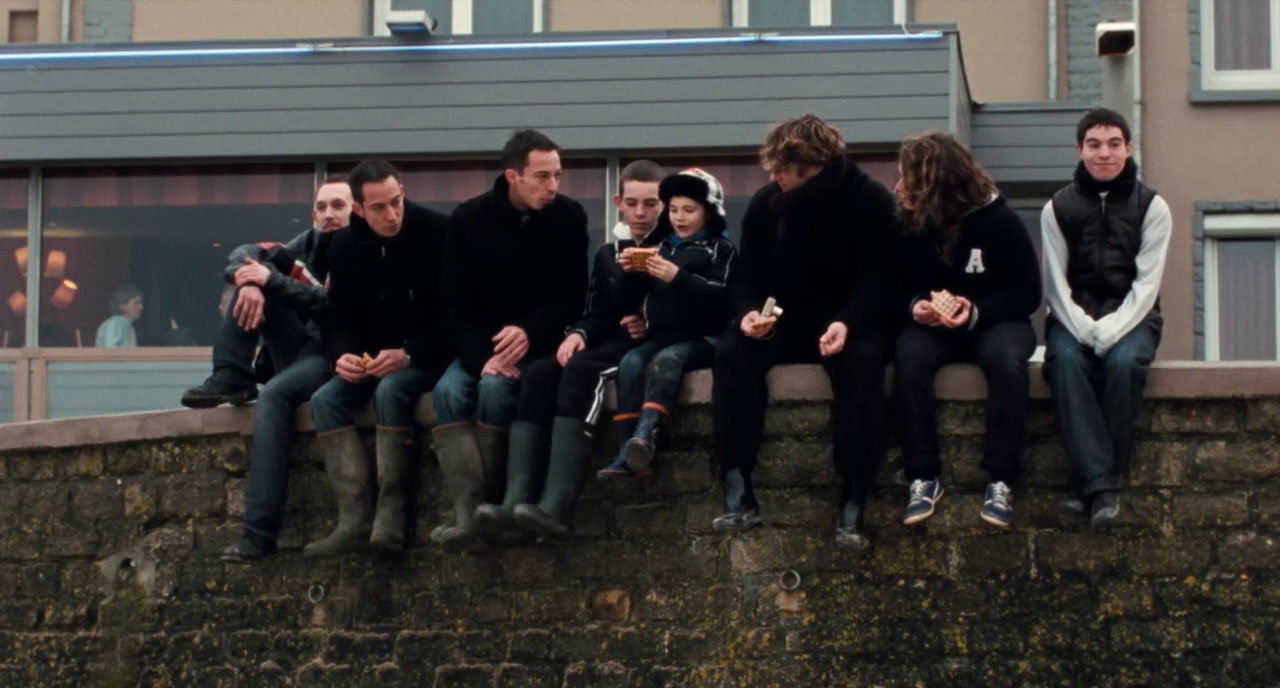 Mouton moves away but the movie stays in the same town (Courseulles, on the north coast just across the bay from Le Havre). His friend Louise works at a butcher, gets married to Mimi, has a kid. They live the rest of their lives, as a title card says. Nothing in the movie is especially interesting, but I do keep pondering its unusual structure. 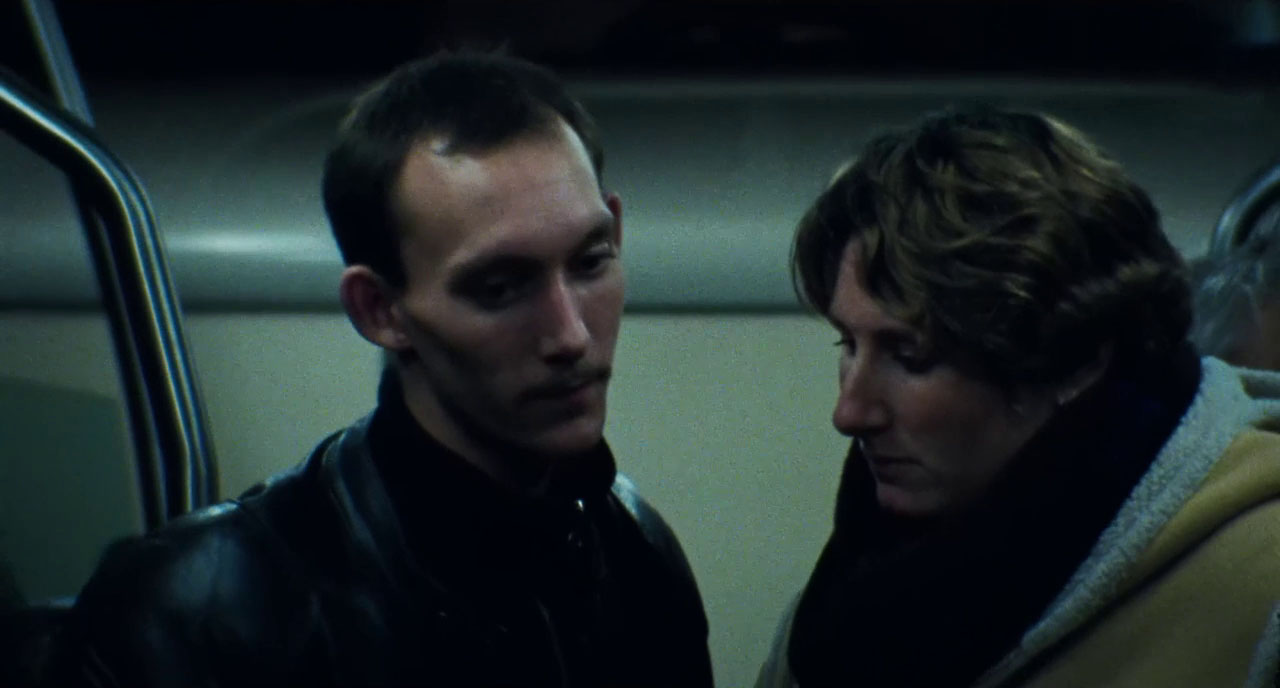 Each scene is invested with an interrogatory naturalism that seems to be imploring just what, exactly, one should be looking for, only to dissolve and leave in its absence the sense that in searching one may be missing the plenitude of the moment. Call it narrative fleecing.
…
“Life goes on, right?” implores Louise, now with child and no time to write to Mouton. It’s a familiarly wistful sentiment, particularly well suited to cinema’s temporal qualities, but rarely explored with such structural audacity and unsensational curiosity as in Mouton. A vague sense of indifference is immanent in our daily lives, however vigilantly we attempt to observe our departed. Mouton, for all its brute realism, is rather forgiving in this regard, locating pockets of grace in the seemingly forgettable gestures that constitute the hours of a day, and the texture of a life.

This would make a good double-feature with Dead Ringers, another 1980’s movie about twin doctors who fall for the same woman. In this one, Oliver and Oswald (twins, separated conjoined, I think Oliver is the blond one) are played by Eric and Brian Oswald (brothers, not twins) – zoologists studying animal behavior when their wives are killed in a car accident while being driven by Alba (Andréa Ferréol of La grande bouffe, The Last Metro, Street of No Return). They become increasingly obsessed with Alba, with each other, and with chaos and decay, freeing zoo animals and shooting time-lapse films of ever-larger dead ones.

These three are surrounded by some suspicious characters: a woman called Venus (Frances Barber of Secret Friends) and a mad surgeon named Van Meegeren, who amputated Alba’s leg after the car crash and now wants to amputate the other leg. She finally turns down the twins in favor of a new man who is also missing his legs – I think she dies at the end but not sure exactly why, and the brothers stage a suicide before the time-lapse camera to add their own decaying images to the collection. 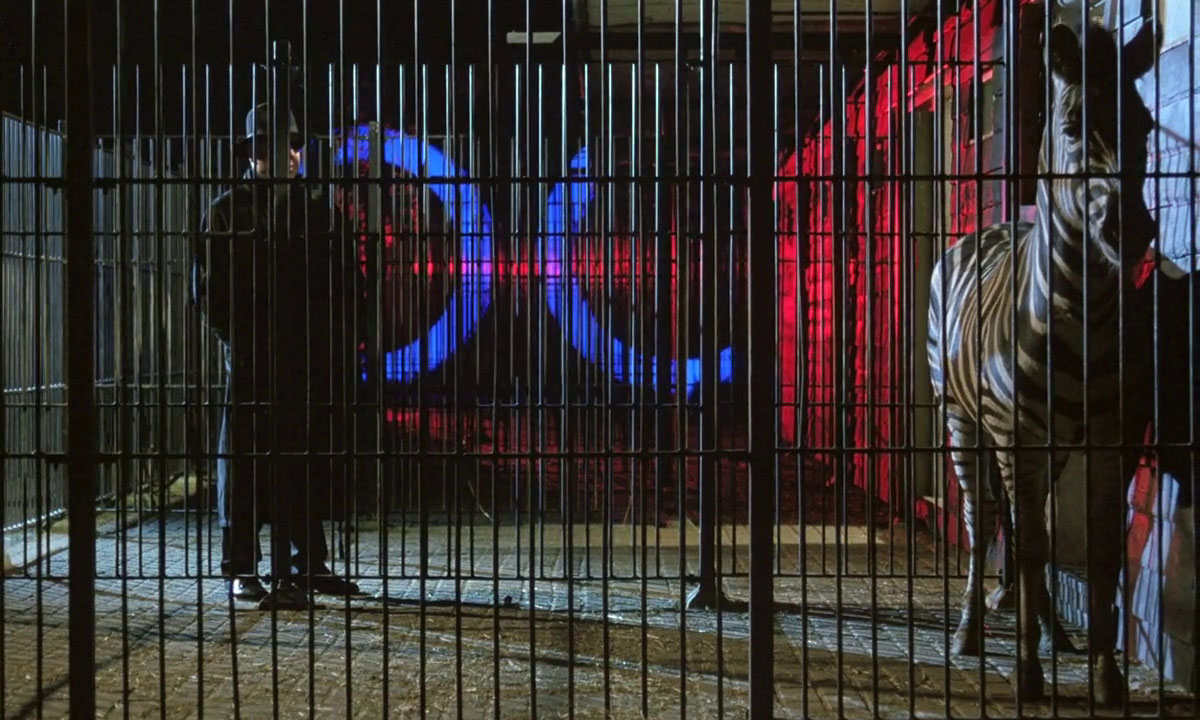 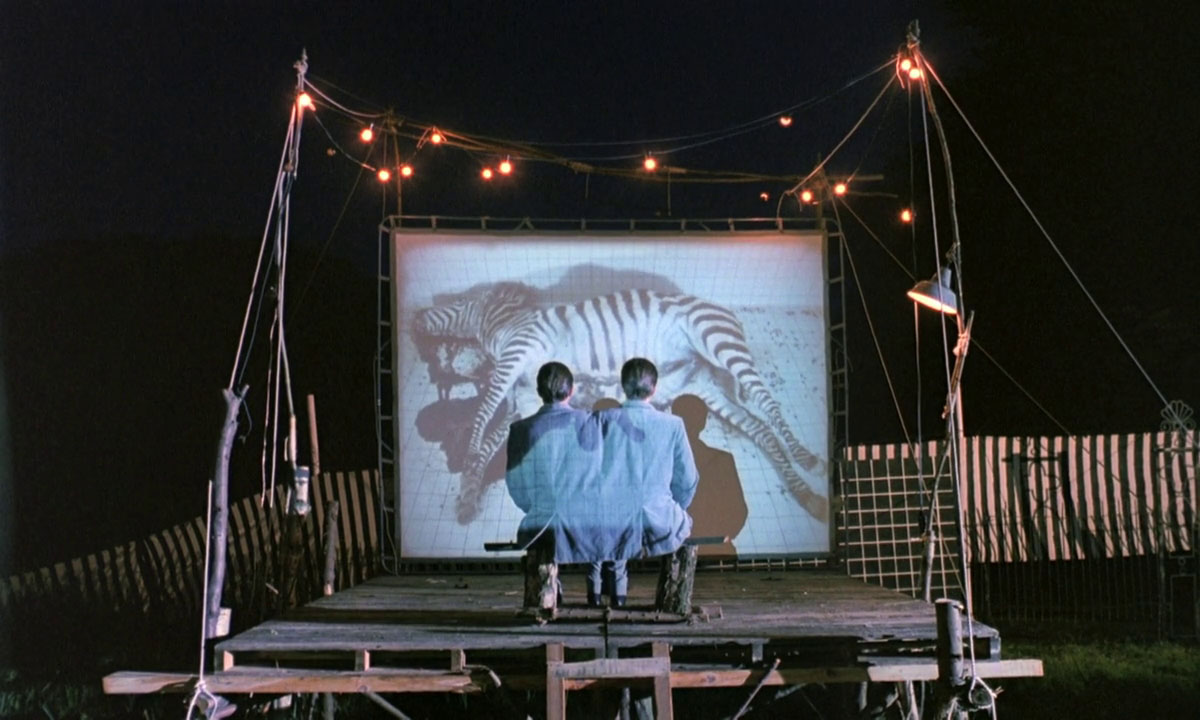 It sounds like a bunch of weirdness from a plot description, but in practice it’s much weirder. Obsessed with Vermeer, decay, snails, symmetry, doubles, the alphabet, fakes and missing limbs – with the great pulsing Nyman music, and always more than one thing happening per shot, each splendidly composed frame full of motion.

Woman returns to Afghanistan to save her suicidal sister, but has trouble finding passage from Iran to Kandahar. Wiki says it’s partly based on true story, and the lead, Nelofer Pazira, played herself – although here she’s called Nafas. She pretends to be part of a large family crossing the border, but they get robbed along the way. She gets a boy called Khak to take her partway, meets an American doctor with a false beard, then tries to follow a wedding party the rest of the way.

Poetic film, sometimes with unconvincing English dialogue but makes up for that with wonderous scenes like the one with guys on crutches racing to catch artificial legs parachuting from above. Makhmalbaf apparently had no trouble finding extras with missing limbs (neither does Jodorowsky). I have a skewed picture of Makhmalbaf – I’ve seen his appearance in Close-Up, a couple of his early documentaries, and a couple by his daughter Samira but this is the first of Mohsen’s features I’ve watched.

Makhmalbaf and his cinematographer, Ebraham Ghafouri, show this desert land as beautiful but remote and forbidding. Roads are tracks from one flat horizon to another. Nafas bounces along in the back of a truck with other women, the burqua amputating her personality.

Fang Kang is a loyal soldier, the lower-class son of a servant who died saving the master’s life. The master takes this seriously, but the younger generation does not, and master’s daughter Pei-er cuts off his arm. A bleeding Kang is rescued by a cute girl called Chiao Chiao who happens to guard a book of secret fighting techniques. He perfects his one-armed swordsmanship, returns in time to save his master from baddies Smiling Tiger (Ti Tang) and Long-Armed Devil (Chih-Ching Yang), who have been easily killing the master’s men by clamping their swords then knifing them with the other arm. Even after the master’s men see how this approach works, they keep getting killed because they have only one fighting tactic. One-arm with his broken sword is immune to the clamp, kicks everyone’s ass then retires with his Chiao.

Lot of people standing still and talking, but some inventive editing (between and within scenes) makes up for that somewhat. IMDB calls star Yu Wang “the first screen hero of modern Chinese cinema” and shows him appearing in seven one-armed movies (including major crossover Zatoichi Meets the One-Armed Swordsman).