Nico cries in the desert with Vest Guy (Daniel Pommereulle of La Collectionneuse), both of them wearing flowy sleeves – this section features a 720-degree slow pan over a Nico song – then she follows and berates him down a white road.

Another Nico song, a good one, kid leads a horse away from a flame circle, Vest Guy gives Nico a small goat, and so on… then Pierre Clémenti arrives nude. He journeys far and long, barefoot across a volcano, to bring gifts to a baby (played by his son) on an iceberg. Nico, practically the only person who speaks (in English and German), calls the nude archer “king.” There’s some kinda final confrontation near a rocky cave involving a sword. It’s all a very different kind of mythology than The Spine of Night, but felt right to be watching these two in the same week.

I can’t tell exactly what it’s supposed to be, perhaps a symbolic arthouse parody/critique of nuclear family life?

Sometimes it seems like psychodrama, sometimes comedy… sometimes we get effectively haunting phantom visuals and sometimes the kid is sitting on a toilet wiping his ass with bible pages.

Lighting can be complex, or scenes can be lit with a single spotlight with inky blackness all around. The actors often look distraught, and the kid spends half the movie crying (and 15 minutes playing with an aerosol can). Their movements can be theatrical, like they’re hitting the marks of a dance routine (in fact, one scene is presented as a stage performance). Camera has some unique methods of moving and reframing to change a scene without cutting, and the kid acknowledges the camera in at least one scene, waving it forward as the family lurches haltingly through a field.

The movie is fully silent, but in accordance with the Director’s Intent (presumably), I played John Zorn’s The Mysteries album followed by the last 20 minutes of Filmworks XXV.

The kid would grow up to be a painter, worked on Genealogies of a Crime, and his dad was an actor, appearing in Truffaut films around this time.

I watched a collection containing roughly half of the Cinetracts, an anonymously-directed series of two-to-five-minute shorts. The first few seemed to be protest-photo montages, and I thought watching a bunch of these in a row would be tiresome so I spaced it out over a few weeks. Some are very different though, telling stories/poems with intertitles or scrawling words directly onto the photos, using different forms of movement and speeds of editing. Some use zooms and dissolves, bringing the photos to life, others are simply long takes of photos interspersed with titles, wordplay, pages from books. 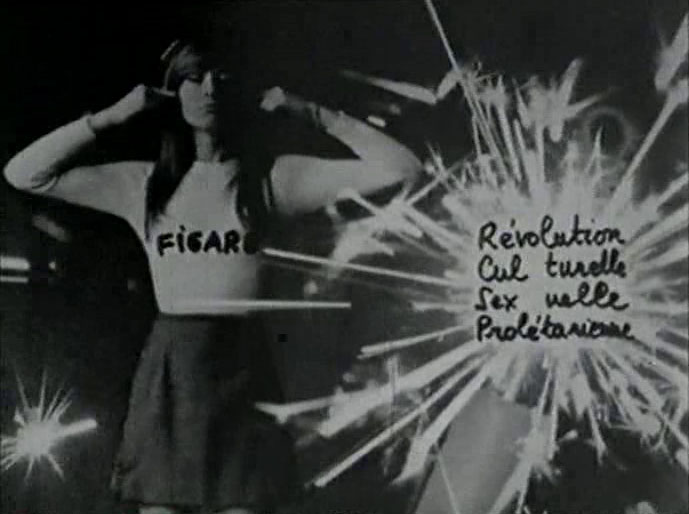 Gary Elshaw has by far the most useful work on the Cinetracts online, even if it’s only about Godard’s contributions.

The purpose of the Ciné-Tracts, as with most of Godard’s 1968 film projects, was to offer a critically alternative source of ‘news’ or information in contrast to the commercially offered mediums available. … The state censorship of the media throughout the events of May necessitated communication along different lines than had existed before.

Other online writing on these tends to focus on determining which ones Godard made (and they can’t seem to agree).

Info dump by a cynical Frenchman who acted as a UN peacekeeper during one of the Yugoslav wars. He speaks rapidly in close-up, with occasional title cards for different topics and cutaways to a photo album.

“When you’re in a country at war, armed, and you have orders not to use weapons, in actual fact you are on the side of the aggressor, the one who’s trying to conquer the land.”

Watched this again with much improved picture quality and English voiceover. Had been burning to see it again since watching Dan Geva’s Description of a Memory. Still great, but I think I prefer Sunday in Peking. Noticed this time when the voiceover said “bar kokhba,” which is apparently not only the name of a John Zorn music project.

I like Louis Garrel, though I’ve only seen him in movies I like less than him (Love Songs, The Dreamers). Loved this one, though – finally everything coming together for both Garrels. Louis is a photographer here, comes to the house of Carole (Laura Smet of Chabrol’s The Bridesmaid) to take pictures, but starts an affair with her instead, while her husband Ed is off making a Hollywood film. They talk more about breaking up than being together, a strange, somewhat obsessive couple.

“Carole’s been institutionalized!”
She turns out to be more than somewhat obsessive, and when she’s getting electroshock therapy I felt stupid for not realizing before that it’s a period piece… after all, it’s in black and white, there are iris-out transitions and film grain galore. But then she dies and her headstone reads 2007 and I feel stupid again.

Louis takes up with a nice new girl named Eve (Clémentine Poidatz of nothing I’ve heard of, but the guy who plays her dad cowrote Wild Reeds). But he’s still haunted by his old girlfriend, and it turns into a bit of a ghost story with great, mournful string and piano music. Awesome cinematography by William Lubtchansky, unexpected camera moves and story twists kept me on edge.

Garrel’s smaller love tale following the epic-intimate May ’68 opus Regular Lovers, asks the filmmaker’s perennial question: how do you reconcile the unchangeable fate of the past with the quotidian sorrows and joy of the present? The answer is impossible, but the way Frontier of Dawn poses the question is frustrating but utterly effective. … Whether the choice of death is the ultimate kind of faith or the weakest of all is not something Frontier of Dawn is powerful enough to answer, but it asks vital, terrifying questions, transposed to a forlorn, gloriously star-crossed romanticism.

Frontier mostly takes place in white-walled limbo, anonymous chic, in which ageless youths spend their days writing love letters, while a gravestone reads 2007 (the ultimate joke) … Frontier is more a psychic porno, a love fantasy one step-up from a sex fantasy, about a relationship that only really works when the lovers are apart and thinking about each other (but works, as it never would in Hitchcock). … neither a visionary nor a realist, he’s no Romantic either: the Romantics locate themselves in what they see around them. Garrel’s characters look inward; nothing goes on around them. That love is the only reason to live is reasonable: Dreyer concluded the same. But Dreyer never said it was a good reason to die.

There are a million conceivable ways to render this material trite, melodramatic, and laughable, but Garrel perfectly brings forth its eerie fatalism and its testament to love’s inextricably deceptive power to destroy. Just as his unshowy camerawork goes unnoticed until a simple pan or zoom calls attention to the carefulness of his compositions and the purpose of any deviations from pragmatic long-take coverage, so do Garrel’s narratives steadily, patiently build on gloom-drenched, picaresque rhythms, revealing an overall design only at the end.

August is 2005 Month! Katy’s not participating in this one because she thinks it’s stupid, so I watched The Regular Lovers by myself. The idea is that I miss lots of really good top-ten-list movies each year, and after three years have gone by, they’re mostly out on video so it’s time to catch up. So sometime next year I’ll have 2006 Month, and so on.

“Have you seen Before the Revolution? You know, by… (stares into camera) BERTOLUCCI?”

Yes, it’s an answer film to B.B.’s The Dreamers from a couple years earlier, which starred Garrel’s son Louis (also of Ma mère and the recent Love Songs). In the Cinema Scope interview, Philippe doesn’t seem angry or bitter over B.B.’s film, nor does he say that Bertolucci told the story wrong and that his is the real story of May ’68. He diplomatically says that there are many stories, and this film is another of them. Philippe also, modestly, doesn’t even take full credit for the final film, calling it a collaboration between himself, Rivette cinematographer William Lubtchansky, and Godard (’64-’67) editor Francoise Collin – “it depended very much on who was most awake at a given morning.” So maybe this isn’t a Bertolucci attack, the historical correction to a previous film that The Lives of Others set out to be.

So did I like it? Not so much. The high-contract black-and-black-and-white cinematography was arresting, and Garrel lives in his scenes and characters for a long time, stretching out moments and silences, which I like, but the movie didn’t grab me. I don’t feel much kinship to the May ’68 obsessives out there. I can sympathize, but I’m worlds away from understanding the feeling, what the kids of Paris thought they were doing and what actually went on. The mood I get from this film and Grin Without a Cat and even The Dreamers is the same kind of thing from the end of Fear & Loathing in Las Vegas, the end-of-the-dream “breaking the wave” speech, only angrier.

Lead characters are named Francois and Antoine – couldn’t be in reference to Truffaut & Doinel, could it? Reviewers insist this movie is a French New Wave homage, but it doesn’t feel like anything actually released in the early 60’s. A doomed, doomed feeling pervades, especially in the second half. The first half I was having trouble telling all the young male characters apart, but that’s okay because there wasn’t much Story, only Revolution – the fighting in the streets eaten up by the total blackness on the edge of the frame, the blackness finally taking over in the occasional iris-out (another cool camera trick: twice you see flashes as they shot to the very end of a film reel). The second half is a doomed, doomed love story, with Francois finally left behind by his sculptor girl (Clotilde Hesme, also in Love Songs) and killing himself with pills, his dead body discovered by cops in the final shot, cops he’s spent the rest of the movie running from (when he wasn’t smoking opium at home with his buddies).

Other differences from the Bertolucci film: no sex onscreen (nothing more than kissing), no talk of cinema (other than the mention of B.B. himself). The stylistic bits (the photography, iris tricks and intertitles, bursts of piano music, a loud dance scene) don’t seem to be trying to make the movie stand out, make it self-consciously weird or interesting, which is good because today (the year of The Wackness) it takes much more to make a movie seem weird. Rather these quirks seem to fit in quite naturally. It’s getting strong comparisons to The Devil, Probably, another film I didn’t much understand. Part of this is my fault – I didn’t pay as much attention as I could’ve during the first half, and I watched it on DVD where it’s clearly a Theatrical Experience movie. Maybe I’ll try again sometime, or just skip back to another Garrel movie.