The duck season/rabbit season short in which Daffy gets blown to bits a hundred times and Bugs causes chaos and confusion. Murderous fun. “I hope I didn’t hurt you too much when I killed you.” IMDB calls it the end of a Hunting Trilogy with Rabbit Fire and Rabbit Seasoning. 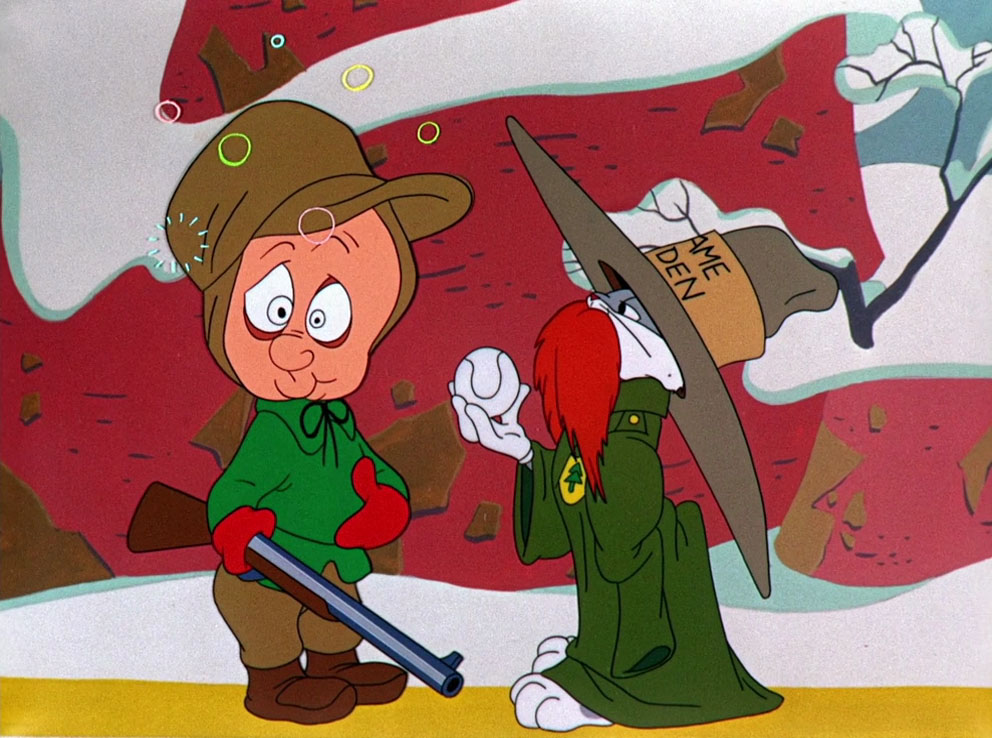 “Enough is too much! Out of my house!” Forgot that Owl Jolson’s parents have heavy German accents… also forgot an excellent scene combining telegram lingo with sexual harassment. 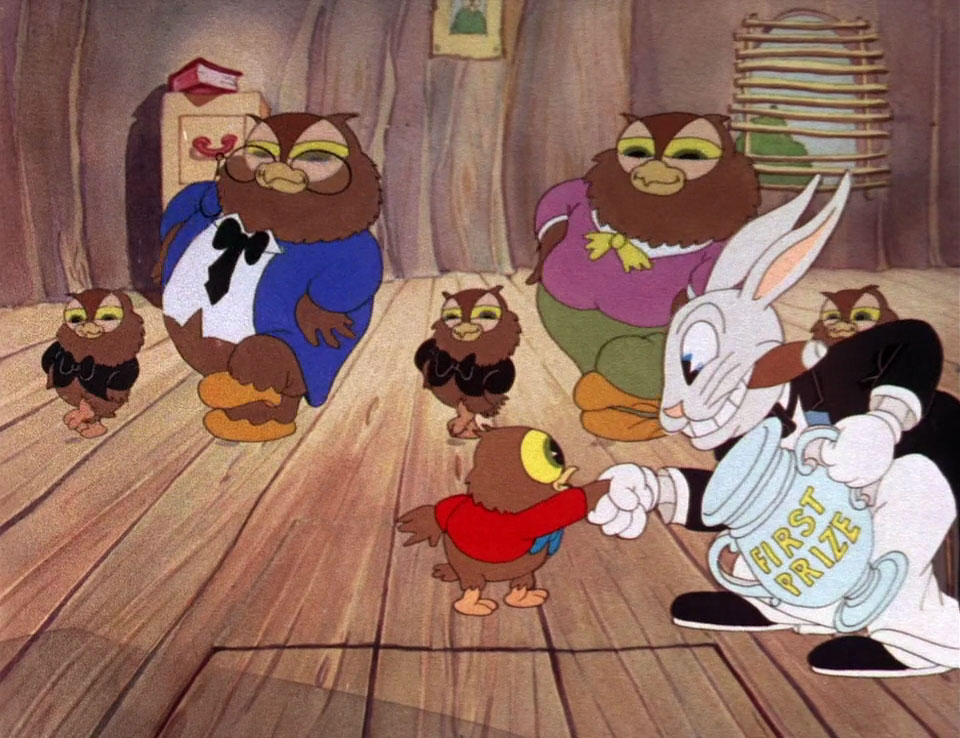 Abbot & Costello cats try to steal a pink, featherless, smartass bird from its nest. Very quippy and gaggy, only loosely a story. Explicit Hays Office reference! “Lemme at him Babbit, I’ll moydalize him.” Pre-Tweety premiere of “I tawt I taw a putty tat”? 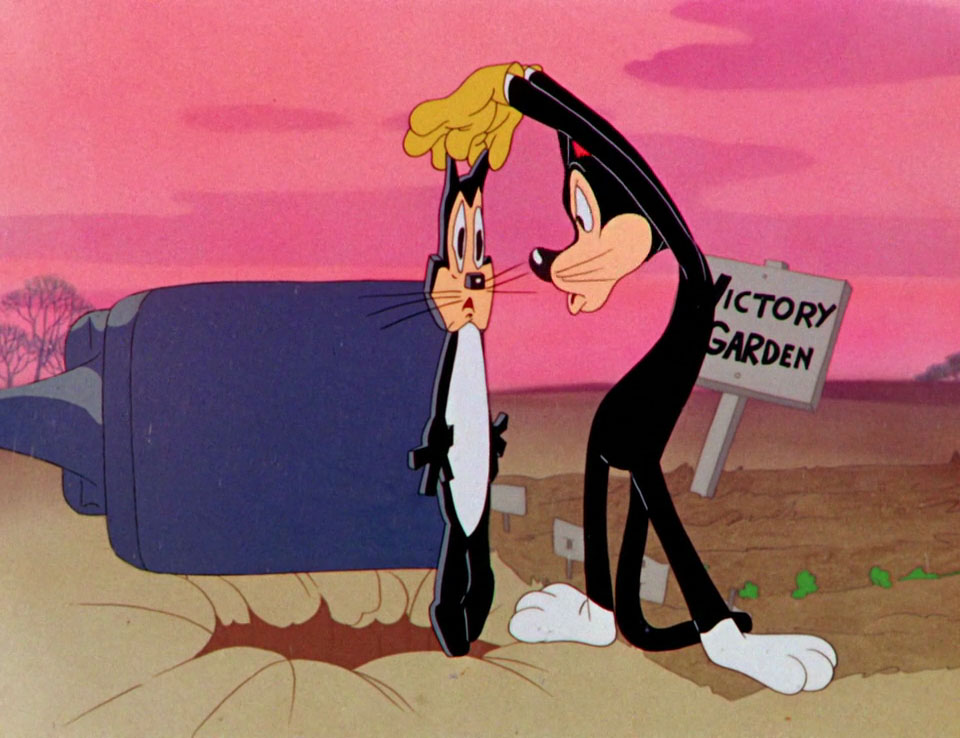 God listens to Elmer for some reason, and sends him to the year 2000, which has futuristic weapons and newspapers full of 1940’s references. Then we get a flashback within the flash-forward, so both elderly and baby versions of Elmer & Bugs. 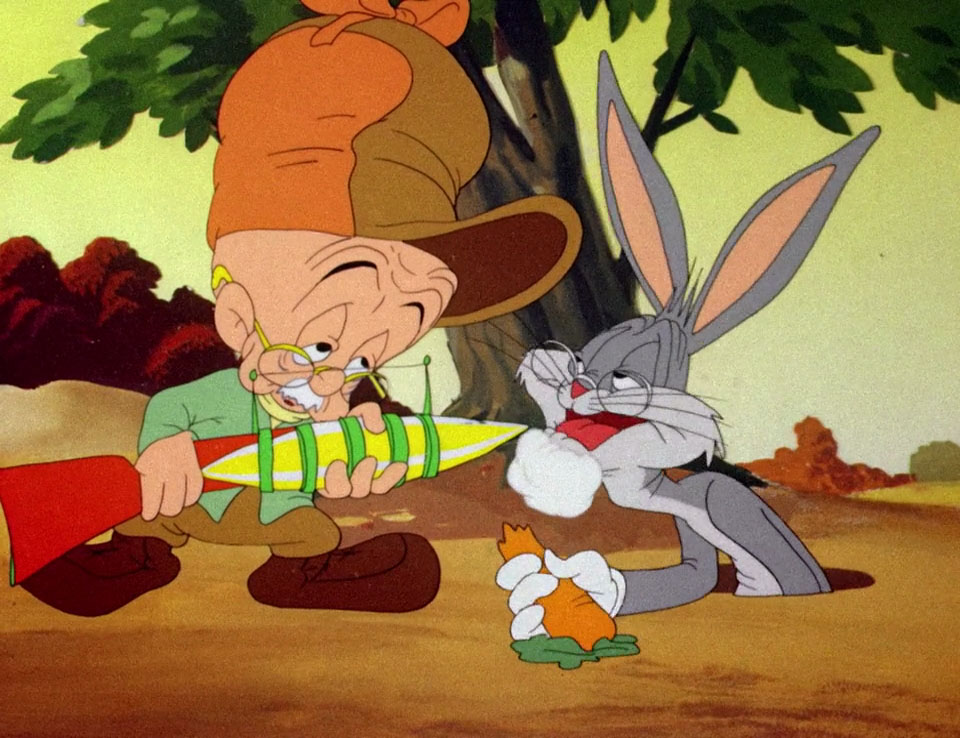 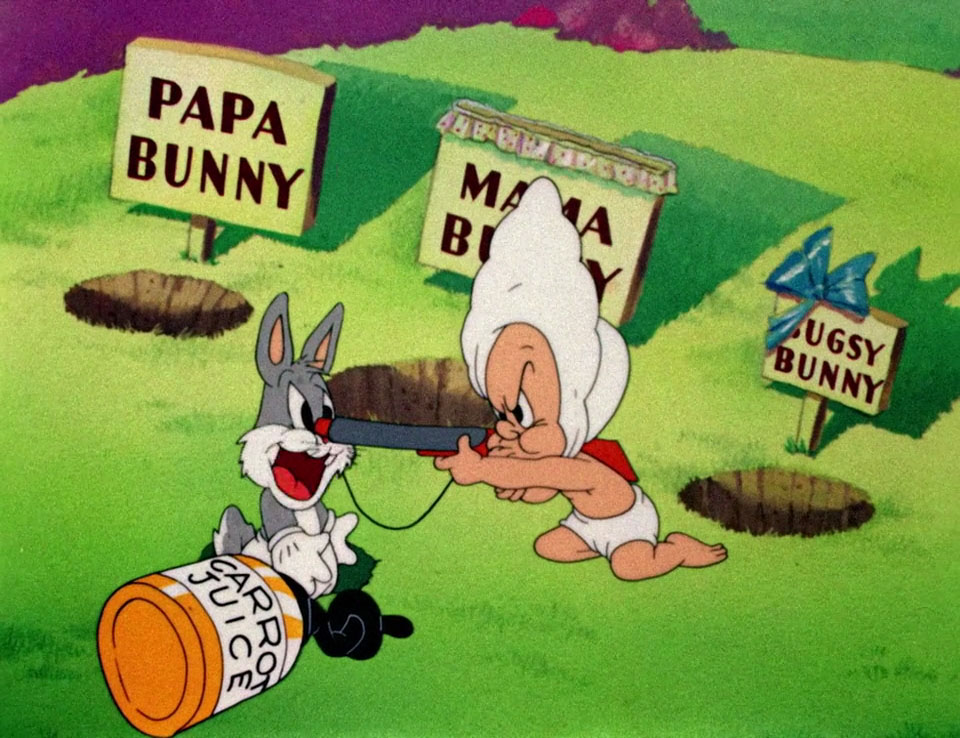 In which Bugs convinces Elmer that he’s caught Rabbititis. I thought this was an old-model Elmer, but it’s made a year after the modern-Elmer Old Grey Hare, so what’s going on? The Elmer-torture is prompted not by hunting this time but by Elmer trying to buy fresh rabbit at the meat market, which at least proves that he intends to eat rabbits and isn’t just hunting them for the sport of it. 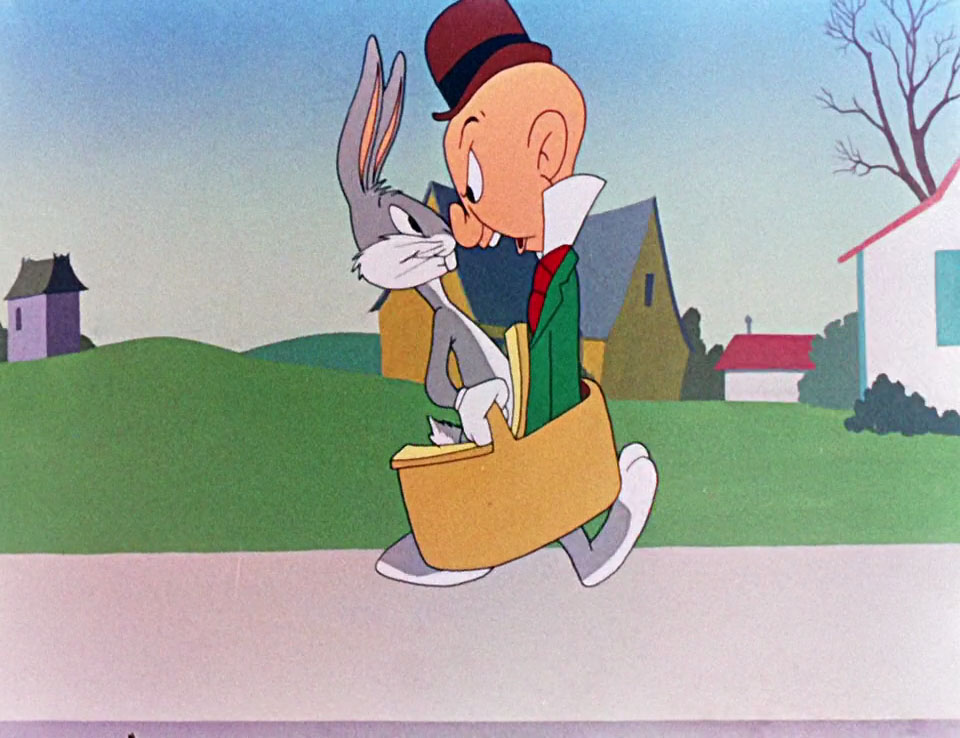 Coyote and Road Runner origin story, setting up the template for many to come – and arguably never surpassed. I like that Road Runner doesn’t just zoom past the traps, but actively fucks with the coyote. I also like that there are complicated cloverleaf interchanges in the middle of the desert. My birds responded to the “meep meep” 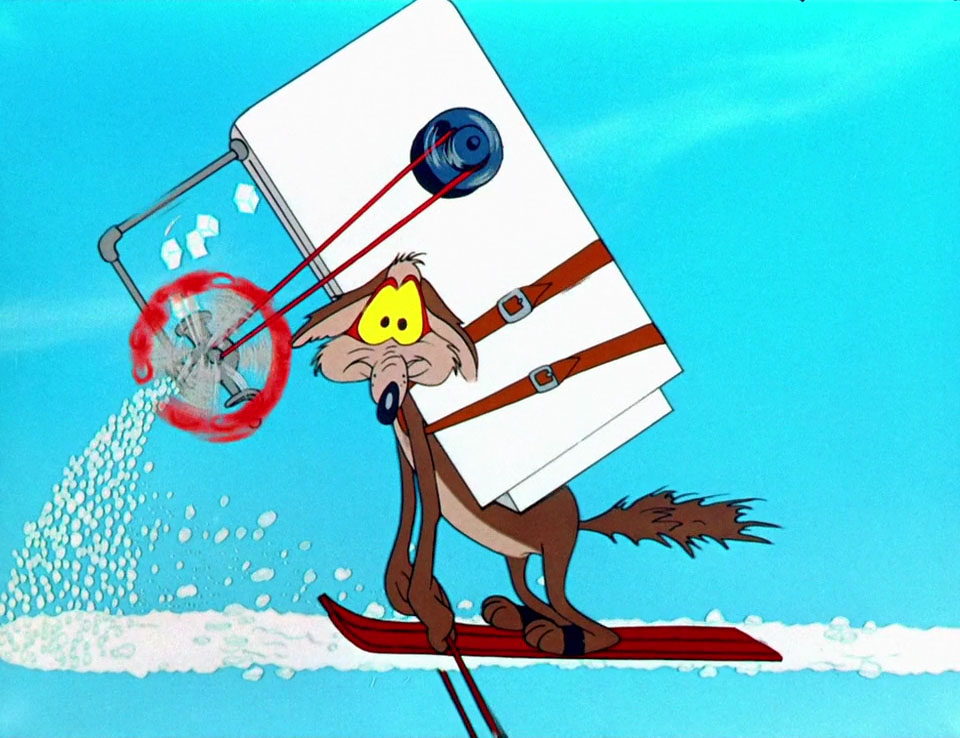 Daffy begs his movie producer J.L. to give him a dramatic role for once, which is enacted by an all-star cast: Porky, Sylvester, Elmer, Chicken Hawk. Rated R for snuff usage and suicide. 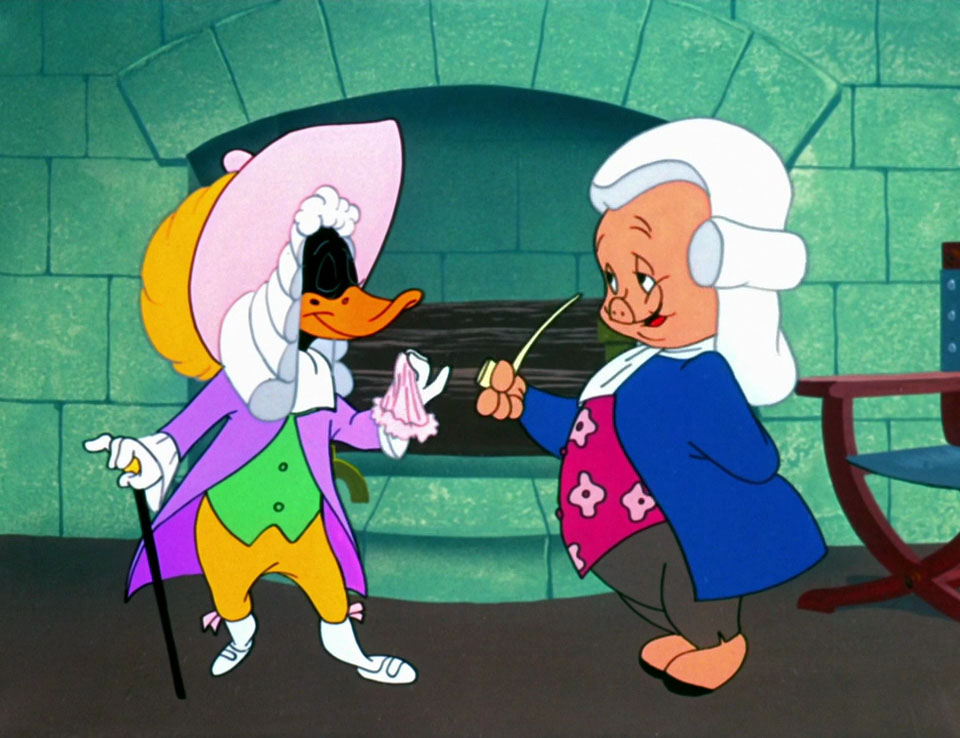 Red kitty has a whole string of “owners”, who all feed him, but the food is stolen by a bully dog, who finally overeats his way into the hospital. 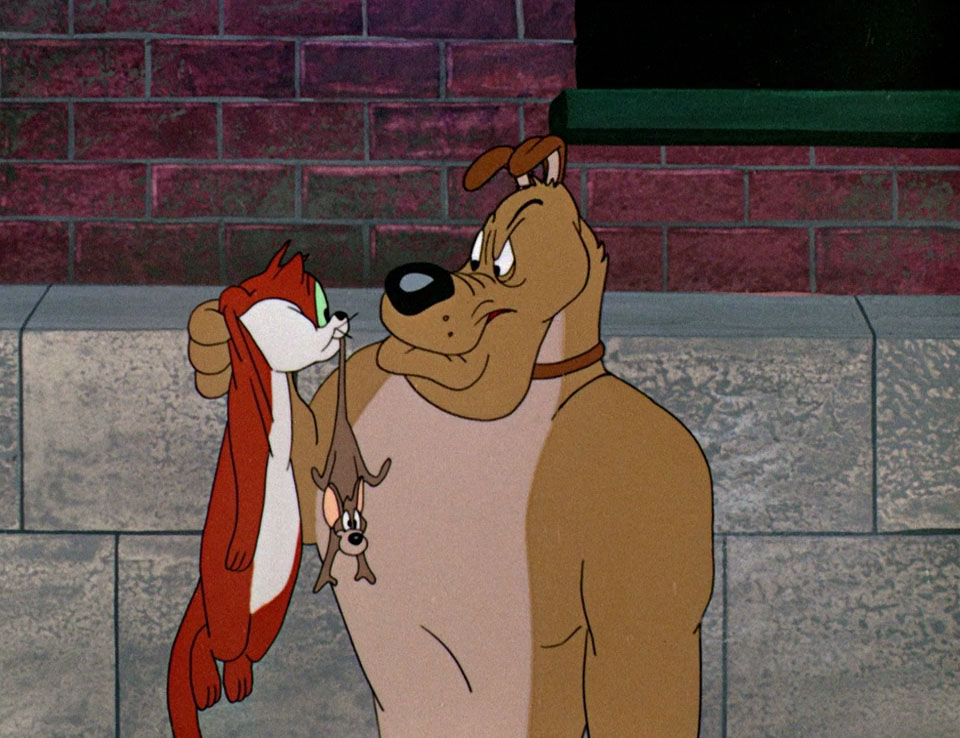 Bugs is reading Hansel and Gretel when he runs into the kids themselves, with ridiculous German accents, and ends up being chased by the witch through her hilariously designed house, and nearly saved by Prince Charming, who got the wrong fairy tale. “Thanks large, mac.” Ends with maybe the rudest punchline ever. 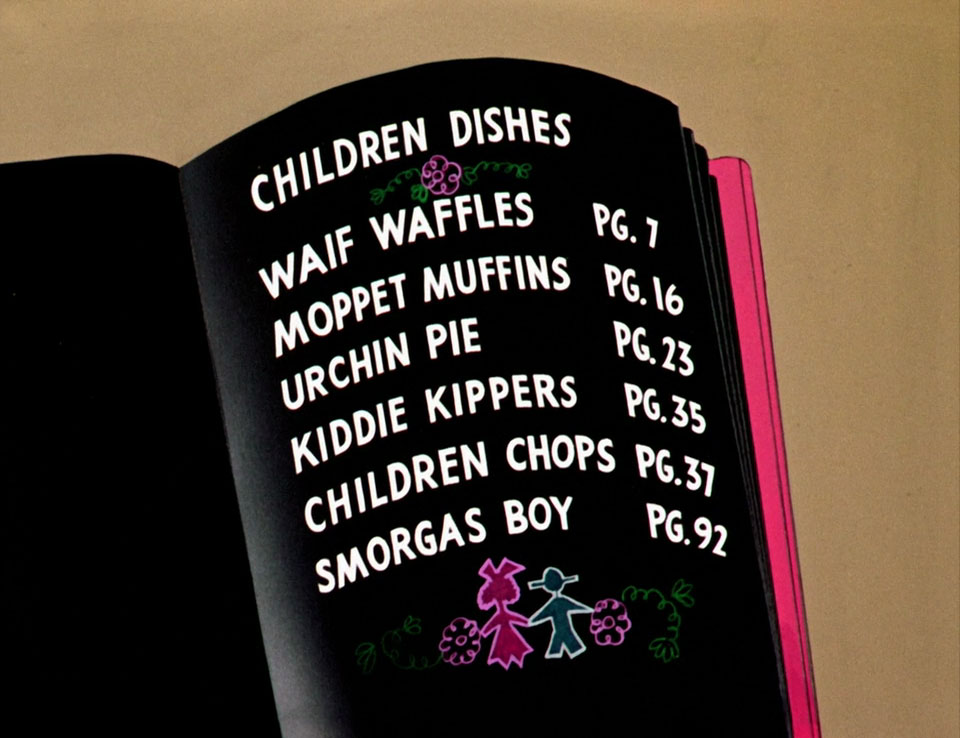 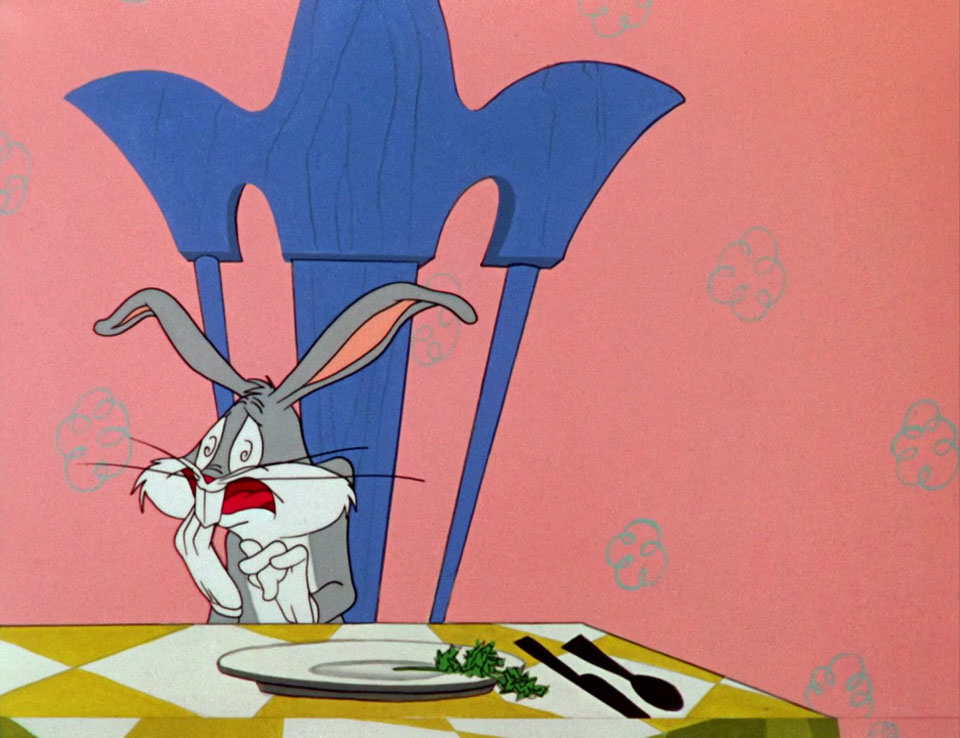 More 16mm screenings from Clay, Halloween-themed this time. Clay showing seasonal shorts reminds me of Robyn Hitchcock’s halloween show where he joked that since he’s only playing songs about ghosts and death, nearly half his catalog is disqualified.

The Skeleton Dance (1929, Walt Disney) was the first in the Silly Symphonies series, with good music-visual sync, but too much repeated animation. No spoken/sung dialogue, wordless skeletons playing in a cemetery until the sun comes up.

Runaway Brain (1995, Chris Bailey) is an excellent, fast-paced Mickey Mouse short with a mad scientist voiced by Kelsey Grammer, beaten for an academy award by Wallace and Gromit. Seems like nobody around me had heard of this before.

The Tell-Tale Heart (1953, Ted Parmelee), animated with some abstract imagery, overlapping shots and sharply-drawn characters. Has a deservedly high reputation, but beaten for an oscar by Disney’s Toot Whistle Plunk and Boom.

Betty Boop’s Hallowe’en Party (1933, Dave Fleischer) – always great to see a Betty short. Her party is pretty tame – kids bobbing for apples and singing like the birdies sing (tweet, tweet tweet) – until a bully shows up and she attacks him with her secret cache of ghostly evils. Full of amazing animation and visual ideas, beautifully synched to the music. I gotta get me a whole pile of these cartoons someday. I asked Wikipedia when the apostrophe disappeared from “hallowe’en” but it didn’t know.

Naturally the show was also full of TV episodes and classic commercials – Count Chocula vs. Franken Berry, of course, also a kids vehicle that looks suspiciously like the Wacky Wheel Action Bike (“you can’t ride it! you can’t ride it!”) and an awesome PSA warning kids to stay away from blasting caps.

Of the TV shows, we’ve got a Popeye the Sailor episode where an evil robot-popeye robs banks, the adventures of Goodie the Gremlin, who helps people invent the steam engine, airplanes etc. instead of tormenting people like the other gremlins want, a Spider-man episode where Green Goblin gets his hands on a book of voodoo spells, and a hilarious, surreal episode of Ultraman (featuring benign fluffy chattering Pigmon monster in a recording studio, giant plumed lizard monster with heat-seeking feather missiles, and the usual bonkers dialogue). Then the lower-tier corny garbage shows: a cartoon Sinbad the sailor, some dimwit monster who shoots smoke out of his head, Beany and Cecil meet the invisible man (1962, produced by a post-Warners Bob Clampett) and a Hal Seeger-created short called Batfink, in which BF and his dim pal Karate fight a magician.

Another great set of Clay’s 16mm cartoons, and it’s been too long since the last one.

Mysterious Mose (1930, Dave Fleischer) is a proto-Betty Boop (she looks like a dog; a sexy dog) cartoon in which she is haunted by a sorta ghost casanova. The Great Piggy Bank Robbery (1946, Robert Clampett) is a weirdly violent Daffy Duck gangster parody. Since his “Duck Twacy” fantasy is spurred by a knock on the head while reading comic books, it’d be a good short to play before Artists & Models. It’s Tough to Be a Bird (1969, Ward Kimball) is a Disney doc about birds and watchers with musical cartoon segments. And We Have Met the Enemy, and He Is Us (1973, Walt Kelly) is an unfinished Pogo cartoon with a harsh environmental message. I think all the voices were done by one guy.

Bunch of TV stuff. Spiderman fights a bank robber in a mole-man costume. There’s a Casper cartoon (in which Casper does not appear) about a watch repairman who gets attacked by an eagle at the end. Ralph Bakshi contributes an episode of Captain America. A horrible show called Hoppity Hooper (set in Wisconsin) with a Rocky-and-Bullwinkle-repetitive bit about “the traffic zone” was the low point. The high point was the hilarious 60’s-70’s commercials for Mr. Wizard, Hot Wheels, Cheerios and the like. Real fun program… too bad the next one is scheduled for the same night Art Brut is playing. 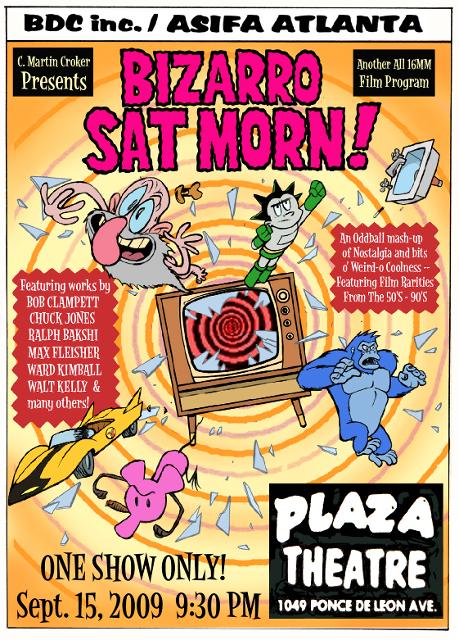