A really lighthearted spy romp, in which forced-into-retirement secret agent Walter Matthau spends some time with his girl Glenda Jackson (of a string of Ken Russell movies) and decides to write a tell-all book about the agency while his former bosses, led by humorless Ned Beatty (con man Hoover in Wise Blood), try to locate and possibly kill him. In typical PG-rated 1980’s style, Ned fails and is repeatedly humiliated, and Matthau (who proves himself awful at accents, languages and disguises) escapes detection despite having a bestselling book with his picture on the cover.

KGB Chief Herbert Lom (known for the Pink Panther series) joins in the chase towards the end, along with sympathetic CIA guy Sam Waterston (simultaneously of Heaven’s Gate). Matthau rents his ex-boss’s house in Adairsville GA (wooo!) and arranges to have it destroyed. There are some plots that rely on perfect timing and coincidence, as in all spy movies, but it’s a well-meaning little movie, so I was rooting for it.

Alec Guinness, a few years after The Ladykillers, plays dedicated painter Gulley Jimson, introduced getting out of prison and shooing off devoted fan Nosey. Jimson is a gruff-voiced wreck, living on a leaky boat at the docks, spending his days at the bar run by Cokie (Kay Walsh, Guinness’s costar in Oliver Twist and Last Holiday) or harassing a man who owns some of his work (Ernest Thesiger of The Old Dark House in one of his final roles) until he can afford enough paint to create more. 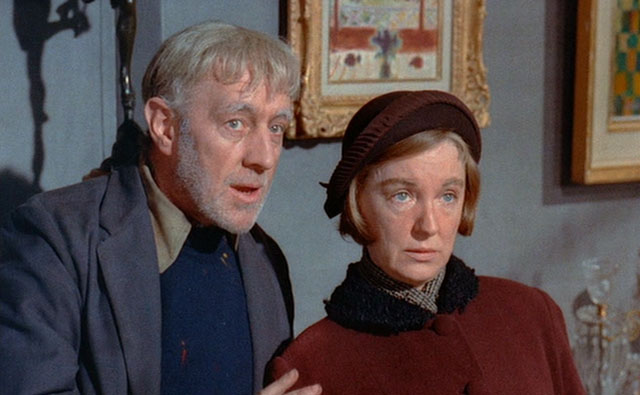 “Of course you want to be an artist. Everybody does once, but they get over it, like measles and chicken pox.” Jimson compares his artistic drive to a sickness – more like a drug addiction, taking down everyone around him in his weird quest to create (and sometimes destroy) new works. He finds a rich holidaying couple interested in art and installs himself in their apartment, selling their furniture to buy paints and food, as a similarly obsessed sculptor (Michael Gough, of Horror of Dracula the same year) takes the apartment below. Then he orchestrates a huge wall painting using art students to finish on schedule before the wall is to be demolished, and finally collapses it himself as the students clash with the construction crew. 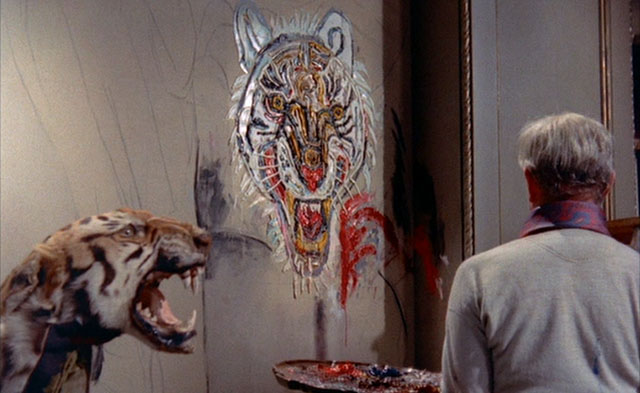 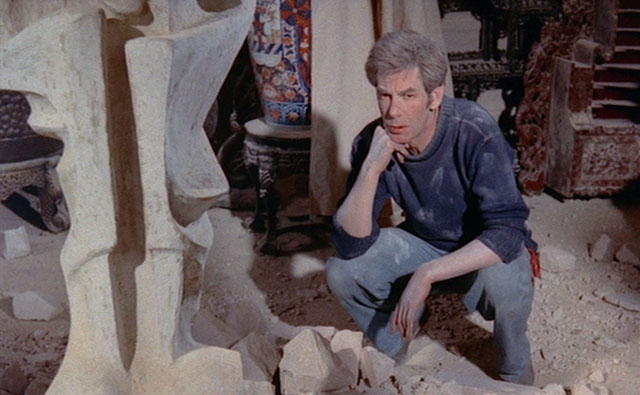 The author gave his beloved creation a Catch-22 ending – Jimson escapes, sailing out of the harbor, contemplating new works on ever-larger canvasses.

I noticed an awkwardly dubbed line in the apartments, and even figured out that the sculptor was originally telling Nosey to “drop dead”. IMDB says the actor playing Nosey did drop dead a few days after shooting, hence the line change.

Film Quarterly liked it: “Guinness’ screenplay and performance amount to a rare comic achievement that speaks of serious things from behind surface flippancies and outrageous hokum.”

“Do you think that we Hollanders who threw the sea out of our country will let the Germans have it? Better the sea.”

Pressburger’s first producer/director credit after a decade of writing in the movies – including Powell’s 49th Parallel, The Spy In Black and Contraband. Shot by Ronald Neame and edited (as was 49th Parallel) by David Lean. Early on were some wondrous airborne shots of the city below lit up by bombs and anti-aircraft fire – I couldn’t tell if it was stock footage or superior special effects. 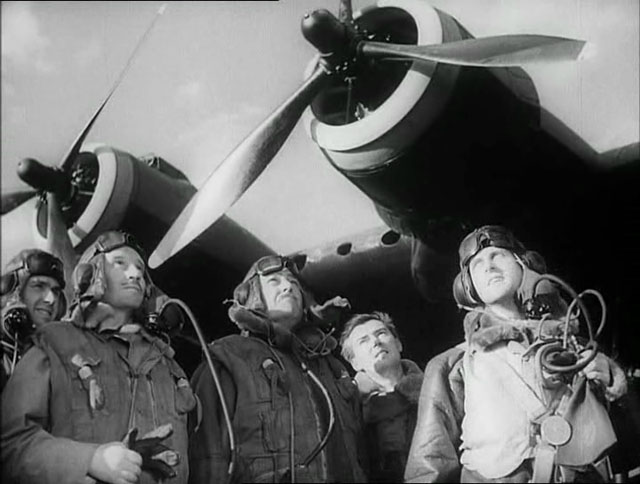 A pip of a war thriller, more exciting than 49th Parallel. After a British bomber is shot down over Holland, the soldiers (who all parachuted to safety) have to find their stray comrade, contact the resistance and make their way to the border, nearly getting caught a bunch of times. 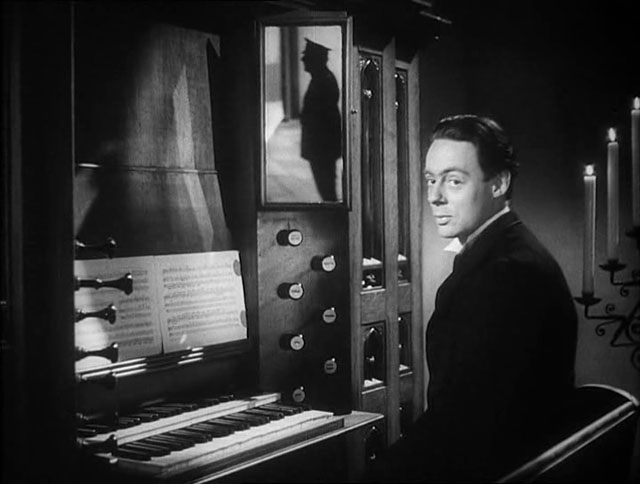 Sure, all the guys have different jobs and hobbies and personalities, but the movie is pretty story-driven, so I didn’t get strong enough individual impressions to tell them all apart and remember who was who – figuring most of this out from IMDB. Older guy George, rear gunner, was the villain in The 39 Steps. I recognized Eric Portman from A Canterbury Tale. Hugh Williams (who later starred in Pressburger’s solo film Twice Upon a Time) was an actor in civilian life, so gets dressed as a woman when they hide out in church with the villagers. Front gunner Bernard Miles was in The Man Who Knew Too Much remake. Pilot Hugh Burden played in Ghost Ship and Blood from the Mummy’s Tomb, and Emrys Jones (the stray Bob, a soccer player) appeared in The Small Back Room.

The bailed-out men are found immediately by children who report them to Pamela Brown (I Know Where I’m Going, Tales of Hoffmann). She surprisingly makes them prove their identities to make sure they’re not nazi spies trying to entrap the resistance leaders, then smuggles them (via the costumes and the church) on to priest Peter Ustinov (voice of Prince John) then on to Googie Withers (of Night and the City) who gets them to a boat at great personal risk – in fact, I’m not sure how she gets out alive at the end. Somewhere along the way they come across Bob at a soccer game, natch, and Ustinov squares off against nazi sympathizer Robert Helpmann (Red Shoes, Tales of Hoffmann). During their boat escape, one (George?) is shot, but in the epilogue they’re all alive, well and flying missions again – target: Berlin.

Also watched:
An Airman’s Letter to His Mother (1941, Michael Powell)

…which was exactly that – a letter written to be delivered in case of his death, then delivered when he died. One of those super-patriotic messages, which was published in all the papers and filmed by Powell, I guess in order to reach cinemagoers who don’t read the papers. 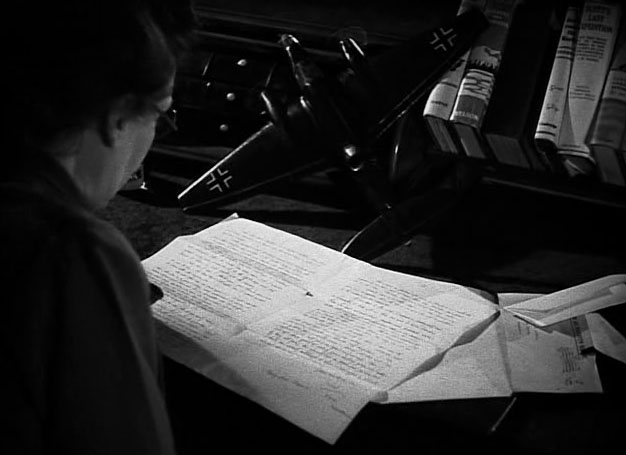 A British comedy starring stiff, beefy American Gregory Peck (Robert Osbourne explained that American actors could reap tax benefits from working abroad a few months a year), based on a Mark Twain story, an early film work by the man who would become the Criterion-celebrated director of Hopscotch and other films I know nothing about.

Penniless Peck is given the titular note by two hyper-rich pranksters (IMDB says that in 2002 dollars, we’re talking about a hundred million bucks) who have a bet that he can/can’t live for a month solely on the appearance of wealth without ever cashing the check (or, presumably, getting a job). Peck hires a mute weightlifter to help him out, gets some suits and a swanky hotel, and falls for a young noblewoman (Jane Griffiths, of not much else). A few close calls and but Peck makes it through the month and presumably gets the job (worth somewhat less than a hundred million bucks) and the girl.