Lovely event by The Ross. Went out to dinner with director and cinematographer, and it occurred to me towards the end to feel guilty to be celebrating with the filmmakers of a documentary I’m probably not going to like. Docs about artists tend not to be very artistic themselves, and talking-head interview movies seem pointless to watch in theaters. So I was expecting another Altman, but this doc was great. Yvonne had a fascinating life, and the movie does a good job following it, showing groovy clips of dance routines and films, and not playing the “then this happened, then that happened” narrator games. Yvonne had breast cancer and got a mastectomy, then would stand in classic shirtless male-model poses. Later in the Q&A someone asked if she had breast cancer and I thought “of course she did,” but I guess the movie didn’t explicitly state this, just expected you to follow the stories. This counted as the U.S. theatrical premiere – that’s for a regular week-long release, since it played festivals already.

To prep for the Yvonne doc, I watched most of this TV special, in which the great Robert Gardner interviews Yvonne about her film Kristina Talking Pictures, showing about a half hour of it. Local film critic Deac Rossell joined the conversation, and the two men seemed very anxious to talk about film technique, leaving Yvonne to mostly smile in the background – a shame, since I watched this to hear what she’d have to say. I was most uninterested in the film itself at first, with its typically dry, amateur acting, but then I started to notice the unconvincing actors were discussing unconvincing acting in films, and towards the end of the episode the clips played with sync sound in a cool way. So I still haven’t seen a full Yvonne Rainer film, but I know a lot more about her.

Much more breathing room in the interview than in the Hubley episode, and Frampton, as always, is great fun to listen to. He discusses getting to know Ezra Pound and experiencing his Cantos (a difficult, book-length piece of modernist poetry full of obscure references), which sound like they could easily have influenced HF’s work, but sadly his story gets cut off to show Maxwell’s Demon, then Surface Tension (minus the first part, the man with a clock), accompanied by good descriptions. Frampton tries to explain exactly what kind of filmmaker he is, and they struggle into a very good HF intro to Lemon (excerpted on the Criterion disc), then they do an honest-to-god audio commentary over the silent film. Some talk of Frampton’s work as a professor then an excerpt from Critical Mass.

Oooh, haven’t seen this one appear anywhere else. Footage from the New York State Fair, the “stripper” tent lit by strobes, then a little girl dancing in a different area. HF shoots the dancers, but also the strobes, a crack in the tent where someone peers through, and a fishtank, all accompanied by another HF/RG commentary.

Description found online: “An analysis of film’s persistent relationship to sexuality, mediated by allusions to early cinema’s flicker, and other aggressive qualities of the cinematic apparatus.”

“This is probably something that will never transpire,” HF says about the final form of Magellan – sadly, he was right. He discusses his plan for Magellan, thoughts on sound vs. silent film, and shows a collection of “Lumiere Bits,” what Criterion calls the Pans, short for the Panopticons. Somewhere there’s a program called Straights of Magellan: Drafts and Fragments collecting 49 of these. Of the kid with the frog, “this is my one-minute horror movie.” There’s also a cat toying with captured bird, 3D pattern on a sidewalk, saw cutting wood, a few more.

HF, interviewed elsewhere about these: “A catalogue or compilation of films which were limited to exactly one minute – 1440 frames. They were to be an homage not so much to the early cinema of the Lumieres as to an aspect of film that I feel has been lost.”

At a certain point, what has tended to happen previously happened again: I set out to make a simple inventory or catalogue of the appearances of the world, which I imagined might run to a few hundred short films, but as I actually began to gather these film segments they began to organise themselves – to my discomfiture – in a manner that I suppose is determined by my own immersion in montage: one thing suggests another, and if you have five things there seems to be some best order in which they should be seen. The bits of film, which were as opaque as an isolated word, seemed somehow to be demanding a more intricate organisation than I had originally planned. At first I thought that simply meant sorting them into more intricate categories; I had originally imagined that there would be four categories – ‘ordinary, extraordinary, exotic, and erotic views’ – which were the categories used by the Lumieres. So I attempted a more complex sorting, which led to the question of an equilibrium among the categories … What basically evolved from that proposed inventory – or catalogue, or storehouse – is a work whose working title is currently Magellan. This is composed of parts, not all of which consist of one-minute segments, not by any means. It’s not a work that can be diagrammed in linear fashion, since it uses the grid – among many others – of the cycle of the solar year. In other words, it’s a calendar. That is to say, it rotates like a wheel, or rather like a series of wheels that rotate within one another. I now expect, when and if the whole thing is completed, that it will be, very roughly, thirty-six hours long. Within those thirty-six hours there are a series of rough categories – well, the categories are actually quite exact, but they name parts that overlap each other on a kind of twodimensional map of the work. Those categories are ‘Straits’ and ‘Clouds’ [of Magellan], and there’s a section which corresponds to a ‘Birth of Magellan’ (itself comprised of subsections), and there’s another which relates to adolescence. Then there’s a ‘Death’ and even, heaven help us, a ‘Resurrection’.

A large amount of black, with quick single-frame bursts of a color wash, a shape, or a colored shape. Gets boring pretty quickly. I played Mogwai’s You’re Lionel Richie which didn’t work at all. Frampton says “it was made in abject (if blissful) ignorance of Paul Sharits’ early work.”

Watched again with William Tyler’s Terrace of the Leper King after fixing an interlacing issue. Much better! The film still lasts twice as long as it is interesting, but I enjoy the anticipation/response of each burst of colors and shapes.

Watched with Yo La Tengo’s Ashes on the Ground, very enjoyable. A study of shifting lighting, motion and focus effects on layered fence patterns, pretty simple as far as HF films go. Internet doesn’t mention the identity of the patient man behind the fences, but I don’t think it’s Michael Snow. 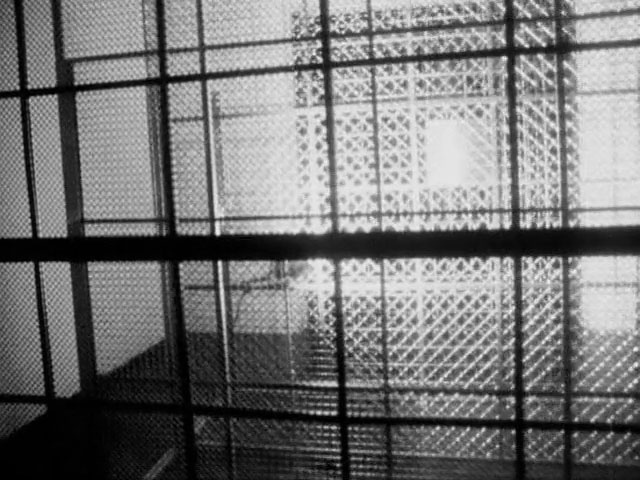 A minute-long scene of some artist-types chatting around a table, with cuts and dissolves, ending with a zoom into a photo of the moon. But this is repeated twenty times, each with a different variation. Once their faces are whited-out, once the picture flickers on and off, sometimes they’re colored or processed in different ways, flipped upside down and run in reverse. Quite an amusing movie. Apparently it was Frampton’s entry point from typical 1960’s avant-garde into structural films – and only a year later he’d put out Zorns Lemma.

Music played: Ennio Morricone – Music For Cinema: The Complete Edition, disc 4, though only track 6 really worked with the movie.

Colored circles, reminding me of searchlights across a chain link fence, and sometimes of the MasterCard logo. Music played: “Stalker Dub” from John Zorn’s Nosferatu, which worked nicely. Intended for day two of Magellan.

Watched on Frampton’s 77th birthday. Shot in a slaughterhouse, but not terribly comparable to Blood of the Beast, since HF shoots everything too close with his trademark jittery camera movements. I wish there’d been fewer tongues and eyeballs, but it was mostly bearable, more textural than representational. Still, a motherfucker of a film, very red and gloopy and horrible. Music played: Autechre’s Exai tracks 10-13, which worked well, so I’m glad I resisted the urge to play Ty Segall’s Slaughterhouse.

I got a collection of the Screening Room series, in which Robert Gardner (a great filmmaker himself) interviews creators of avant-garde, animated and short films and shows their work. The plan is to watch some of these and supplement them with other shorts by the filmmakers. In the Hubleys’ case I’ve got plenty, since I bought all their DVDs when they were in print – probably watched most of the films a decade ago but now I can’t remember one from the other, so need to see again. Since I already had all these movies (except possibly Children of the Sun) I would’ve appreciated more time spent in conversation with Gardner, but when this aired I’m sure it was more important to show the work itself.

Birth and Death share a car, drive through civilization debating (over)population. Then Quetzalcoatl shows up and sends them both to a new planet, announcing that the old one is on its own. The dialogue recording is a little too beatnik, but it’s a nice film, good one to start the program. John mentions to Garner that an advantage of animation is being able to tackle huge social issues in the abstract.

One of my favorites, with Dizzy Gillespie and Dudley Moore as two border guards riffing on the idea of war and artificial boundaries after one drops his hat onto the wrong side of the line.

I also flipped through their book adaptation of The Hat, an attempt to turn the rambling dialogue into written form (with illustrations)… doesn’t seem to have worked as well.

Child play and fantasies (accurate to a fault), ending with a weird string-music motion child collage.

Opening narrator sounds like WC Fields. An illustrated speech given by Robert Maynard Hutchins about Freud student Dr. Zuckerkandl, who is animated as a tiny man with an amusing accent. Mostly I distracted myself watching him and thinking about animation and missed the part where he’s supposed to be the father of modern times. Oh nevermind, internet says it’s a fiction/parody of psychology, which I suppose accounts for all the laughter during Hutchins’ speech. Regardless, another weird choice for an animated film.

The cutest of their children-voices movies that I’ve seen – Mark and Hampy dig a hole, lay bait (candy) and set a trap to catch the elusive moonbird. Won the oscar over a Speedy Gonzalez, a biblical Disney and an Ernest Pintoff musical short.

Fun, visually exciting short about how aging crushes your imagination and sense of fun – but with a happy ending.

Another favorite. A farmer is startled by a giant, resource-scarfing mobile city that steals his fruits and spits out canned fruit. Entranced by the music of the city (a nice jazz score by Benny Carter) he drops everything and runs after it. Presented by the National Housing Agency of Canada.

Educational short about geology. Adam is going to the store for milk when he falls deep into the earth’s crust. Guided by a talking rock (Jack Warden, the president in Being There) he learns about quakes, salt, stalactites, different kinds of rock, fossils, volcanoes. Songs ensue, including “So Sedimentary,” which Dump has covered. Blacklisted actor Morris Carnovsky protects “the tomb of the earth,” through which they go back through prehistoric eras. Finally Jack returns to his mom (Maureen Stapleton, Emma Goldman in Reds) with his new pet rock (and no milk).