“I’m exhausted, I can’t remember who’s alive and who isn’t.”

Following The Road Movie, here’s another Russian dark comedy with segments that went over my head (because I didn’t try very hard to keep track who was who). The first thing I noticed is that this is a real movie, with a proper script and professional-looking camerawork and editing. I point this out because In The Loop felt like a big-screen version of a Thick of It (or Parks & Rec, etc.) episode, loose mobile cameras, cutting only for laughs and covering (sometimes badly) for dubbed lines and alt takes. Now that we get what I’ve been craving, an Iannucci movie with proper lighting and fancy sets, I guess I’ll take the In The Loop version after all. Great performances in both, but if that fake-documentary style is what’s needed to keep the comedy sharp and constant, then so be it. 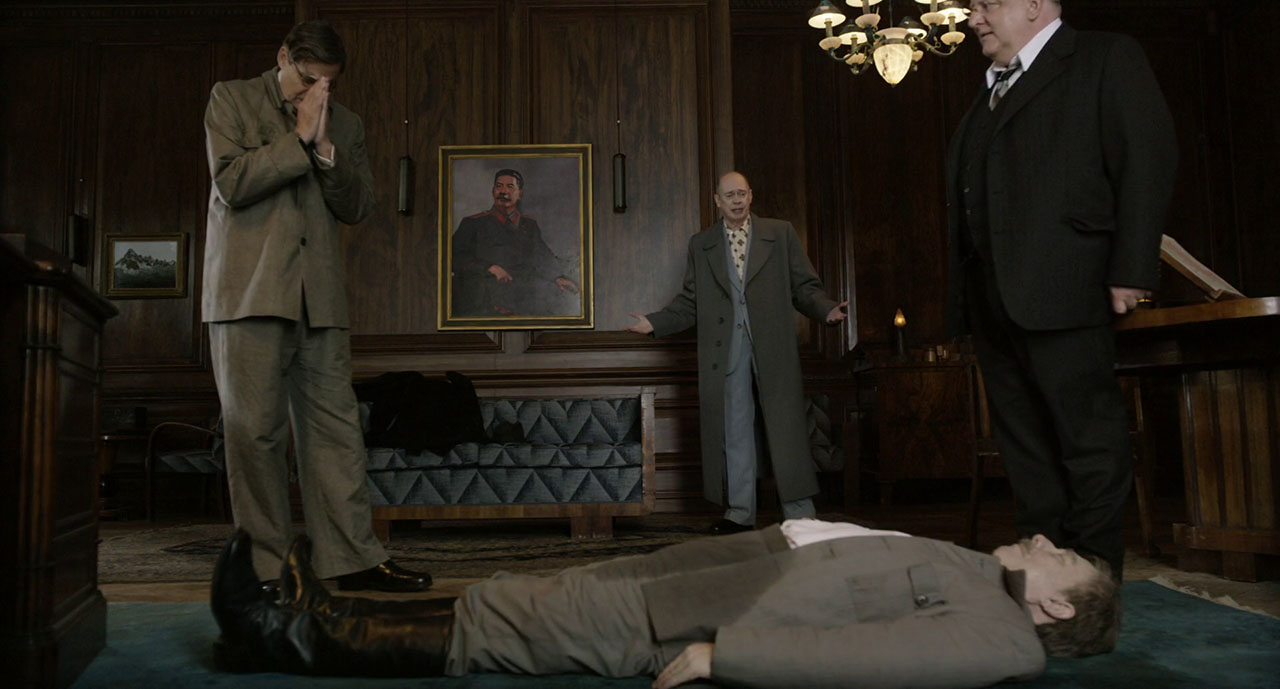 This still might end up being the funniest movie of the year, with ringers Michael Palin, Steve Buscemi and Jeffrey Tambor as members of Stalin’s inner circle who start jockeying for position the moment their feared leader has fallen, having choked while laughing at hate mail sent by musician Olga Kurylenko (To The Wonder). The ringers are joined by Paul Whitehouse of The Fast Show, army leader Zhokov (Jason Isaacs of the first Resident Evil), Simon Beale (Rachel Weisz’s older husband in The Deep Blue Sea) and some others, and eventually Stalin’s idiot son Rupert Friend (Homeland) and daughter Andrea Riseborough (who also costarred with Olga K. in Oblivion).

I’m not gonna recount every humiliation and double-cross (though Beale does end up dead and on fire) because that’ll take some of the fun out of watching this again in a few years. The blatant criminal behavior by weak-minded, disloyal men in high government offices didn’t remind me of anything in particular, no sir, just a bit of fun.

Loyally following the director’s intent, I watched this on an iPod. Seven episodes, supposedly released over seven days, but I started on day eight and watched at my own pace. Supposedly a fat young boy “blogger” is backstage at a fashion show watching events unfold over seven days, editing together segments from single-take interviews with participants backstage. Some of the performances are very fun to watch – especially Jude Law as a diva cross-dressing model who keeps dropping his fake accent. I’m happy to play along, expecting, if not a new favorite film along the lines of Yes and Orlando, at least a smart, good time. In the first place it seems a bad sign that she’s written a takedown of the fashion industry. I’ve seen enough Project Runway to know there’s no need.

The movie is supposedly being made on an intern’s camera phone and these actors embody characters eager to share their experiences about the bitter, hypocritical world of fashion. Does that sound remotely interesting to you? Not at all, I’ll bet, because you’re already way ahead of the movie—we know inherently that the fashion world is superficial, and having a gallery of famous personalities line up and preach to the art house converted is nobody’s idea of a good time.

Sorry, Kipp, but halfway through I realized the movie isn’t a fashion attack at all. It’s something worse – a woman my mom’s age coming to terms with the power of the internet. The fun performances start getting watered down by hysterical ones. Increasingly ludicrous plot developments undermine the movie’s believability, and it devolves into the kind of camp I’d feared it would be when I first heard the premise.

Funnily enough, I never thought of it as a film about the fashion industry. I thought of it as a film about people who happen to be in that setting. But as a filmmaker, what’s interesting about it is that it’s a world dedicated to appearances. But what the story’s about is what lies behind appearances, the tension between what you see and the reality underneath. It’s not really about fashion so much as about industry in crisis and individuals becoming unmasked … and finally, the gradual dawning realization that the person in the room with power is the youngest one, because he understands this new age of information on the Internet.

So our blogger Michelangelo (never seen or heard) watches as fabulous designer Merlin (Simon Abkarian: “He” in Yes) launches his new fashion line with models Jude Law, Lily Cole (The Imaginarium of Doctor Parnassus), and at least two others unseen. Also at the company are serious Bob Balaban (Christopher Guest regular, the film critic in Lady in the Water), “invisible” hispanic worker Adriana Barraza (the medium in Drag Me To Hell), and Dianne Wiest (recently of Synecdoche New York but I remember her best from Edward Scissorhands) as a manager who yearns for the old times when everyone knew everyone and all manufacturing wasn’t done in China.

Highlights of the movie are the interviews with jaded critic Judi Dench, wiry war photographer Steve Buscemi, fashion mogul Eddie Izzard, and his nervous caffeine-addicted bodyguard John Leguizamo. Lily Cole and pizza delivery-man-turned-fashion runway motorcyclist Riz Ahmed (of Dead Set) have the only semi-interesting character developments (Cole flees the scene and stays at Michelangelo’s house – a sweet ending, and the only non-bluescreen shot)

Not faring too well: Swedish Ben Affleck-lookalike Jakob Cedergren and Last King of Scotland vet David Oyelowo as an ineffectual Shakespeare-quoting cop, both of whom act angry at Michelangelo towards the end yelling at him to stop filming, while they stand in front of his bluescreen and look into the camera.

A model dies in the runway, her long scarf caught in Riz’s motorcycle wheel and the company decides to hold another show two days later, in which another model is shot to death. By that time the movie’s plot has already become way suspect, and the themes of fame and success, image and the power of the internet have reared their ugly heads. Apparently guns were handed to all the models as part of the show, and the audience was overrun with kids attracted by Michelangelo’s blog videos and I’m not sure what happened then, but people start yelling into his camera that Mich is the one with all the power here because he controls their images’ distribution over the rabble-rousing internet. Adriana cries that she is no longer invisible, D. Wiest joins the protesters against her own company, and nobody thinks to slap Mich upside the head, take away his camera and remove him from the premises. Maybe it’s more of an interesting concept and performance piece than a finished product, but it got my strict attention and I’m still very interested in Potter and whatever’s on her mind, so I went quote-hunting.

Potter defies the digital era’s fascination with new technology by emphasizing its limitations. … Her video technique doesn’t substitute for cinematic variety or photochemical richness. Instead, strict adherence to the basic things that digital media record (a face, place, moment) helps to appreciate the difference between video and film. Eschewing the lazy carelessness of so many misguided digital enthusiasts, Potter’s rigor becomes a refreshing reminder of true cinematic values.

The novelty turn is Jude Law cross-dressing as supermodel Minx, sporting a series of preposterous wigs and an intermittent Russian accent (is Minx from Minsk?). All flirty grandeur (“Are you shy because I am celebrity, yes?”), it’s Law’s most theatrical screen performance yet, but it’s perfect here, both a larky send-up of his own beauty and a comment on the catwalk model as imaginary woman. But the people most redolent of the flesh-and-blood humanity that fashion operates to obscure are Steve Buscemi and British model Lily Cole. … As a purely plastic creation, an unusually sensuous essay in cinema povera, Rage is oddly compelling, a genuine one-off.

The sketch-like focus on dialogue and characterization, as opposed to plot or mise-en-scene, is clearly the most logical direction for the burgeoning online/mobile entertainment movement, where grandiose visual concepts are dwarfed into 3.5 horizontal inches and uninspired set pieces are scrubbed ahead with the flick of a pinky. The advantage of Rage is its stylistic redundancy and still-life portraiture feel; one could pause the film at any time to check their email and return without having severed the narrative flow. The disadvantage is that the movie’s serenely glabrous surface lacks dynamism: Aside from the colored backgrounds that match each respective character’s eyes, garments, and/or hair, there are no visual indicators of plot development or tension, which lends itself to 98 minutes of occasionally soporific sameness. … While the stark visual formalism of the experiment is ideal for shrunken PDA and laptop screens, the monochromatic backgrounds and crystalline digital sheen seem borrowed from online commercials. Mute the sound, and you’ve got an adequately produced Apple ad.

Rage has made itself noteworthy as the latest effort of a name filmmaker to address … the fact that cinema, as it’s traditionally made and consumed, is being starved by digital culture. Everyone knows the drill – movies, TV, music, newspapers, publishing, etc. are all dying pig-stuck deaths because of the internet, although no one dares to say that the internet is, in fact, the problem, and increases its dominance at a very real and looming set of costs to us all. … The film’s proud artifice rubs the mock-doc set-up the wrong way if you’re keeping score, except that “fashion” is all about the dishonesty of surfaces, and Potter’s film seems to be less about its subject and story than about how to make movies with as little as possible (another Warhol principle) and conform them to the new digital world. (In an interview in the latest Sight & Sound, she calls it “survivalist filmmaking, a no-waste aesthetic.”)

I think there is a deeper feel of rage, a kind of quiet rage on a mass scale and not knowing where to focus this rage which is the negative end of globalization. The positive end is the internet in my view, but the negative end which is about greater and greater ownership by anonymous corporate entities and less and less about freedom for the individual.

It is making some headway because when I first started there were no women in the context where I was working. And that was a very lonely place, and I’ve watched that shift gradually. People used to come up to me in all parts of the world and said oh I loved The Piano and I said no that was Jane (Campion). And she and I would meet up now and then at festivals and she would say that people keep telling me they love Orlando and I’d say yes, sorry. So it was as if there were two of us in a sort of vaguely conspicuous, visible place in the pantheon of directors and that’s changed surely.

Happy 10th anniversary to the funniest comedy of the 90’s!

In honor of this anniversary, I intended to post pictures of Jeff Bridges’ smiling eyes, but the DVD crashes my VLC player on both computers, so I will abandon this post before I am tempted to start quoting lines.

Should this really be compared to Ghost World, which was a whole different kind of movie? Sure, why not. Both try to mix humor with failure and both have Steve Buscemi in ’em.

Art Con is disillusioned with the art-school crowd and has nothing nice to say about the students, their teachers, rich successful artists, or lonely bitter failures. Pretty harsh outlook (but of course). A few interesting bits – our kid being more accepted as a famous serial killer (not “innocent” since he did burn down an apartment building, killing many) than he ever would’ve been as an artist, and the “outsider artist” cop being celebrated for making daringly crappy paintings. Kind of an easy-target comedy, like Best In Show, but meaner. Angelica Huston didn’t have much to do. Katy didn’t seem too enthused.