Picked a nice, short, famous one for my first Raoul Ruiz movie. Based on a fictional painter (I didn’t know until I looked it up). The curator studies “a collection of paintings by Tonnerre, a French academic painter of the mid-nineteenth century, whose rather undistinguished works, with no consistency in style or subject matter, are said to have provoked a major but mysterious society scandal”. The title is misleading, because the supposedly missing painting is not discussed so much, but rather how the paintings are connected and what scandal they could have caused. Turns out the characters within may be enacting the rituals of a secret society, but that barely seems to matter anymore by the time it’s unveiled.

Pretty amazing movie to watch (even though I fell asleep the first time). The curator is not the film’s narrator. The curator actually falls asleep once while droning on about the paintings, and the narrator whispers to us until he reawakens. The curator stages complicated tableaus, reenactments, like life-sized dioramas of the paintings in order to get a 3-D perspective on the hidden clues, which are in mirror reflections, light and shadow, and everything else. A movie all about mise-en-scene, so the paintings and stagings have interesting layouts, and the filming of them is interesting on its own. So many layers I don’t pretend to understand.

Below: Professional Jean Reno in his first film role. 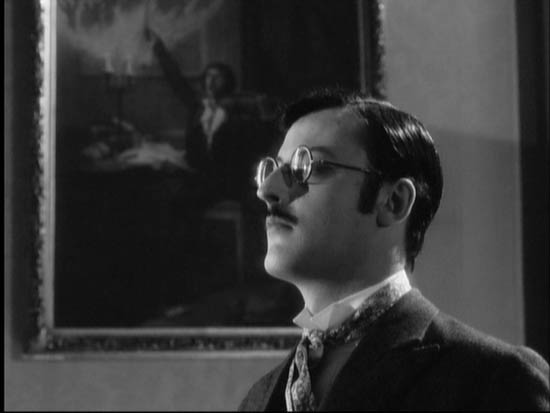 Completely wild. Loved it, though I don’t know who I could recommend it to. Guess I’ll just see more Ruiz movies. Not sure whether any/all questions are answered at the end… curator seems too obsessive to be able to see the truth anymore, and may be using the ritual explanation to justify his own ritualistic beliefs. The movie’s got a few visual freakouts, like the one below, but otherwise is a sort of fictional essay film.

Where the missing painting, the fourth in the series, should have hung: