I saw this ages ago and didn’t get it. Now that I’ve enjoyed Mon Oncle and seen Playtime a few times, I wasn’t thrown by Tati’s Buster Keatonesque style – series of gags setting up the next series of gags, with funny sound effects but almost no dialogue. Other notable similarities to Playtime: jokes about malfunctioning technology (mostly automobiles, but also an indecipherable train station announcement speaker) and an extended delay before the first appearance of our hero Tati/Hulot.

It’s a weirdly understated gag movie – some big slapstick scenes like when Hulot sets off a box full of fireworks, but mostly more subtle. There are enough unnamed characters intersecting in different ways in each scene to make Altman proud (I especially noticed a young woman with a Princess Leia hairdo).

I watched the original full-length version – most DVDs only have Tati’s own re-edit from the 70’s. I’m sure that by the time I rent the Criterion and watch the shorter version I won’t be able to precisely recall the differences. Half of Tati’s movies exist in multiple versions – Jour de fete is in black and white and color, Mon Oncle is in French and English and Playtime had a bunch of different edits.

Leia with an insufferable leftist who insists on talking politics while everyone is on vacation: 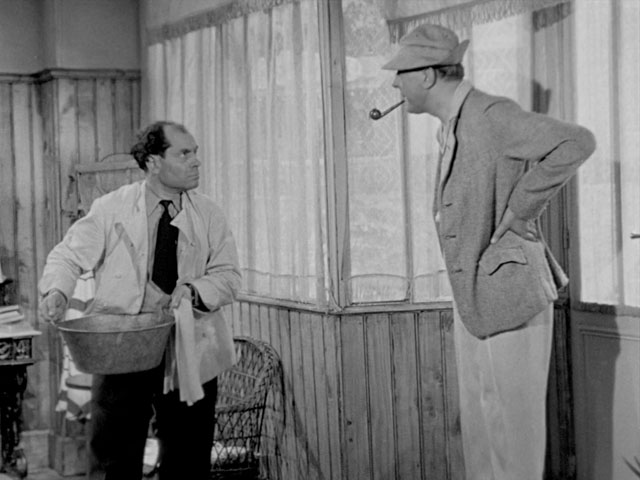