Hitch’s quickie, less extravagant follow-up to the great Rebecca. He didn’t quite get the cast he wanted, ending up with Joel McCrea (just before Sullivan’s Travels), the poor man’s Gary Cooper, and Laraine Day (of the Dr. Kildare movie series), the poor man’s Barbara Stanwyck. A wartime spy flick, rather stiff with loose and uninteresting parts but a few great thriller setpieces to balance them out. Katy and I started it for being a TCM Essential, but only I saw the second half.

Take it away, TCM:

Official U.S. policy was still one of strict neutrality. Despite the fact that the British government urged their most famous native, Alfred Hitchcock, to remain in America during this time, the director desperately wanted to contribute to the British war effort so he sought out a property that would allow him to make a pro-Britain statement. The subsequent production, Foreign Correspondent, is the story of an American correspondent in Europe who becomes committed to the fight against fascism during his investigation of a kidnapped Dutch diplomat, a situation that requires him to travel from London to Holland.

I’d say Joel was more committed to following a hot story than to fighting fascism, but he certainly gets caught up in it, leading to a fantastic Great Dictator speech into a radio mic at the end as air-raid sirens howl, possibly the most thrilling last-minute ending to a Hitchcock film I’ve seen. 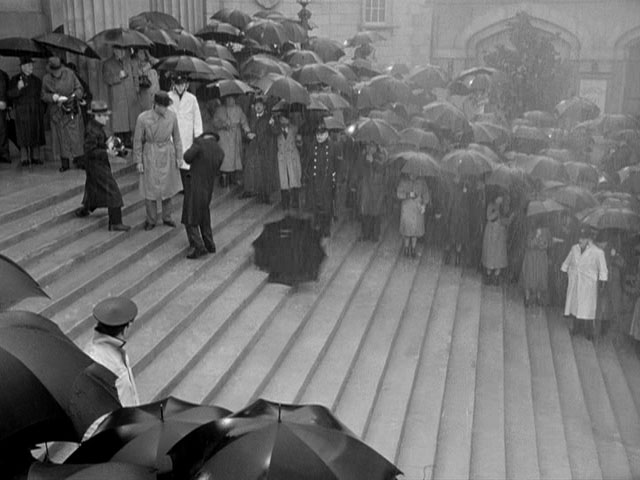 Van Meer, an Armin Mueller-Stahl-looking diplomat, knows a secret clause within a peace treaty that could help the other side when war breaks out, a macguffin that I never fully understood, but that’s why he’s kidnapped and tortured by baddies. Joel is present for VM’s assassination (my favorite scene, above), but smells a rat because the old man, usually very sharp, doesn’t recognize Joel although they shared a cab the previous day. In fact, a lookalike was murdered so nobody would search for the real VM. Joel follows the killer to a windmill for a fantastic sequence of hide and seek, then escapes from killers sent to his hotel room by first crawling out the window then using a comic room-service gag, is later assigned a bodyguard who tries to push Joel off a high building but falls off himself, and finally I was tuning out and didn’t follow exactly what led to the climactic plane crash, a miniature version of Lifeboat.

I read through D. Cairns’ post on the film looking for a great quote to steal, but they’re all great quotes, so I must instead link to the full article.