The Thin Man Challenge: I like to watch these movies with Katy, not think too hard about them, then see if I can remember a single plot detail a week later. Piecing it together as it comes back to me. Firstly, the series is now saddled with a kid and a celebrity dog, and they each get to waste fifteen minutes before the mystery can get started, then they’re essentially out of the picture.

Once again, Nick is some kind of celebrity detective, attracting much attention wherever he goes, allowed to wander drunkenly onto crime scenes and tamper with evidence. Nora gets involved in the case, but only as much as seems necessary to maintain the formula set up by previous movies. And speaking of the formula, Nick again rounds up the suspects in a single room at the end, reveals the killer’s identity, a struggle ensues, good guys win.

Nick’s friend Paul was what, a reporter? a cop? He’s accused of killing a bookie (and somehow his girlfriend Donna Reed gets arrested too), so Nick starts his own investigation, figures out some horse jockey shot himself by dropping a gun down a shower drain – so an apparent murder was a suicide – and some gambler named Benny found hanging in his apartment was actually set up – the apparent suicide was a murder. Turns out the killer was a police major, the corrupt police force collaborating with gangsters and gamblers – a weird message for rah-rah 1941 Hollywood. I guessed Donna Reed as the killer, only because by the end she’d only had about six lines despite being fourth-billed.

After seeing his name in the IMDB credits, I spent more effort trying to get a screenshot of Tor Johnson than in the rest of this write-up. Almost certain that he’s the one on top here: 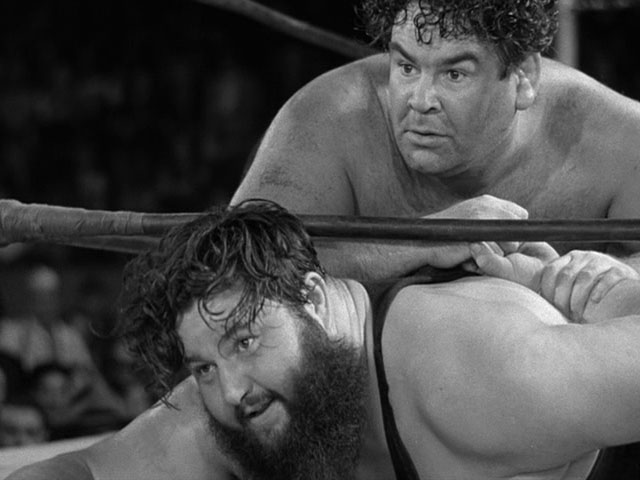 Writer Harry Kurnitz had made a name for himself a couple years earlier, writing three movies in under two years (each with a different cast) about a husband and wife detective team (Joel and Garda Sloane), which earned comparisons to the Thin Man series and won him a couple of Nick & Nora sequels.