Oh whoops – I planned to watch Weekend first, to go from the end of Godard’s beloved 60’s period, skip over his purely political post-May-’68 work with Gorin as the Dziga Vertov Group, and resume with Tout Va Bien and Letter to Jane. But I forgot, and watched this before Weekend. No matter, probably. But as I’d heard, the Godard of the 60’s never returned after ’68. This is so similar to his 60’s movies, despite the bright pop color, the custom-built sets, meta-movie voiceover, married-couple storyline and (especially) major stars. No, it’s as talky as The Owl’s Legacy.

Long-Distance Singer Yves Montand and newly-oscar-winning Jane Fonda were both known to be politically-engaged, and both were hugely popular at the time, so it was perfect casting for Godard and Gorin – plus an opportunity for them to gripe about Montand’s previous “problematic” political films. But G & G really want to polemicize at length, so they note in the voiceover that the stars were cast and given a jaded love story out of commercial necessity. 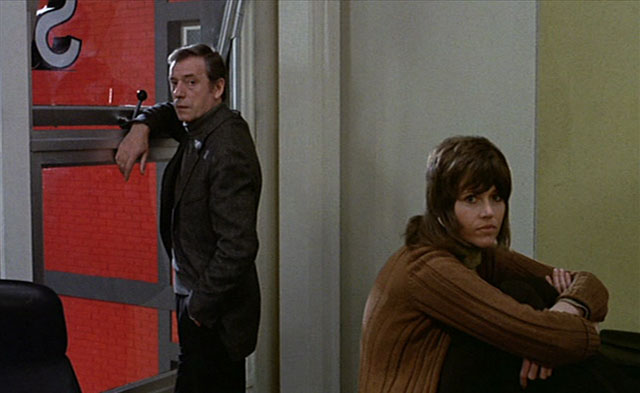 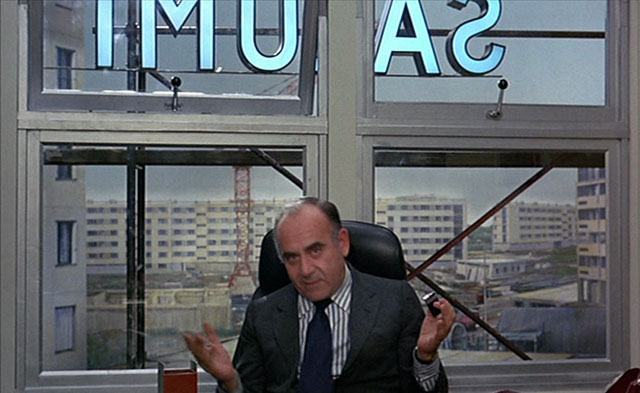 Opens with JLG’s most cinematic-illusion-shattering move yet, close-ups on all the checks he’s cutting for the film’s stars, technicians, sets and so on. The juicy center of the film (shot in nice loooong shots, many of them motionless) consists mainly of dudes giving long speeches about union labor, class divisions, the political system.

“Under a calm surface, everything’s changing. Everything’s changing within every class. And She and He, swept up in it, also change.” Yves is a formerly-idealistic filmmaker (“a screenwriter during the New Wave”), now doing commercial work. Jane is a radio news reporter, and the two are at a factory office when the workers hold a major strike and lock the boss in his office for five days. So we get interviews with the boss (Vittorio Caprioli of Il Generale della Rovere): “the glaring injustices of Marx’ and Engels’ day are over,” and the shop steward: “our salaries haven’t kept up with increasing production, and even less with corporate profits.” It’s weird for a leftist, pro-workers movie that I can easily find who played the company manager, but not which actor played Stacquet the shop steward.

Some business in a supermarket that I didn’t understand because I wasn’t paying close attention anymore, but the long back-and-forth dolly shot reminded me of the factory scene in Manufactured Landscapes. Yves and Jane at their day jobs. Scenes of the factory in operation, of struggle in the streets. A token love-story-resolution ending in a cafe, which seems extraneous even as a joke, since the couple never got any development.

Great cross-section of the factory offices: 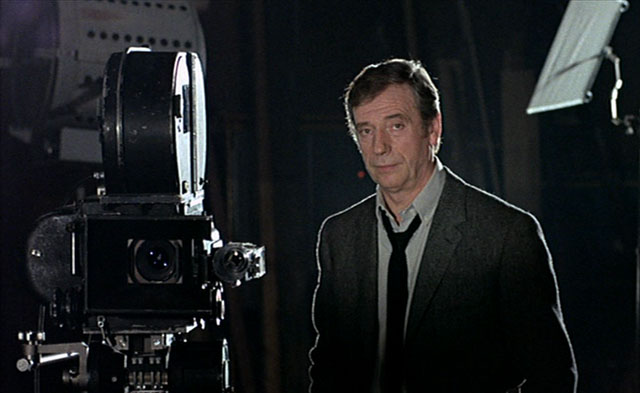 From an interview with a wide-eyed bathrobe-clad Godard: “It’s quite striking. When workers are interviewed [on TV], these people are given 15 brief seconds when they haven’t opened their mouths all year. We give them 15 seconds, or even three minutes, to speak. ‘What do you think of the strike? What do you think of your lot in life?’ Who can answer when he’s had his mouth sewn shut?”

An hour-long photo-essay posed as a letter to Jane Fonda, analyzing a newspaper photo of her in Vietnam talking (or, as Godard & Gorin rightly point out, listening) to some unidentified men. She’d visited the country after the filming of Tout Va Bien but before its release, starting the ridiculous “Hanoi Jane” controversy, during which the press took the actions of a movie star more seriously than the war itself. 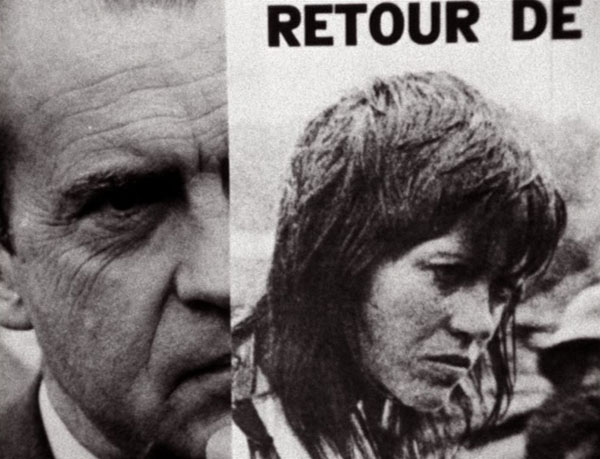 Godard and Gorin take turns narrating (in English), and each takes pains to avoid any interest in their voice, so the movie becomes a didactic lullaby. I got bored almost immediately.

See also: Every Revolution is a Throw of the Dice and Farocki’s Workers Leaving The Factory