There’s a new Puppet Master movie out this year, so I am falling behind – decided to watch the last of the “classic” series. It’s the Puppet Master clip show, featuring scenes from the other movies in roughly chronological order, with a framing story of an anti-Toulon woman reading a giant book, presumably the official novelization of Puppet Masters 1-7, then trying to get the secret of eternal puppet life out of some vaguely Toulon-looking guy (Jacob Witkin of the Evil Bong trilogy). She’s an assassin, who conveniently claims to have killed the survivors of previous movies, so no more sequels I guess. 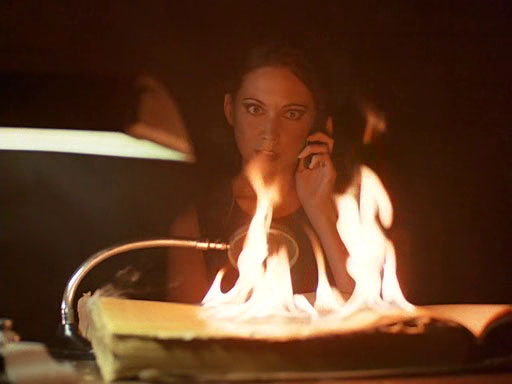 We start with the Greg Sestero movie, go through the nazi era to parts one and two, then the laser tag sequels. With all these craptastic movies crammed into one hour, the few decent performances stand out: Guy Rolfe, and surprisingly Cameron, the asshole computer rival in part four. I thought the flashbacks would be a “best of Puppet Master,” so a montage of murder scenes, but the writer/directors (ashamed, working under pseudonyms) assume we watch these movies because we care about the fleshed-out history of original puppetmaster Andre Toulon, so it’s all the mythology stuff (with some good murders mixed in). As a result, this is probably the best Puppet Master movie – but if you’re some kind of idiot who watched the previous seven of these, then there’s no need for it, unless we’re gonna need all this recapping in order to follow Puppet Master vs. Demonic Toys.

1993 was the year of Puppet Master 4, Remote (IMDB: “my best advice is to skip it”), Mandroid (from the writer of Dr. Moreau’s House of Pain), Invisible: The Chronicles of Benjamin Knight (sequel to Mandroid), Arcade (with Seth Green, “a virtual reality game begins taking over the minds of teenagers”), dinosaur flick Prehysteria, Robot Wars (Robot Jox sequel starring Barbara Crampton) and Subspecies 2.

Dollman and the nurse… can you tell how tiny they are?

Another guy is breaking into the toy warehouse from Demonic Toys? New security guard (Phil Fondacaro, the troll in Troll) doesn’t notice this guy just wandering in and dying on the floor, then the toys are back in town – plus an army guy and minus the teddy bear I think, taking the Puppet Master approach of adding and removing evil toys on a whim. 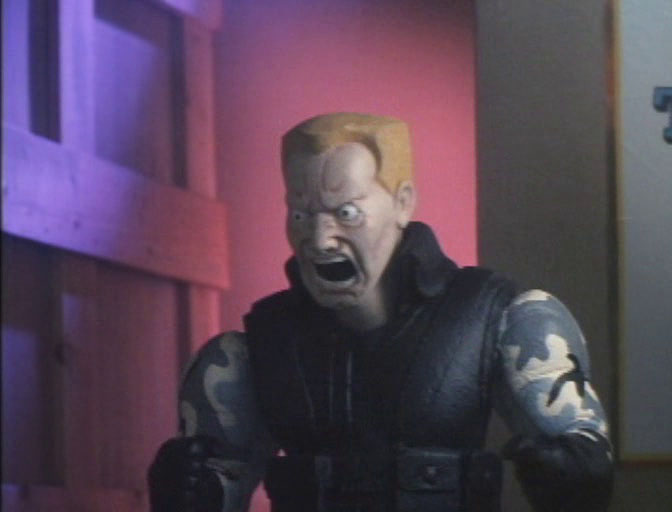 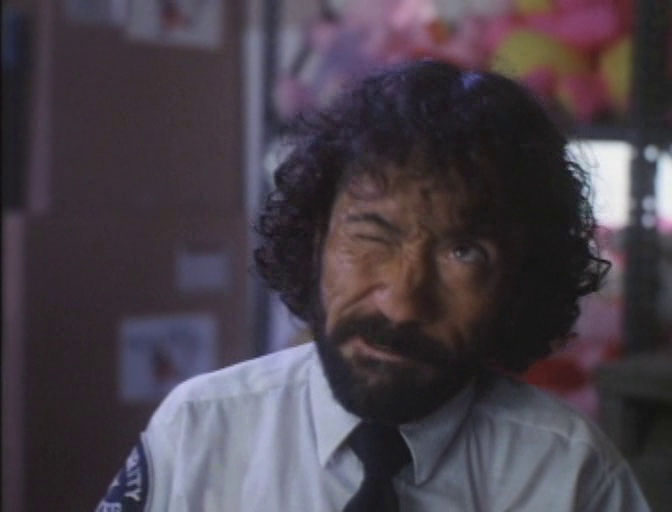 Elsewhere, tiny Dollman finds a hot tiny girl who “got shrunk by aliens” – I don’t remember this happening. Turns out this is a crossover between Dollman, Demonic Toys, and something called Bad Channels (“in space, no one is safe from rock ‘n’ roll”). How do I know? Because Dollman vs. Demonic Toys – only a one-hour movie – spends as much time as possible running flashbacks from its three predecessors. 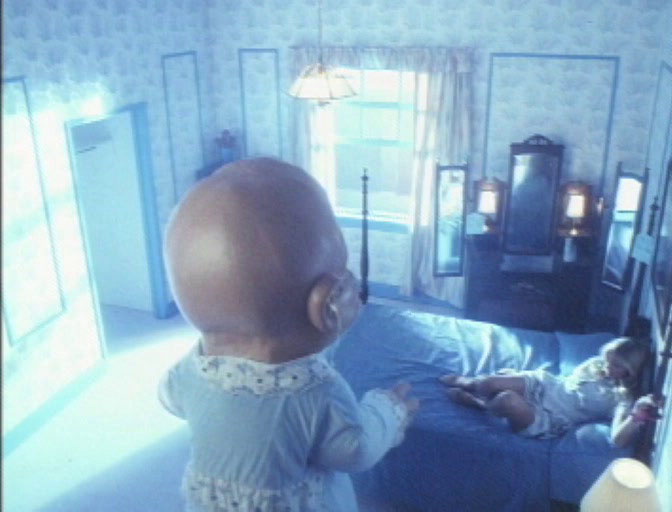 Can Dollman, shrunken Nurse Jude and Demonic Toys survivor Tracy Scoggins keep the Toys from taking over? Yes, easily. Dollman shoots them with his little gun and they explode. Sorry for the total lack of suspense. Before that, the Toys are warping prostitutes into another dimension in order to summon their master (the Puppet Master?), and the final showdown involves the Baby toy trying to rape the shrunken nurse. Directed by madman Charles Band himself and written by Tarantino friend Craig Hamann, both of whom should stay away from children.