Thought I’d watch some shorts tonight, starting with the Guy Maddin shorts listed in the previous post. Unintentional theme: none of them had any spoken dialogue!

Film (Emend) by Deco Dawson
Crazily-edited scratched, grainy black-and-white silent footage of hands? If I hadn’t already known that Dawson was involved with Guy Maddin (as editor and camera op on Dracula and Heart of the World), I easily would’ve been able to tell.

Same thing, except now it’s a boy shining shoes instead of a woman sewing. Some peephole photography and scary closeups of the bootblack-mascaraed boy. As far as falsely-aged avant-garde films go, this is thankfully closer to Maddin than Merhige, although it’s less captivating than it means to be. Good music.

Some Begotten image manipulation meets the time tunnel from 2001: A Space Odyssey accompanied by minimalist music and too much MPEG artifacting. Merhige fans may ask “HOW does he do it?” but I’d like to know “WHY does he do it?” Did jobs dry up after Suspect Zero? Some cool time-lapse of plant life for a second there. Made in collaboration with Haskell Wexler’s grandson. There was a “visual philosopher” involved, ha! The actor who played “son of earth” in Begotten (the dude who gets dragged around by druids through the second half) played “son of light” in this (seen above).

Handpainted film cut to jazz music, excellent in every way. I could watch this all day. First half is full explosive color, multiple layers, second half starts out all slow white scratch lines and finally gets crazy after a couple minutes.

Bread and Alley by Abbas Kiarostami (his first short) 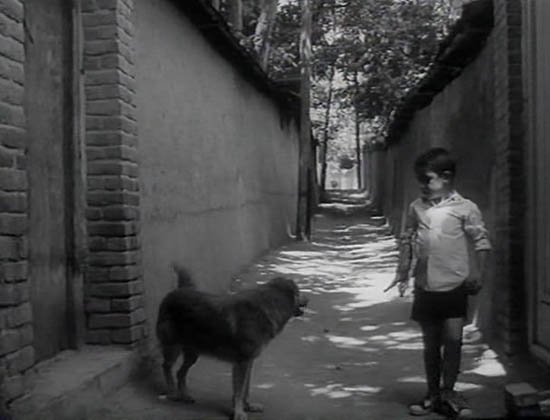 Opens with a prolonged shot of a boy kicking a can down an alley to the Beatles “ob-la-di, ob-la-da”. Boy can’t figure out how to get down the alley without being chased by a dog. Puzzles it out for a long while, follows an old man but he only goes halfway. Finally braves it by himself and accidentally makes friends with the dog by feeding it. No dialogue. A very happy little movie.

A jolly bit of madness out in a field. Not the funniest ten minutes of cinema I’ve ever seen, but worth watching. Some of these guys had a radio program called The Goon Show, which I’ve heard somehow led to this film which somehow led to Petulia and Strangelove and Steve Martin’s Pink Panther remake.

EDIT 2021: Watched The Running Jumping Etc. again in slightly improved picture quality, which didn’t elevate the comedy any – nothing new to report.