That Flicker Alley blu-ray set I threatened to buy at the beginning of the year, well I bought it. And besides being full of interesting avant-garde films beautifully preserved in high-def, it’s really well sequenced and presented. Gonna have to break this into a few screenings and posts since I’m taking so many screenshots.

City photography, mostly seaside and rooftop, floats by, with intertitles from a Whitman poem. Impossible to know how this looked in 1921 since by now I’ve seen hours and days of NYC photography. Buildings and ships still look like buildings and ships, so I was mostly interested in the few shots of people and traffic. Strand later photographed Redes and codirected Native Land.

In technique the film was simple and direct, avoiding all the so-called “tricks” of photography and setting. In a sense it was the forerunner of the documentary school which rose in the United States in the middle 1930’s … The picture’s emphasis upon visual pattern within the real world was an innovation for the times. 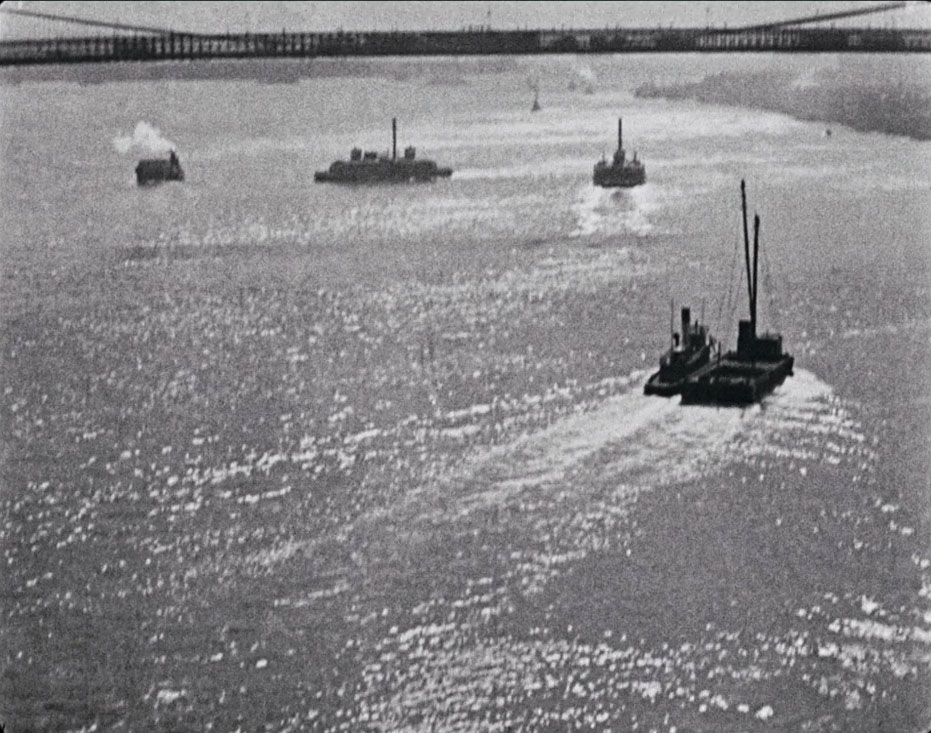 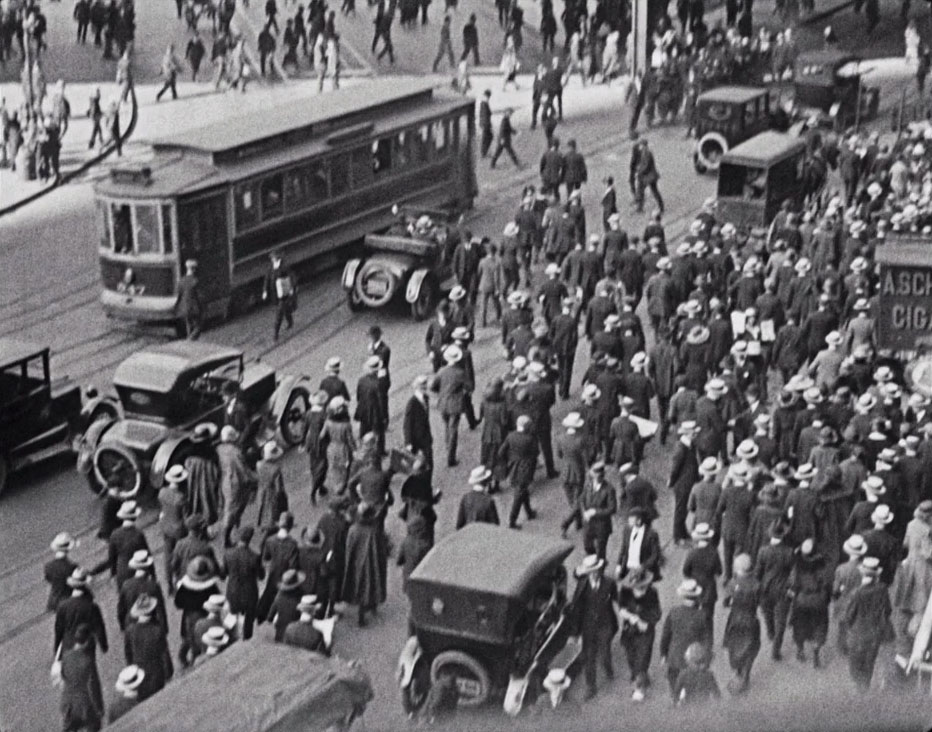 In Visionary Film, Sitney calls it one of the “two fundamental works of the graphic cinema from the 1920s made without animation,” along with Ballet Mechanique.

Duchamp’s purpose was presumably to create an artwork with minimal means, including quasi-found objects, the disks he had made for another purpose. His idea is clearly reflected in the title, Anémic cinéma, which suggests a weakness or thinness of means. “Anémic” is also an anagram for “cinéma.” 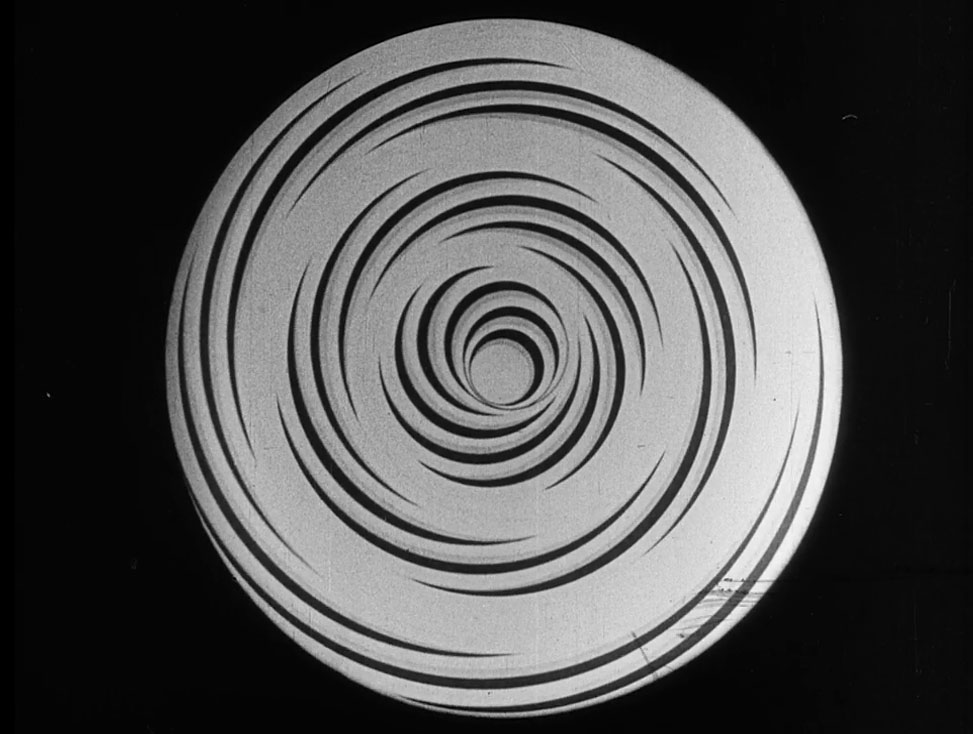 Still one of my favorite shorts ever. I love that Florey & Vorkapich were already this cynical about Hollywood in the silent era – especially great is the “babababa” mouth-flapping in place of speech. Would be a good short to run before The Last Command. 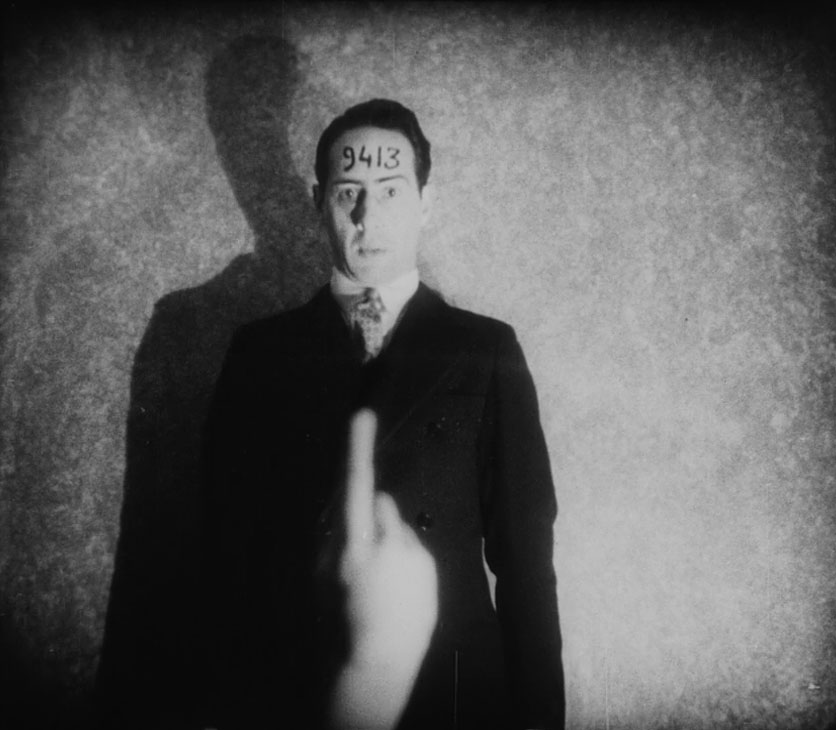 New York buildings, photographed straight ahead and jutting out in all directions, making this an appropriate follow-up to the city documentary Manhatta and the expressionist angles of 9413. Donald Sosin contributes a very nice piano score. Florey directed a Marx Brothers movie the same year. 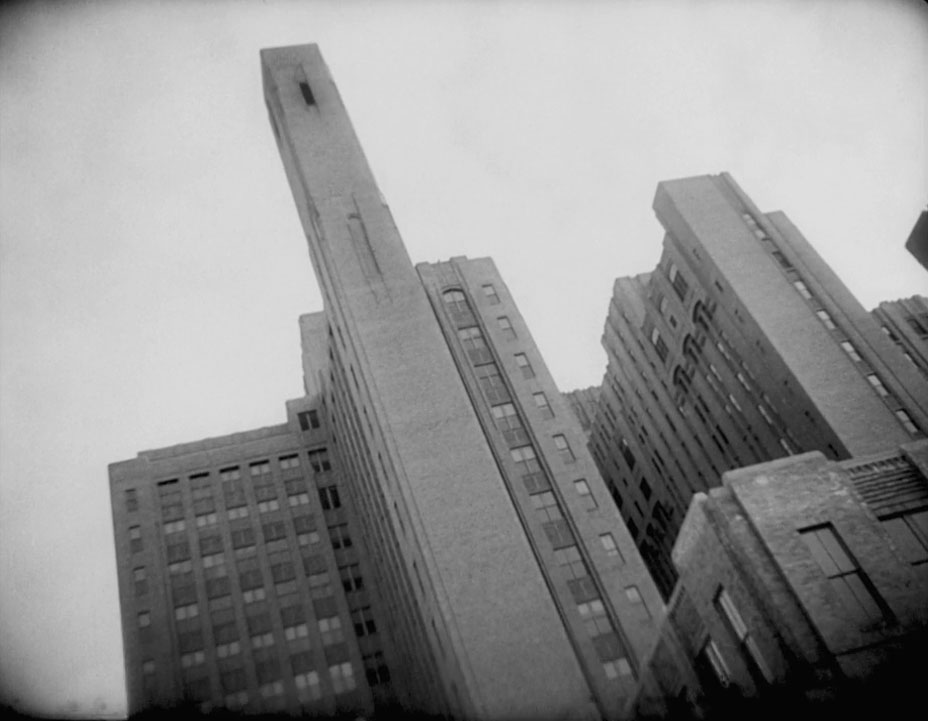 Pistons, meshing gears and other mechanics, beginning slow and simple and getting into crazier and faster gizmos. Really cool.

More New York scenes, this one more social than the structural interests of the others. Leyda had documentary cinematography and editing pretty well figured out by age 20, worked with Steiner, later with Eisenstein and went on to write film histories.

How much does expert ladies hair bobbing cost to-day? 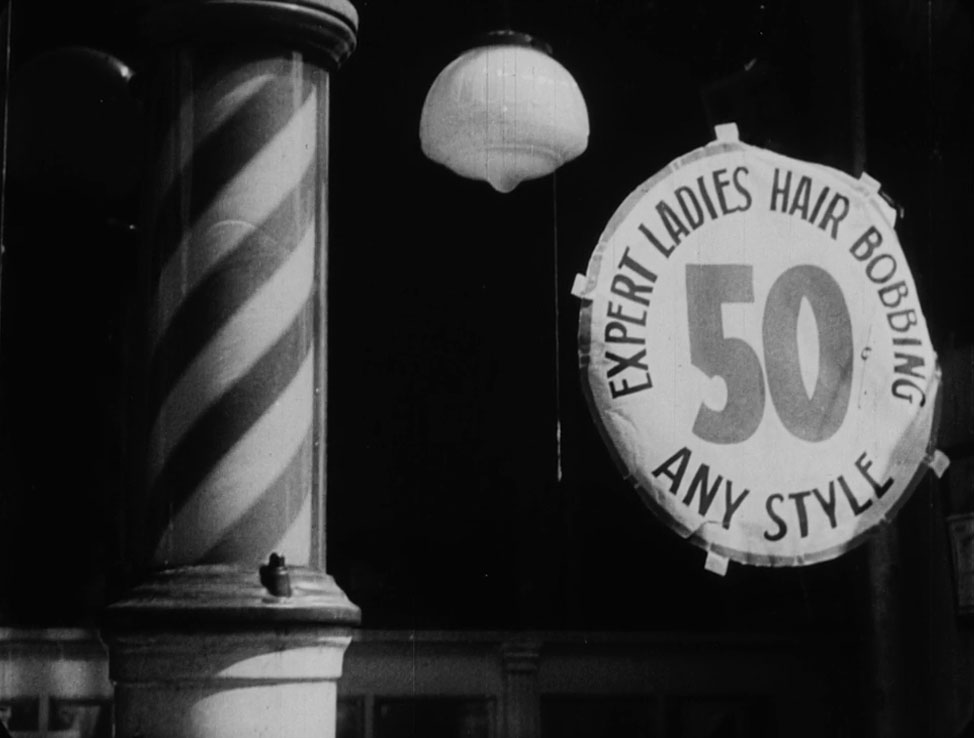 Leagues beyond the previous films in visual poetry. Bodies collide in slow motion, mirrored and refracted. Eventually a plot takes shape when an angel appears to woolen-bearded Lot and tells him to get out of town before it’s destroyed by a rain of fire (there’s some other stuff I didn’t catch, not being familiar with the bible story). Like I wrote for the same directors’ Fall of the House of Usher, “I still don’t know exactly what happened, but boy was it awesome.”

Jacobs called it “the most distinguished experimental sound film of the period.”

Lot in Sodom used a technique similar to that of The Fall of the House of Usher, but far more skillfully and resourcefully. It drew upon all the means of camera, lenses, multiple exposure, distortions, dissolves, and editing to achieve a beauty of mobile images, of
dazzling light and shade, of melting rhythms, with an intensity of feeling that approached poetry. Its brilliant array of diaphanous shots and scenes … were so smoothly synthesized on the screen that the elements of each composition seemed to melt and flow into one another with extraordinary iridescence. 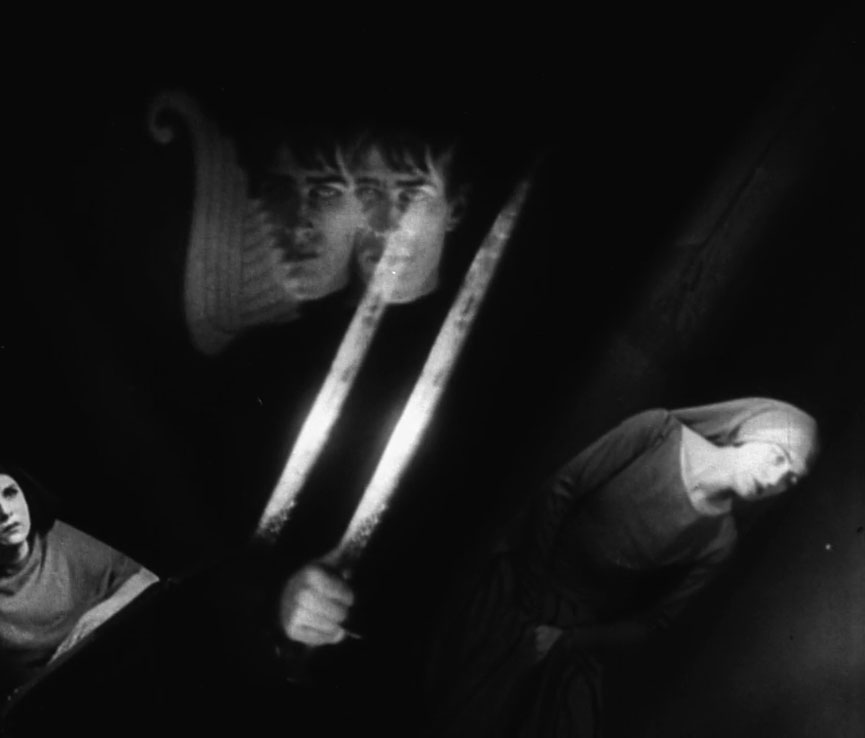 Visual poetry with no narrative – the first time that had been done, according to Etting, who is wrong (Man Ray, Hans Richter, Ballet Mechanique). Rough on the technical side, but it works for me. Dig the first-person camera sipping a cocktail and making out with an undressing woman. I didn’t feel the new piano score by Rodney Sauer was appropriately poetic. 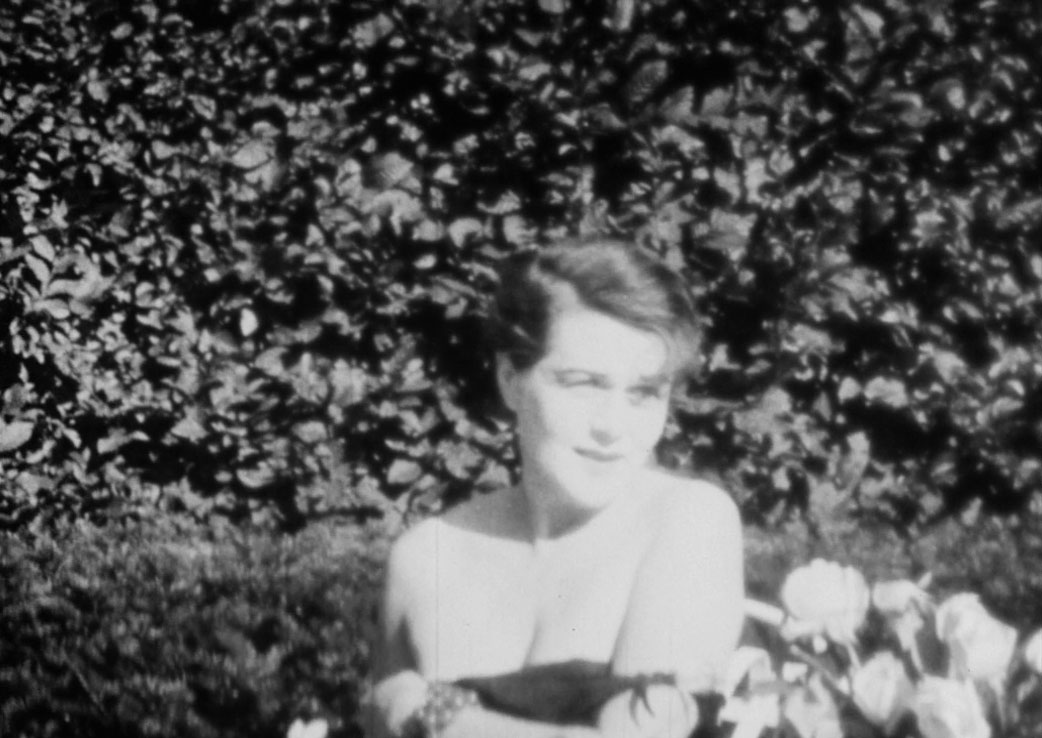 Floating shapes appear and move in sync with a Liszt song. Since it’s made with paper cutouts in stop-motion (which must have been aggravating) you can their shadows upon each other. 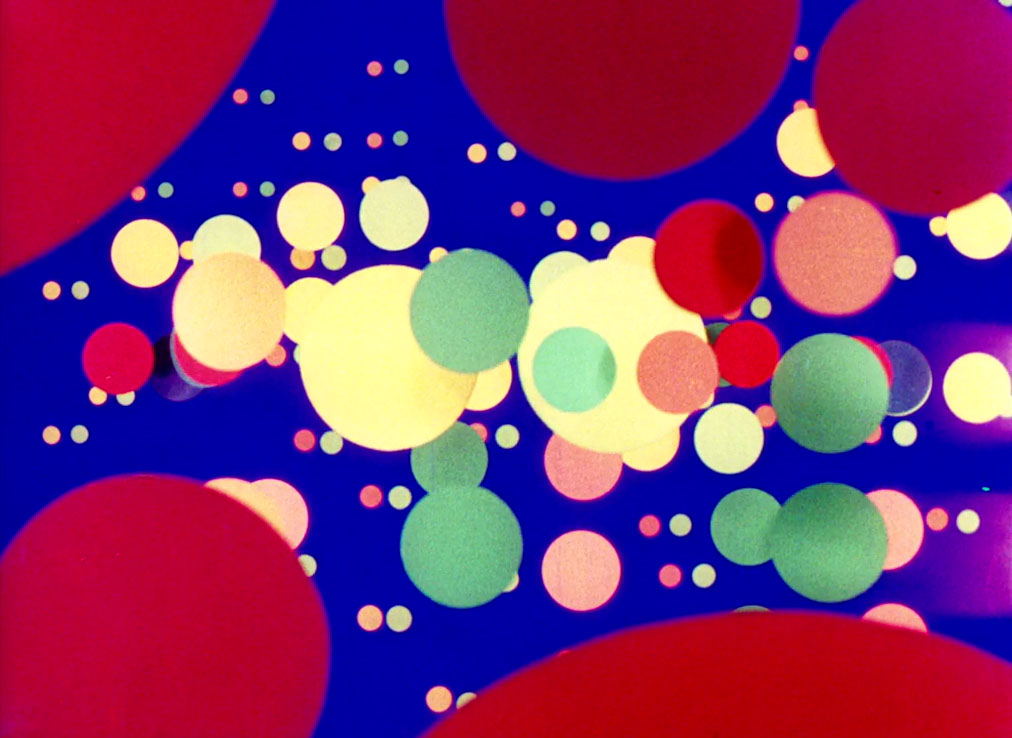 Cornell and his posthumous editor Lawrence Jordan throw together a bunch of things and run circus music under them all. Too many kids in a paper flower… what looks like a Melies movie… a cartoon printed inverse and upside down… mountain goats… a man vs. kangaroo fight in slow-motion. Before Spike & Mike or Everything Is Terrible or Star Spangled to Death, Cornell was the original curator of clip shows of wonderous things. 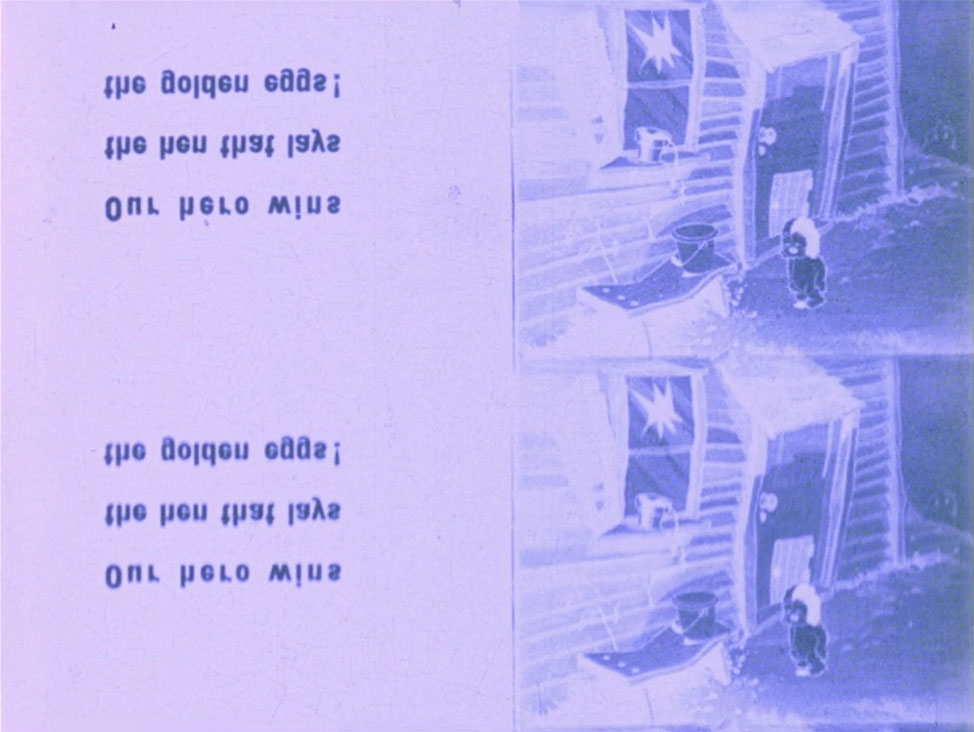