Enjoyable to watch but with less of a game-changing twist than I expected from the reviews, which I didn’t actually read, because I was warned that they might give away the movie’s game-changing twist. Anyway it sounds like the same twist as Force Majeure, which I’m hoping will be even better.

Engaged American couple is on a mountain trip through eastern Europe. She is Hani Fursternberg (Yossi & Jagger), and has a terrific naked introduction scene, and he is Gael Garcia Bernal (between The Limits of Control and No), without a whole lot to do except for one scene. At least I think this is the big twist: when some motherfucker pulls a gun and Gael’s instinct is to hide, thrusting his girlfriend into the line of fire – then almost immediately realizes what he’s doing and switches their positions. They go from being carefree, lovey hikers before that scene, to trudging unhappily in opposite corners of the frame afterwards.

Also on the trip, their Georgian guide Dato (played by an actual guide), who starts to become more important after the incident, opening up to Hani about his past since she’s barely speaking to Gael anymore. 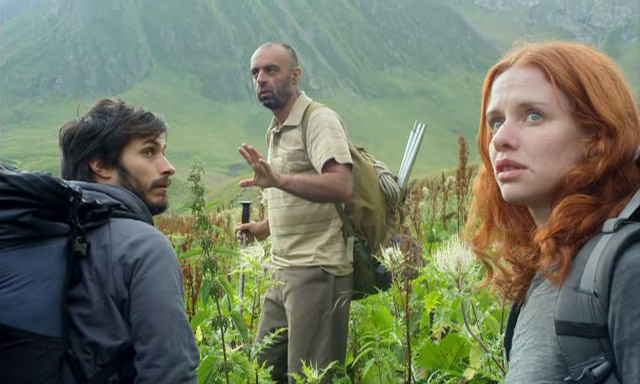 J. Kuehner: “Loktev persistently evokes a mysterious feeling that courses through us, at home and abroad, of beauty and dread pulsing in equal measure.”

Won an award at AFI Fest, played Locarno alongside Terri, Another Earth, Goodbye First Love and Policeman. Loktev made the acclaimed Day Night Day Night, which came out among a flurry of other terrorist dramas that I skipped. Cinematographer Inti Briones worked with Ruiz, shot Days in the Country and Night Across The Street. The best parts are between story scenes, massive wide shots of the scenery as our tiny heroes walk along and Richard Skelton’s crazy string music takes over the soundtrack.