Another post-Civil-War American small-town drama – I kept flashing back to John Ford’s Judge Priest movies. Our hero this time is more priest than judge. Pastor Joel McRae (I’d forgotten he was a cowboy actor when not appearing in Preston Sturges films) comes to town in the wild old days, marries Ellen Drew (same year as Baron of Arizona, still the queen of not making a strong impression) and whips the town into shape.

A bunch of years later they’ve inherited a nephew (13-yr-old Dean Stockwell), our protagonist who shows us around the rest of the colorful town. They’ve got a friend called Uncle Famous, there’s a guy named Chloroform (his mom liked the word), Alan Hale (father of the Skipper) is hardworking but godless farmer Jed, and Pastor Joel’s best friend is the town doctor (Lewis Stone, better known as Andy Hardy’s dad). Well, when the doctor dies his son takes over as doctor, and the son doesn’t like mixing his scientific work with the pastor’s religious work.

There’s lots of work for doctor and pastor since young Dean catches typhoid fever from the school well and soon all the kids in town have got it. The pastor cancels church service to avoid spreading disease, and the new doctor becomes the prime influence in town; people stop calling for the pastor’s services. Joel gets a little credit for eventually finding the source of the illness and alerting everyone, but maybe he could’ve talked to his son sooner. Kids were thought not to have any information worth knowing in the 40’s-50’s, let alone the turn of the century.

More trouble: Uncle Famous (Puerto Rican Juano Hernandez, later of Kiss Me Deadly) is being menaced by a mine owner who first offers to buy Famous’s land for more than it’s worth, then trashes the place and ruins his crops and offers to buy it for less (farmer Jed helps him rebuild), then sends the KKK cross-burning lynch mob after him. Big climax comes when pastor Joel protects Famous by reading a fake will deeding all his possessions to the masked mob members, shaming them into going home. 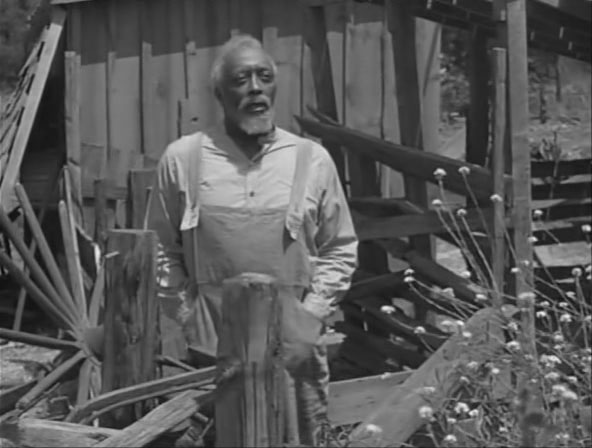 Happy ending: Famous is safe, the illness is passing, doctor and pastor are reconciled and Farmer Jed and his family all come to church the next sunday.

Early in the movie Jack Lambert is a town bully – but instead of a Forty Guns situation, after Joel McRae whups his ass into the mud he sits and laughs. We’re all still friends here. Nicely sets the tone of the town – even the bad guys here are good at heart – which makes the klan-turnaround ending ring more true.

I can’t tell much about Tourneur judging from this and Out of the Past and Cat People – all very different but quite good movies. It’s weird watching this so soon after The Sun Shines Bright – another post-civil-war movie named after a song lyric and featuring people playing Dixie and a racial-barrier-crossing white authority figure. Safe to say I liked this a whole lot, even if I’m not anxious to watch it again.

Stars in My Crown contains a ferocious attack on racism. It is one of the boldest of the post-war films, that supported the growing Civil Rights movement of the time.

This film is like Out of the Past, in that it shows evil forces laying siege to people in small towns. Both towns are idyllic places, filled with small businesses and homes. In both towns people love to fish, something that is treated as a source of friendship between grown-ups and kids. But the gangsters of the one film, and the typhoid and race hatred in the other, threaten to destroy the possibilities of harmony.

[Tourneur] is as exhaustive as Fritz Lang, in trying to find every interesting image possible in a scene, then staging the scene around it.