I’ve started doing this stupid thing where I’ve fallen behind on the movieblog so I watch bad movies while catching up. But then I watch the movie instead of writing and get even more behind. So now I find myself having to write about movies I never should’ve watched.

A girl takes a taxi ride… TO MURDER.

Oh no wait she has only been kidnapped. I think we are in Japan, but why does it look like Italy? “Kiss kiss… no more…” says a maniac while cutting a young girl’s lips off with scissors. Argento seems to have noticed that ugliness and torture chambers are the big thing in horror these days. Since his stories/scripts/actors always sucked, taking away his visual style is a terribly bad idea.

The killer looks at his laptop screen with a magnifying glass:

Another girl takes a taxi ride… TO MURDER.

Investigator Adrien Brody is on the case! He knows “how to deal with unpleasant people.” He intimidates a nurse. A kidnapped girl’s sister tags along. 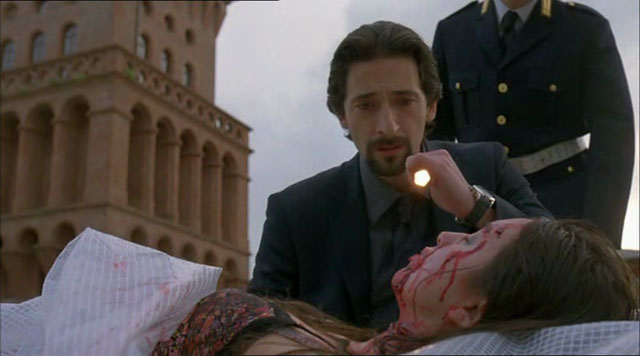 Time out for everyone to have a back story. You’d think from watching Argento movies that there are just tons of young women getting knifed to death in Italy.

The killer is killed. Will the missing girl be found? Tune in next week for… GIALLO! 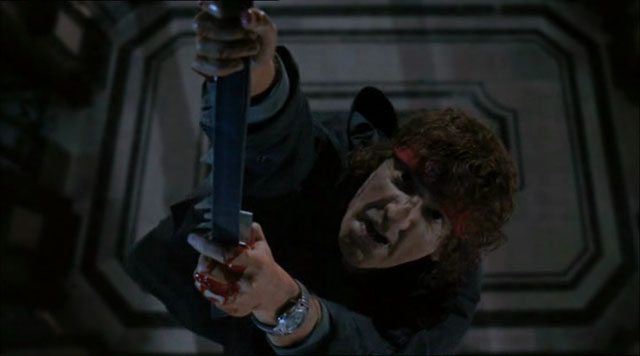 Emmanuelle Seigner (The Ninth Gate, Diving Bell and the Butterfly) is the frantic lead and Elsa Pataky (Snakes on a Plane, Beyond Re-Animator) is her frantic sister. Byron Deidra, who played the killer, won’t be appearing in any more movies, unless Argento makes another movie and needs another killer. The writers are working on John Carpenter’s next movie, which I might have to skip.