Last left off with the Master of None spring roundup, and besides the shows below I’ve also watched a couple miniseries, some Black Mirror and all of Neon Genesis Evangelion since then. It’s been a televisiony year.

Addictive escapist comedy. I watched season one for two weeks this summer, then the next three seasons in just a few days after the election. Kinda crazy about the show, and it helps that some of my former coworkers helped make it. Nice bookending Bob’s Burgers and Sealab references in season 4.

Most of the cast:

It takes a lot for me to start watching a new comedy show: years of increasing acclaim and/or recommendations from an unusual source like Cinema Scope. I finally, grudgingly, checked out the show about the former sitcom star who is a horse and the wreck of his current life, and it’s good.

I skipped the last season of Arrested Development then watched all the shows by its former cast members, so Will Arnett plays BoJack. With Amy Sedaris as an agent/cat, Paul F. Tompkins as an actor/rival/dog, Alison Brie (Community) as the dog’s/horse’s shared human love interest, which sounds gross out of context, Aaron Paul (Breaking Bad) as BoJack’s roommate and Kristen Schaal as his TV daughter.

And Patton Oswalt as a publisher: 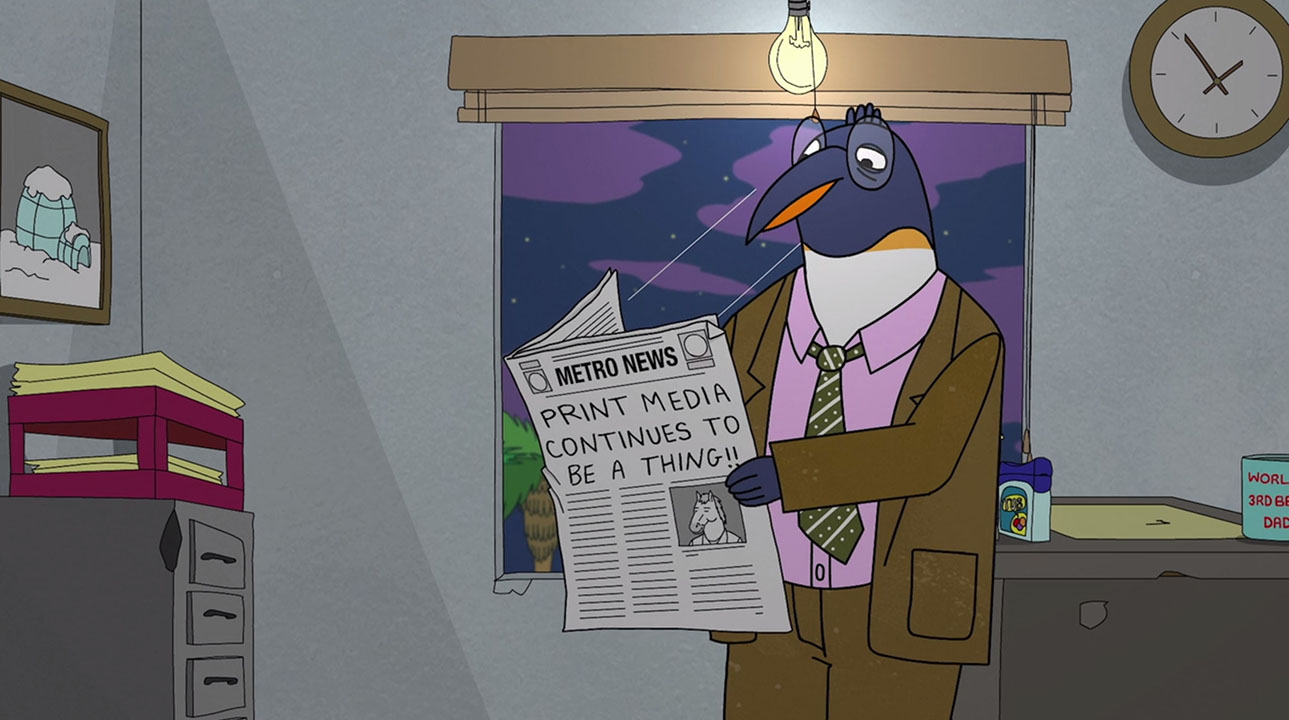 A bit too much Tina Fey – is it okay to say that? And sometimes Tituss can be overwhelming. These are minor gripes about a nearly perfect show. This year Jacqueline dates David Cross, Lillian fights against gentrification, Kimmy’s bunker-mates make regular appearances, and Tituss dates construction worker Mikey.

I appreciate the concept very much, taking old fashioned ideas of television and making them brand new, and embracing silence and stillness in a unique way. And Louis has lined up a dream-come-true cast, so the acting is always a pleasure to watch. He has also written a relentlessly grim show that ends with his character’s murder at the hands of his psychotic brother, with some suicide and cancer and cheating and abandoned children and drunkenness and depression along the way. For every weirdly wonderful scene, like David Blaine being berated and thrown out for doing magic tricks, or Steven Wright quip, there’s fifteen minutes of everyone feeling lousy. Complaints aside, I’ll buy anything Louis sells, and more promptly next time.

Yay, Jerry Minor. But for the most part, this show is juuust barely maintaining my interest, and I think I’ll probably check out a bunch of other things instead of continuing. For instance, the guy from Review was in a few episodes – I wonder if season two of his show is online anywhere.

Eugene Mirman works on becoming a stand-up comic whose jokes revolve around vodka so his big brother Sergei (Steve Cirbus, 89th billed in Bridge of Spies) takes over the threats and the killing. Zoe Lister-Jones has the thankless girlfriend role, Mather Zickel takes over as bodyguard, and Todd Barry plays himself.

I’ve become more ambivalent about watching this show about aggressively self-involved young white people… still into it, but I’m also reading The Brooklyn Wars and can’t pretend I’m not noticing the problems. But hey, Ray is joining the city council so there’s hope for more socially-aware content in the future, and I heard season five is really good, though I might take a break.

What else is happening? Hannah’s writer’s retreat thing didn’t work out, she becomes a teacher and dates a coworker, Marnie breaks up Desi’s engagement, Caroline gives birth, everyone seems frustrated with everyone else (or maybe that’s me?).

Well, after expectations so absurdly high that I couldn’t bear to even watch this for almost a year, that was… not bad. Wish I’d known that the fifth “episode” was an hour-long behind-the-scenes thing – I kept thinking it was a self-reflexive joke and would turn into more comedy. Special guests Key & Adsit are a nice touch, and Tom Kenny’s appearances are always highlights. More episodes now, please.

One of the few things keeping us sane these days.

Didn’t take notes on any of these, but enjoyed ’em all.

I think we watched four episodes of Key & Peele, so that’s half of season one. Haven’t fully invested yet in Enlightened, Lady Dynamite, Documentary Now or Steven Universe. Abandoned Shameless and probably a couple others.